Kourtney Kardashian and Travis Barker took a romantic bike ride alongside Venice Beach over the weekend.

Kourtney Kardashian, 42, and Travis Barker, 45, are living their best life. The couple, who have enjoyed a very public, PDA-filled relationship over the last few months, gave fans a closer look at their romance with a series of photos and videos Kourtney shared on Instagram on July 19 — photos and videos that she captioned, “weekend.”

In the first image from the photo dump, Kourtney is seen wearing an orange and black mini dress with an oversized black blazer. She opted to wear her dark tresses with a middle part, straight down her back as she playfully posed for the camera. The photos that followed included one of her sporting athletic wear, and another of her sporting a diamond skull anklet, which we can only assume is a gift from her boyfriend. And in one of the videos Kourtney posted with the slideshow, she and Travis could be seen taking a romantic bike ride along Venice Beach.

The relaxed couple opted to wear matching ensembles for their sexy date. In the video, Kourtney flipped the camera to give her 132 million followers a look at the sand, ocean, and Travis riding on his own bike right in front of her. In one photo that accompanied the video, Travis reached out for her hand, while riding along the beach. The duo looked as relaxed as could be while soaking up the sun. 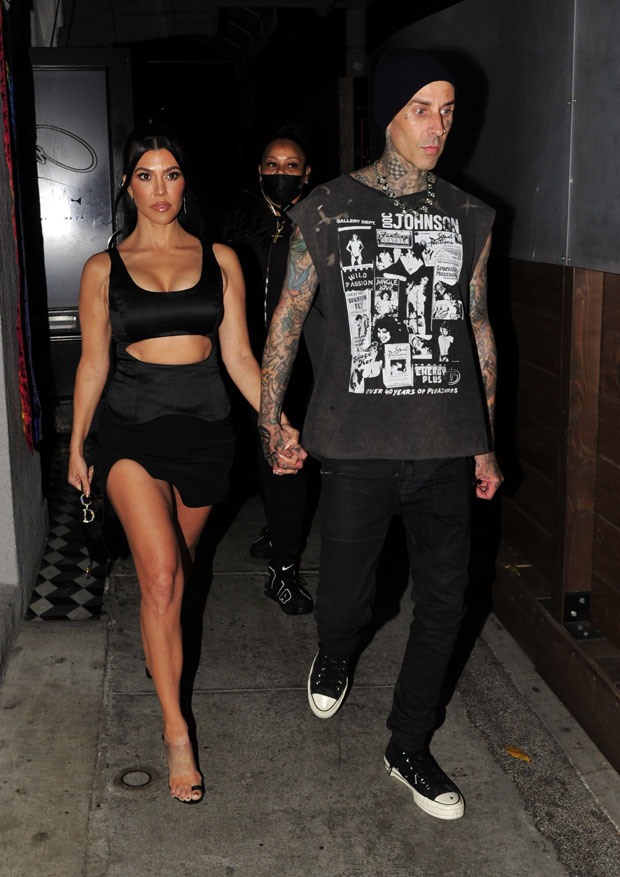 In true fashion, Travis had the sweetest reply to the photo dump by saying, “You’re my favorite,” which of course, sent fans on a loop as they quickly flooded the comments with their approval for the relationship. “You deserve all the happiness in the world babe,” one fan said in the comments along with heart emojis and the raised hand emoji. While another stated, “YOU AND TRAVIS ARE LITERALLY THE CUTEST.” One fan even went as far as saying, “I can see you marrying this one.” And interestingly enough, The Sun recently reported that Kourtney and Travis secretly got engaged during a recent trip to Las Vegas.

According to the report, the lovebirds got engaged during their romantic getaway to Sin City and plan to marry later this year. “She doesn’t want a ‘show wedding’ like her sisters, just a beautiful, intimate celebration where it’s about making a new family,” the report claims.