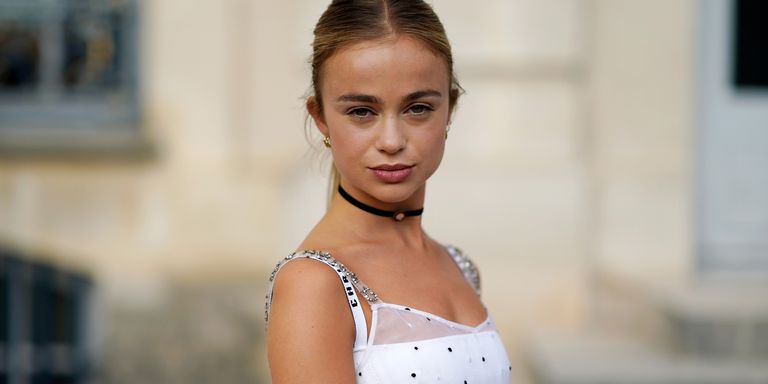 Prince Harry’s chic third cousin, Lady Amelia Windsor, reportedly won’t be at his wedding to Meghan Markle. The 22-year-old and her siblings didn’t get invites to the ceremony or the reception, according to The Sun.

“They were a little surprised not to be invited as they were looking forward to going,” a friend of the young royal told the paper.

“Amelia is creating quite a name for herself with her modeling and Instagram posts,” the source added. “Perhaps Harry just wanted to keep the family invited to a small number or maybe he didn’t want anyone upstaging the bride.”

Lady Amelia has previously kept tight-lipped about her attendance at the royal wedding. When asked by The Telegraph if she’d be present, she replied, “I can be quite last minute because I’m all over the place. Sometimes you can be thinking ‘Oh my gosh, what am I wearing?’ on your way there. It’s a learning experience with each thing you go to.”

She wasn’t the only royal who was snubbed for the May 19 festivities. Just last week, Duchess Sarah Ferguson (AKA Fergie) was reportedly not invited to the second, more private wedding reception, even though her ex-husband, Prince Andrew, and children, Princess Beatrice and Princess Eugenie, did receive invites.

Although Lady Amelia won’t be a royal wedding guest, she’s already stepping into the spotlight in her own right. Here’s what you need to know about the stylish member of the royal family.

Her grandfather, the Duke of Kent, is first cousins with Queen Elizabeth II. Her parents are George Windsor, the Earl of St Andrews, and Dr. Sylvana Tomaselli (her royal title is Sylvana Palma Windsor, Countess of St Andrews), who is a historian at the University of Cambridge.

She attended Meghan’s first Christmas luncheon with the Queen.

The Queen hosts a pre-Christmas luncheon at Buckingham Palace every year that includes extended members of the royal family, and the event on December 20 marked Meghan Markle’s first time attending.

In addition to more senior royals like the Duke and Duchess of Cambridge, Lady Amelia Windsor was also present. She, like other guests for the fête, was photographed in the car on the way in. It’s unknown whether she and Meghan actually met.

She was named “the most beautiful member of the royal family.”

In 2016, the young royal made the cover of Tatler magazine, a British high-society glossy, which dubbed her “the most beautiful member of the royal family.” Her cameo also marked the first time a royal covered the magazine since 2008, when Princess Eugenie was featured for her 18th birthday, according to the Daily Mail. Though she had always been a royal, Lady Amelia really was put on the map after this magazine appearance.

Lady Amelia has walked for Dolce & Gabbana two seasons in a row. She made her runway debut for the Italian brand’s Fall 2017 show, and walked again for its Spring 2018 presentation.

She’s a frequent fashion week attendee—and her style is impeccable.

When Lady Amelia’s not on the runway, you can find often find her in the front row in London, Paris, or Milan. She also flaunts her chic-meets-cool wardrobe for the throngs of street style photographers outside the shows.

Her involvement with fashion goes beyond modeling. She’s worked for Azzedine Alaïa and interned for Bulgari during her time abroad, according to The Telegraph.

“I would love to make a contribution to any aspect behind the creative process. On my year abroad I want to really further my understanding of every aspect of a fashion house: from the making of the fabrics to the production of a catwalk show,” she said in an interview last January.

She’s a student at the University of Edinburgh.

According to Tatler, her scholarly activities include reading French and Italian and participating in student productions like The Crucible. Before starting college, she took a gap year in 2014 to work for a charity called Veterans Aid, which supports veterans with finding homes, overcoming addiction, getting food and other issues.

The 22-year-old, known on Instagram as @amelwindsor, currently boasts over 37,000 followers. She often posts about her enviable trips abroad, red carpet moments, fashion events and downtime with friends.