EXCLUSIVE: ‘Who would want a mother-in-law like that?’ Laila Rouass’ family hit out at Ronnie O’Sullivan’s mum for calling the actress a ‘sl*g’

Laila Rouass’ family have hit out at Ronnie O’Sullivan’s mother for branding the actress a ‘sl*g’ and said they’re relieved the couple never married because ‘who would want a mother-in-law like that?’

Footballers’ Wives actress Laila, 50, announced her split from Ronnie O’Sullivan, 46, on Twitter on Wednesday following a nine-year engagement which was overshadowed by a toxic family feud.

Ronnie’s mother Maria reportedly took an ‘instant dislike’ to Laila and called her ‘s**g’ during a bitter row, the snooker star’s sister Danielle alleged in an interview in 2020. 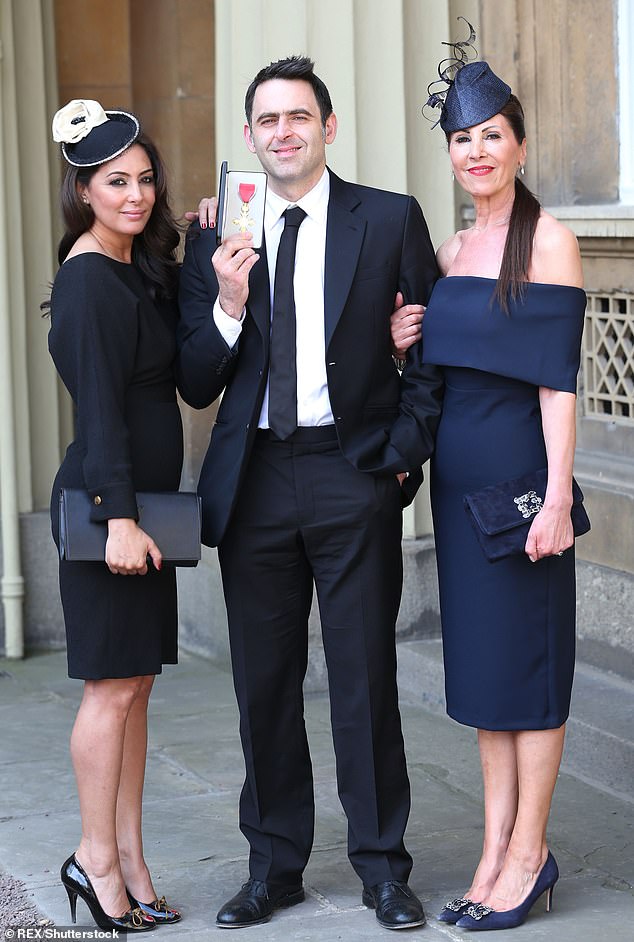 ‘Who would want a mother-in-law like that?’ Laila Rouass’ family have hit out at Ronnie O’Sullivan’s mum Maria for calling the actress a ‘sl*g’ (pictured together in 2016)

She also claimed that Maria labelled Laila a ‘prostitute’ and had her number saved in her mobile phone under the name: ‘The revolving fanny.’

But a female relative of Laila’s, who did not want to be named, slammed Maria for her attitude, claiming that it did not help Laila and Ronnie’s relationship.

They told MailOnline: ‘We are a big family with good values and believe in conducting ourselves properly and behaving and speaking decently. I don’t feel that it’s respectful to talk about Laila in this way.’

‘Ronnie’s mum’s attitude in the relationship has not helped. She does not sound like a very nice person to me. It’s probably better that Laila and Ronnie didn’t get married because who would want a mother-in-law like that?’

Laila, who has six siblings, hails from a large East London family that originates from Morocco and is well known in the area where they live. 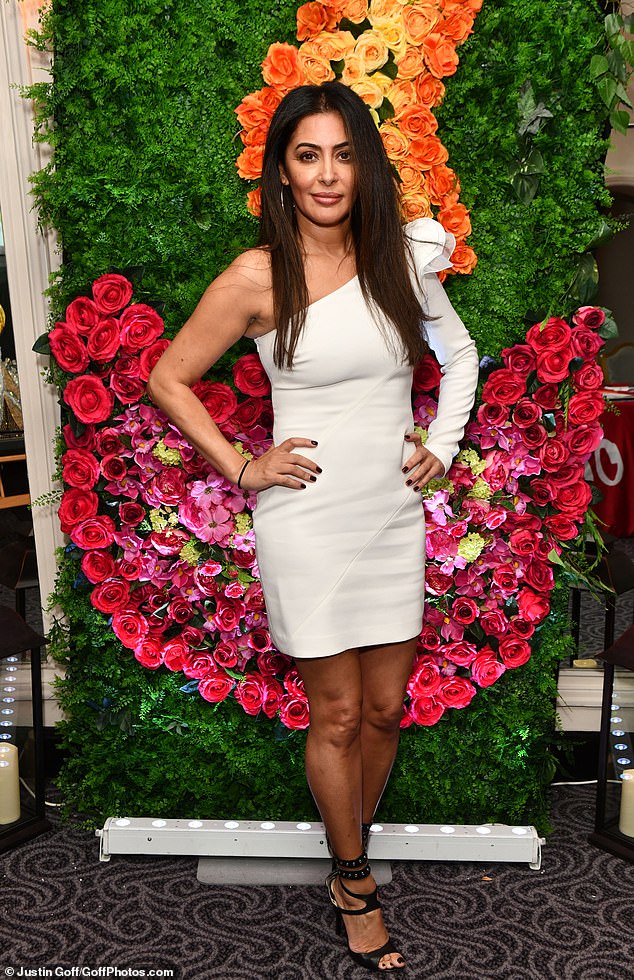 Made an announcement: Footballers’ Wives actress Laila, 50, announced her split from Ronnie O’Sullivan, 46, on Twitter on Wednesday following a nine-year engagement

The relative added: ‘Laila and the rest of the family are very humble. None of us make a big deal of the fact that she’s a celebrity and she does not behave like a big star.

‘Laila’s parents and siblings don’t discuss her business with us, even though we are quite close, and we didn’t know about the split until we read about it in the media. But from what I’ve heard nothing major happened in the relationship that led to the breakup.’

The relative added: ‘Laila is a strong, beautiful woman who knows how to take care of herself. I’m sure she will be able to find another man quite easily because she is a good person.’

Laila broke her silence about the split on Thursday with an Instagram post about ‘manifesting a new life without someone you love.’

‘It can be a wonderful teacher. Using self-compassion and manifesting a new life without someone you love can still lead you to a place of joy. Thank you for your kind messages.’

Announcing her split from Ronnie on Wednesday, she tweeted: ‘After nearly ten years of love and memories, Ronnie I have parted ways. Peace and love to you all. Laila X (sic)’ 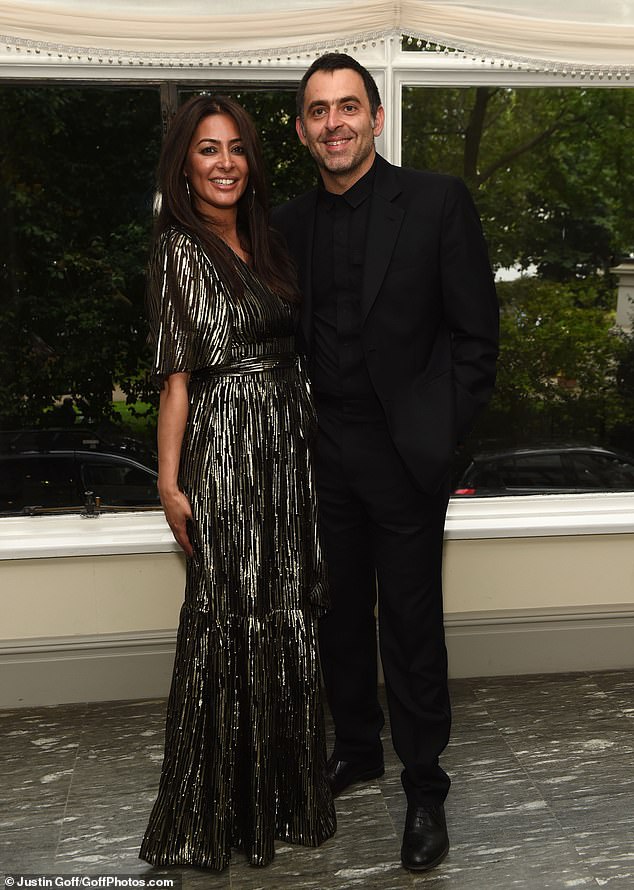 Exposing the animosity Ronnie’s mother had towards Laila, his sister Danielle revealed in an interview with The Sun in 2020: ‘Ronnie has given Mum so much help in the past.

‘She has shown me Laila’s number saved on her phone under ‘The revolving f***y’ and has apparently told Ronnie, ‘She’s just a prostitute, she’ll sleep with anyone’.

Danielle added: ‘She told me he goes for the same birds and Laila is the one who will catch him out. But Ronnie is so in love with Laila. He’s bought her a diamond ring, though he says they’re not engaged. They split up last year then got back together.’

The couple’s split comes after Ronnie saw his snooker wealth rise by almost £500,000 last year while Laila’s fashion company dipped £16,000 into the red.

The hotshot former world champ, nicknamed the Rocket, had assets of more than £2 million up from £1.5 million in his firm Ronnie O’Sullivan Snooker Limited.

He remains snooker’s most charismatic player and last year won £100,000 after triumphing in one major tournament.

In contrast Laila’s firm BagMyShoes Limited had assets of £36,100 but owed creditors £51,400 putting it in the red, according the accounts. 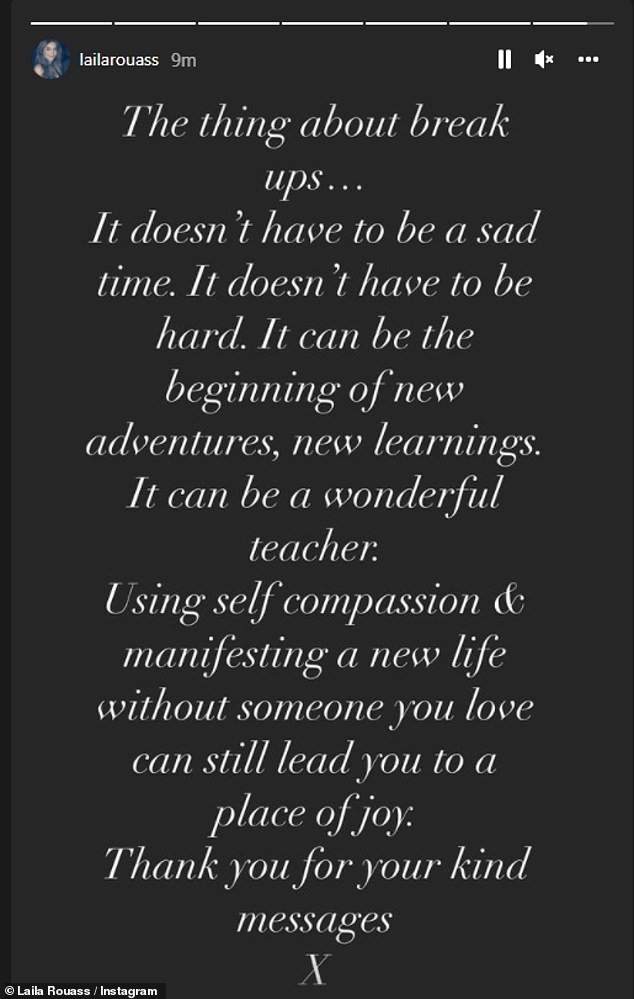 Self improvement: Laila took to her Instagram stories on Thursday to thank her followers for their ‘kind messages’ and the break-up can be a ‘wonderful teacher’