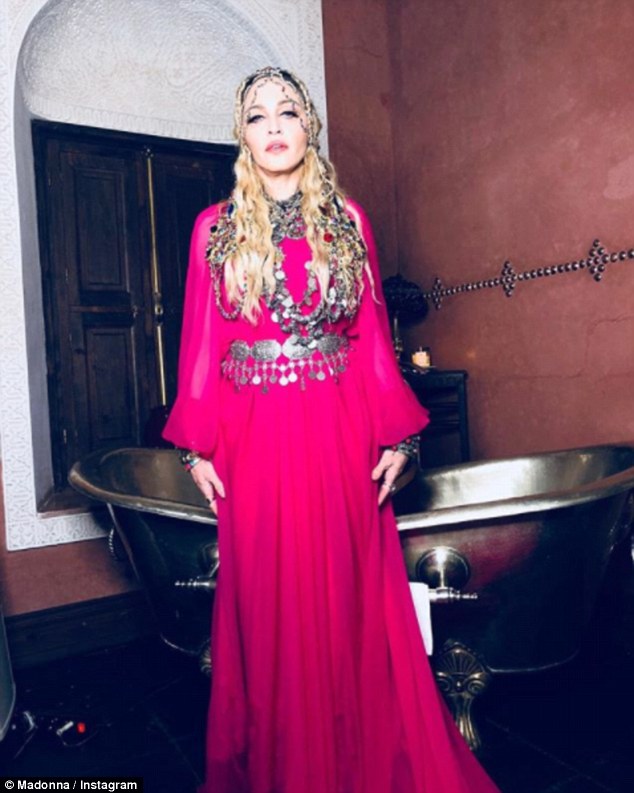 Party girl: Madonna is throwing an extravagant five-day bash at a Moroccan palace to celebrate her 60th birthday, and looked sensational as she partied away on the first night 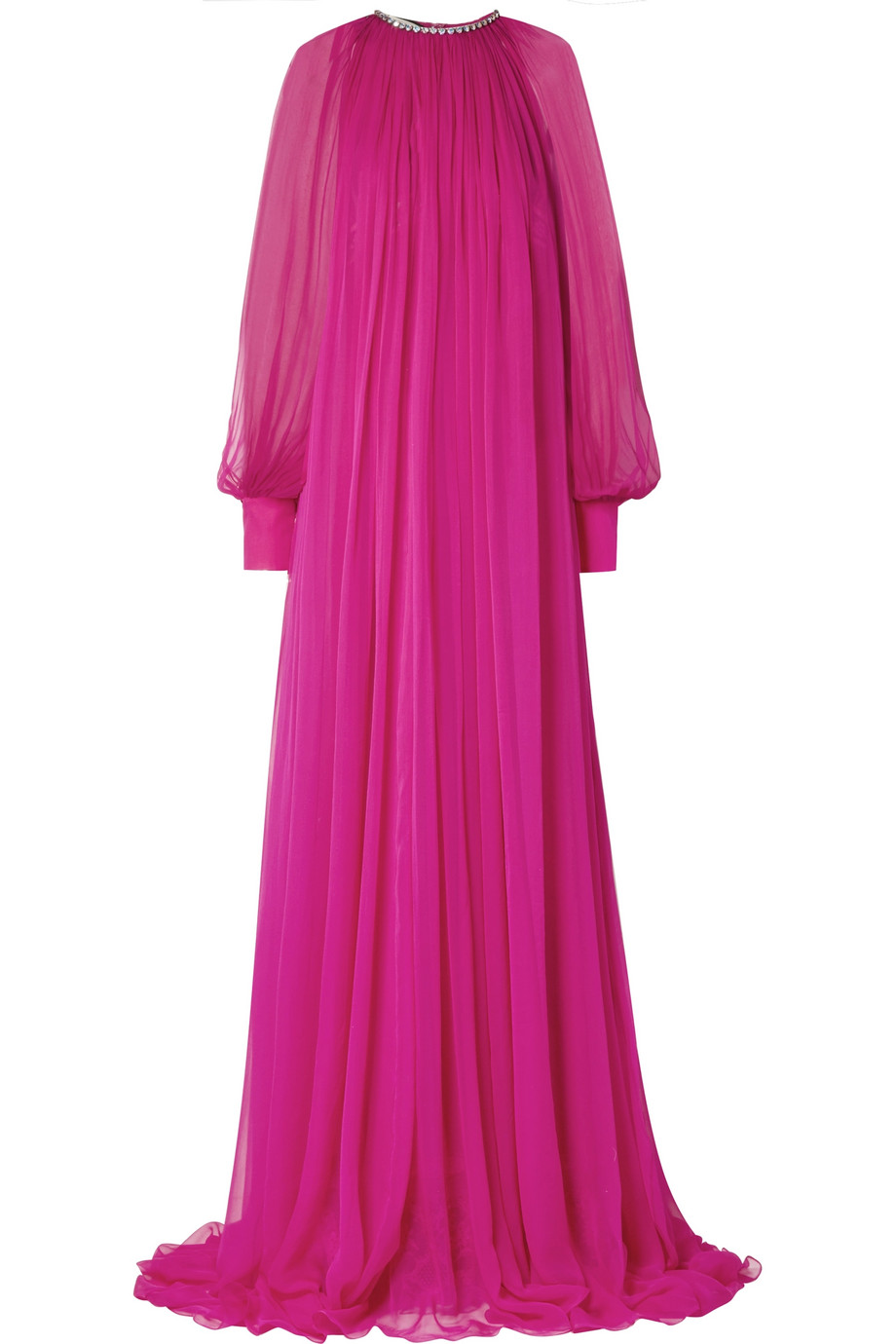 Can you believe Madonna has just turned 60? Well, we can't here at Fashion Finder, but what we can believe is that the Queen of Pop celebrated in style … and had a five-day party, too!

Not to do anything half-heartedly, the singer partied in Morocco and shared just some of the occasion with us via social media. In a few snaps, we caught her wearing this hot pink Gucci dress and we're seriously wondering how on earth we can get our hands on it.

From the billowing silhouette that falls to the floor, sheer fabric and cuffed sleeves it really has all the makings of a statement piece you'd only expect from Madonna … and Gucci!

So if you can spare the $8800 price ta,g then click (right) to buy the dress at NET-A-PORTER. Otherwise, simply shop below for our roundup of alternatives that'll still wow the crowd. We've got our eye on this one by In The Style… 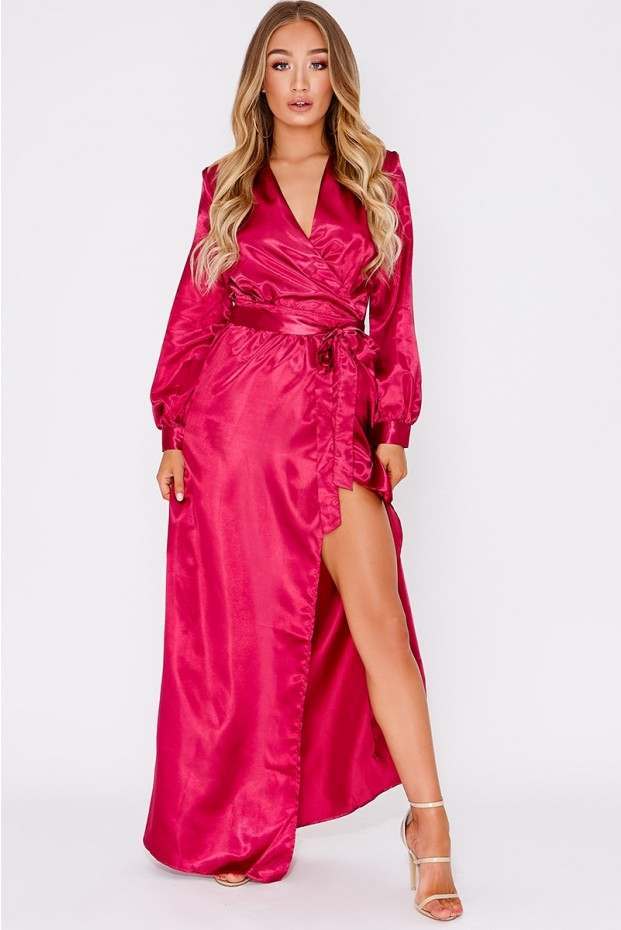 Jennifer Lopez sizzles in snake print as she puts fabulous…

Madonna, 59, wears her PAJAMAS while out in NYC… after…

Next to another, she wrote: ‘Yes Bishes Its my Birthday! Thank you to my fans and friends all around the world! #berber #bedouin #marakesh #magic #inspiration #blessed (sic).’

The third image showed her in the desert, with men clad in blue robes and traditional hats, sat on horses behind her, holding up torches to light her way. 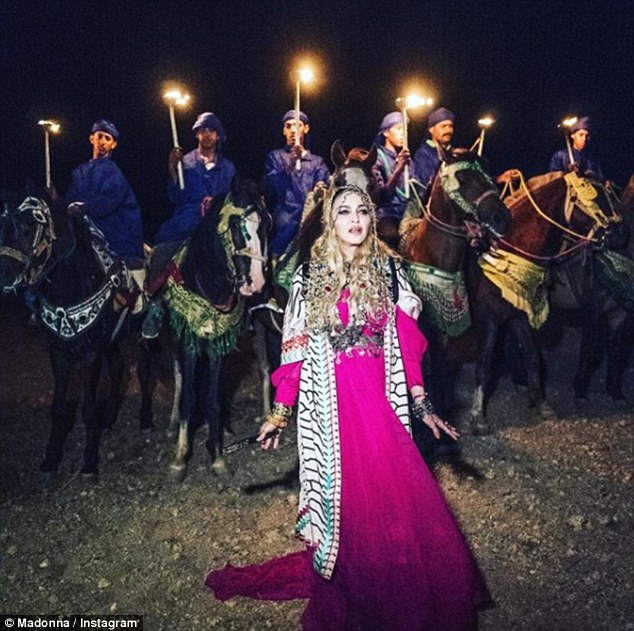 Wow! On Thursday, The Queen of Pop took to Instagram to share photographs of herself enjoying the festivities 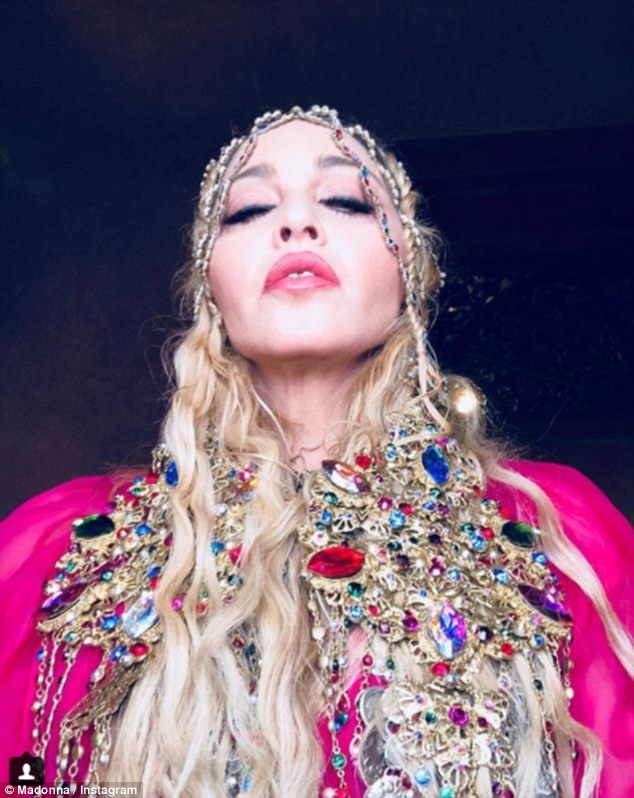 Incredible: She accessorised the maxi-dress with a stunning jewelled headpiece and a striking oversized multi-row coin necklace embellished with brightly coloured gems

Madonna also shared a selfie with her ‘ride or die’, Debi Mazer, 54, writing alongside: ‘If looks could kill……….with my ride or die! @debimazar #Marrakesh #morocco #magic #birthday (sic).

Goodfellas Actress Debi also posted a number of pictures of them together and wrote: ‘Happy Birthday Chica! @Madonna. Love you LONG time.. To many more happy times together! Celebrations in Marrakech with friends! (sic).’

Madonna – who turned 60 on Thursday – has flown her closest friends and family to Morocco to join her for the festivities. 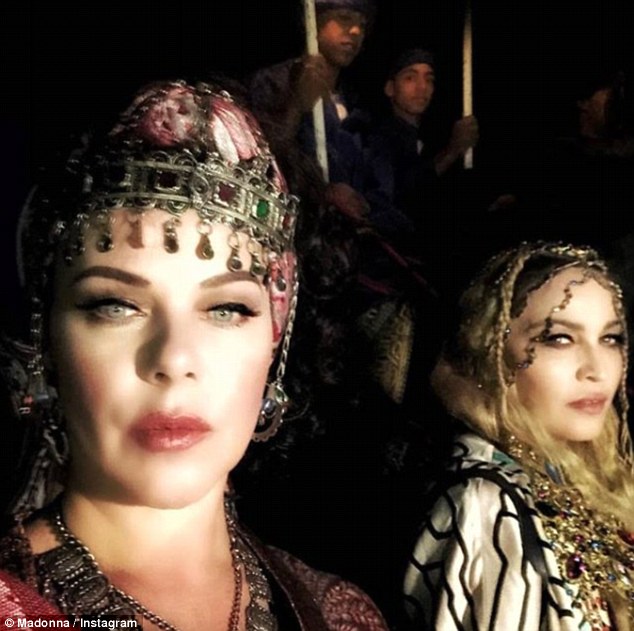 The Papa Don’t Preach songstress has gone the extra mile for her loved ones, putting them up in the luxury hotel Riad el Fenn in Marrakesh, which is owned by Richard Branson’s sister Vanessa.

According to The Sun, Madonna splashed out thousands to decorate the palace for her big day.

Madonna’s youngest four children were adopted from Malawi and for her birthday, the Queen of Pop has set up a fundraiser for her foundation Raising Malawi. 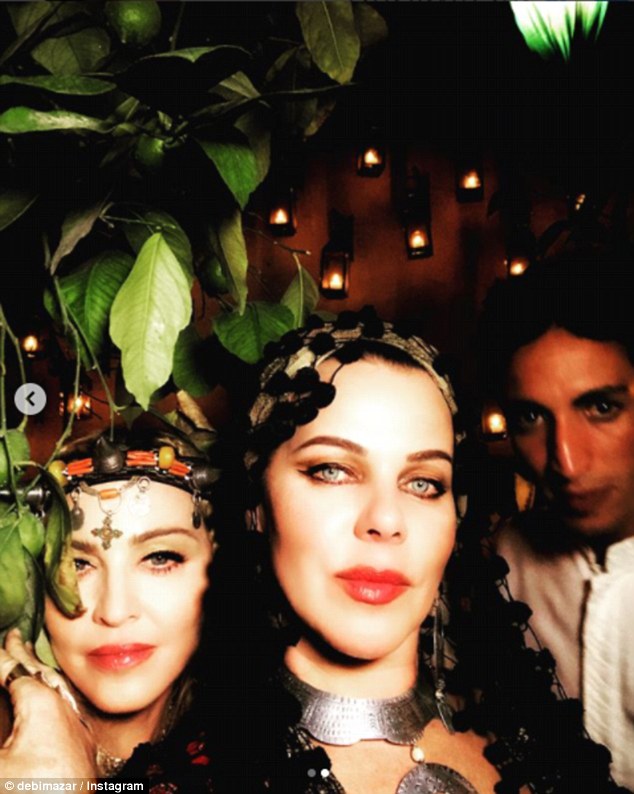 She wrote in a post on her Facebook page: ‘I have an unwavering commitment to providing vulnerable children with a loving home.

‘For my birthday, I can think of no better gift than connecting my global family with this beautiful country and the children who need our help most. Every dollar raised will go directly to meals, schools, uniforms and healthcare.

‘I want to come together with my friends, fans and supporters to change the lives of Malawian children and let them know they are nurtured, protected and loved.

‘Through their generous commitment to this organization, Ripple will match each dollar donated to this campaign. -Madonna (sic).’ 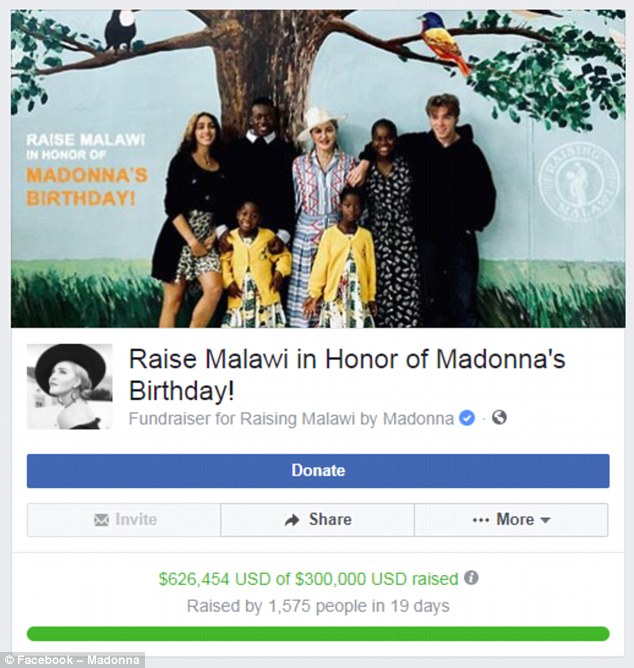 Charity: Madonna’s youngest four children were adopted from Malawi and for her birthday, the Queen of Pop has set up a fundraiser for her foundation Raising Malawi 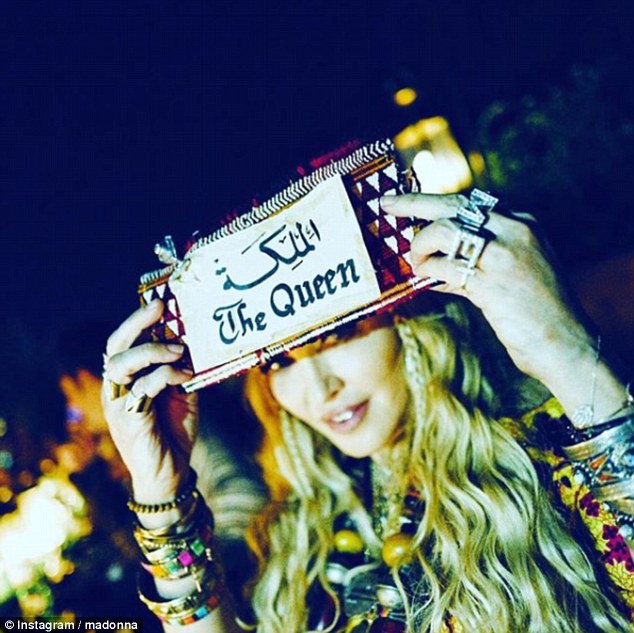 The Queen: Madonna used her 60th birthday on Thursday as an opportunity to remind her followers of her status, sharing a fun snap as she held up a sign bearing the words ‘The Queen’

The fundraising campaign has already more than doubled the USD $300,000 target amount.

Earlier in the day on Thursday, Madonna used her 60th birthday an opportunity to remind her followers of her supreme status in the music industry, sharing a fun Instagram snap as she held up a sign bearing the words ‘The Queen.’

Grinning towards the camera, the pop icon looked happy and relaxed as she appeared to be enjoying a lavish dinner with her family and close friends in Marrakech, Morocco. 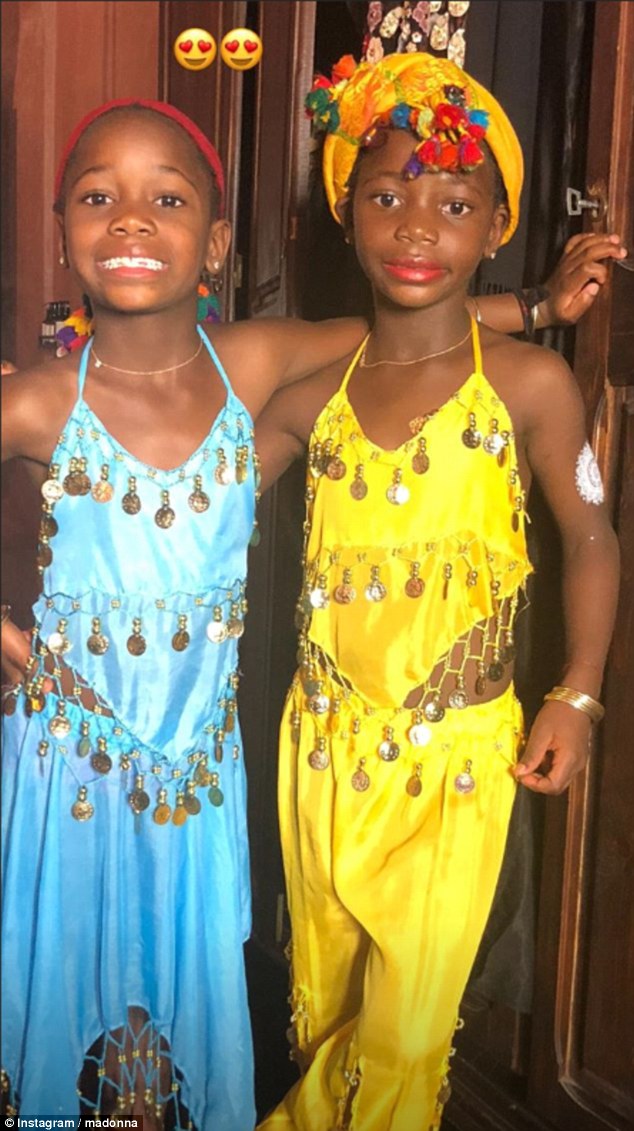 Family time: The Papa Don’t Preach singer was in Marrakech, Morocco celebrating her 60th birthday with some of her children; including twins Estere and Stelle, five, in traditional dress Beautiful: Madonna sported long blonde locks in the snap, styled into tight waves with thin plaits adding a boho feel to her appearance

The Papa Don’t Preach singer was in Marrakesh, Morocco, beginning her 60th birthday celebrations with some of her children, and took to her Instagram story to share further photographs giving an insight into her time in Morocco with her family. All hail: Also visible was a bejewelled orange and silver headband-come-crown on her head, which a day earlier, Madonna had unveiled in a series of sultry selfies

Madonna also uploaded a magnificent photograph of herself with a gold tray balancing a chandelier, candles and intricate Moroccan teacups being rested on her head.

Also visible was a bejewelled orange and silver headband-come-crown on her head, which a day earlier, Madonna had unveiled in a series of sultry selfies.

In one snap, she gave a sexy pose to the camera and captioned the picture: ‘Almost Birthday Selfie- Celebrating Berber. Culture! #birthday #nomad #magic #Marakesh.’

While she was away with her family, tributes began to pour in on Twitter, with many celebrities wishing their ‘icon’ Madonna a lovely day.

Adorable: The pop icon took to her Instagram story to share further photographs giving an insight into her time in Morocco with her family (pictured Estere and Stelle with a friend)

Kylie Minogue kicked things off by writing: ‘Happy birthday to Lady @Madonna!!! I’m 14 years old, dancing and singing in my bedroom and she was just WOW!!! What a force and an inspiration. Enjoy your day Madonna!!!’

David Walliams followed suit, sharing a photo of the singer with the caption: ‘Happy 60th Birthday to the woman of my dreams since I was 13 @Madonna.

‘She makes me think of Shakespeare’s description of Cleopatra- ‘Age cannot wither her, nor custom stale her infinite variety’.’

Darren Hayes of Savage Garden added: ‘I wouldn’t be who I am without @Madonna. Happy Birthday, Queen’ Iconic: While she was away with her family, tributes began to pour in on Twitter, with many celebrities wishing their ‘icon’ Madonna a lovely day

While singer Paloma Faith chimed in: ‘Happy 60th to the courageous, shape shifting, influencing bad*** that is @Madonna.

‘Thank you for being my childhood pin up and the reason why I will never made the same album twice!’

Meanwhile British star Denise Van Outen shared a fierce snap of herself dressed up as the Like A Prayer hitmaker for charity.

She wrote in the caption: ‘When I was Madonna for the day for @comicrelief Happy 60th birthday @madonna’

Lisa Riley also praised her long-time ‘hero’ on Twitter, adding: ‘Happy Birthday to my never ending #hero @Madonna. For many years I have sang every lyric of every song, she has ever made! 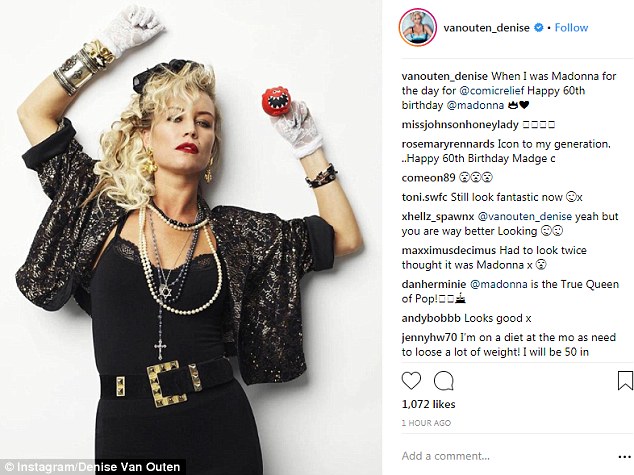 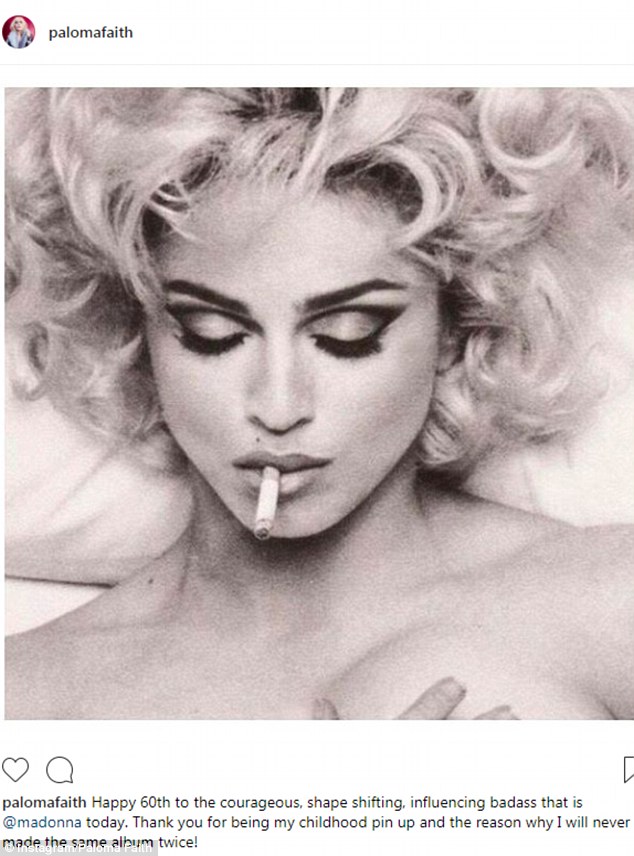 ‘As she FOREVER keeps evolving into another different chapter of her life. She keeps being what she is “Queen Of POP”’

The Like A Virgin hitmaker’s major milestone comes just days after she showered son Rocco Ritchie with love on his 18th birthday.

Madonna celebrated his big day with a picture of the teenager’s face made up entirely of photos of her own face.

She captioned the Instagram shot: ‘Into Your Eyes………My Face Remains. 18 years went by in the blink of an eye! #happybirthdaymy love.’

The mother-of-six, who turned 60 on August 16, also shared two photos of herself as a fresh-faced mother cuddling Rocco when he was a toddler.

She wrote alongside the heartwarming shots: ‘I Am To My Beloved… As My Beloved is to Me…’ 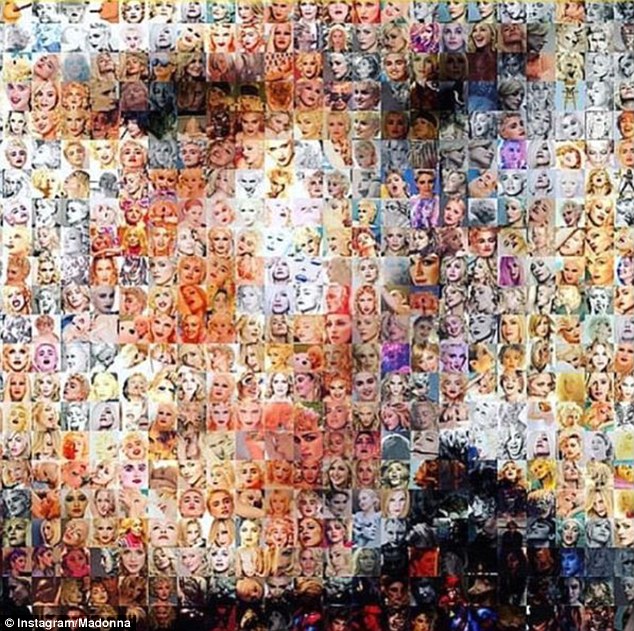 Milestone: Madonna celebrated her ‘beloved’ son Rocco Ritchie’s 18th birthday by posting a quirky snap of him made up entirely of photos of her own FACE

The Like A Prayer hitmaker shares Rocco with husband Guy Ritchie, 49, with the couple later going on to adopt their Malawian son David in 2006. They split two years later.

Rocco has been living with Guy in London since the director won a nine-month custody battle over Madonna in 2016.

Madonna relocated to Lisbon, Portugal, so that her adopted son David Banda, 12, could attend a prestigious soccer academy in the city.

She is also mother to Lourdes, 21, with Cuban dancer Carlos Leon and has adopted Mercy James, 12, and five-year-old twins Estere and Stella.

Speaking of living outside of the U.S, she said: ‘I’ve lived in other places; I lived in London for 10 years. I like to put myself in uncomfortable situations and take risks.’

Madonna confirmed earlier this year that she would be releasing her new album later in 2018. 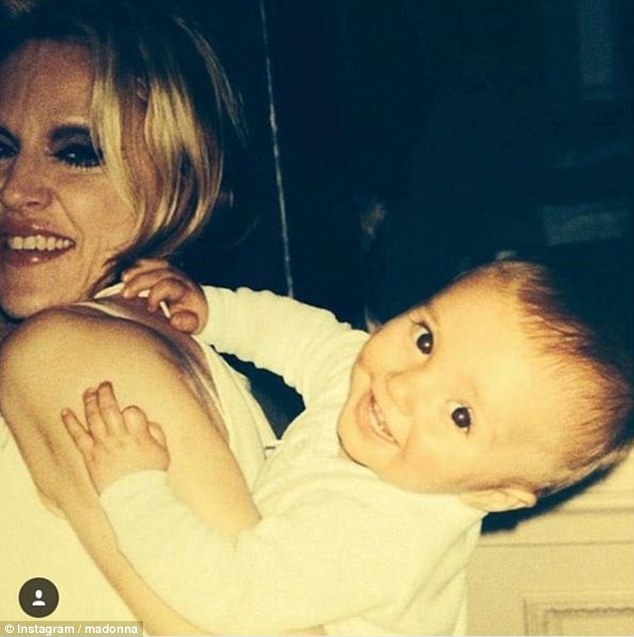 Sweet: The mother-of-six, who turns 60 on August 16, also shared two photos of herself as a fresh-faced mother cuddling Rocco when he was a toddler Sharing the love: The Like A Virgin hitmaker also posted a sweet black and white snap of Rocco while they were in Malawi over the summer