The Chase star Mark Labbett, 53, shared a lengthy thread on Twitter about his Game Of Thrones season eight theories.He began his thread of tweets, telling his 110,000 he had discussed the potential ending with his co-star Jenny Ryan, who is known as The Vixen.The star then said: “Feel free to mock :),” before sharing his predictions. Mark tweeted: “Cersei (played by Lena Headey) killed horribly by Night King (Vladimir Furdik), Jamie (Nikolaj Coster-Waldau) kills and is killed by Zombie Cersei.

“Arya (Maisie Williams) kills Night King with her super weapon before being eaten by a dragon (she must die for killing her guests the Freys).”

“Sansa (Sophie Turner) saved by hound (Rory McCann) who sacrifices himself to the flames. 3/5.”

Mark added he believes Daenerys Targaryen could end up “seriously wounded” by Brienne of Tarth (Gwendoline Christie), insisting she could become the “Queenslayer”.

The Chase star went on to say he believes Tyrion Lannister (Peter Dinklage) could be unveiled as the son of the “mad king”, who becomes the “prince of prophecy by stabbing Dany through the heart”.

He added Tyrion could go on and rule the iron throne with Sansa. 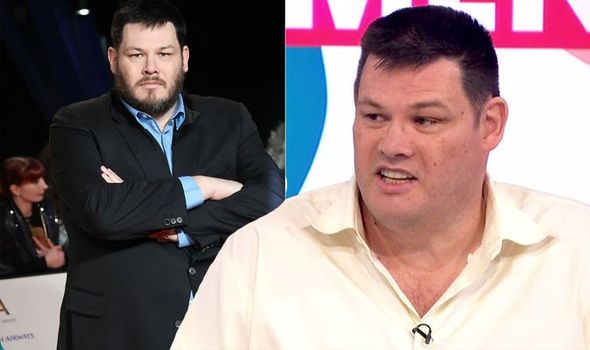 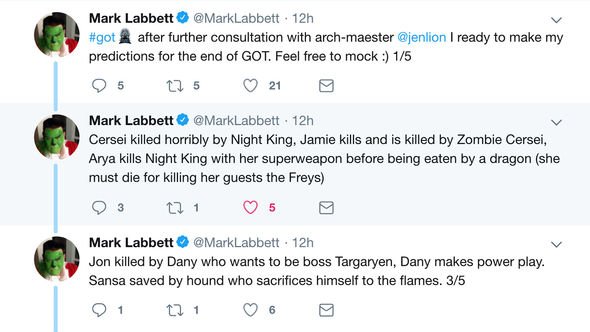 Mark finished his theory, commenting: “As a Targaryen Tyrion can control the last surviving dragon and bring peace to the realm.

“Oh and the hound wins The Battle of the Cleganes naturally 6/6 🙂 #wayout.”

Many of his fans commented on his predictions, with one writing: “That… Is a f*****g stretch mate.”

A third commented: “I’m a little lost. Haven’t got a clue what #GOT is!” 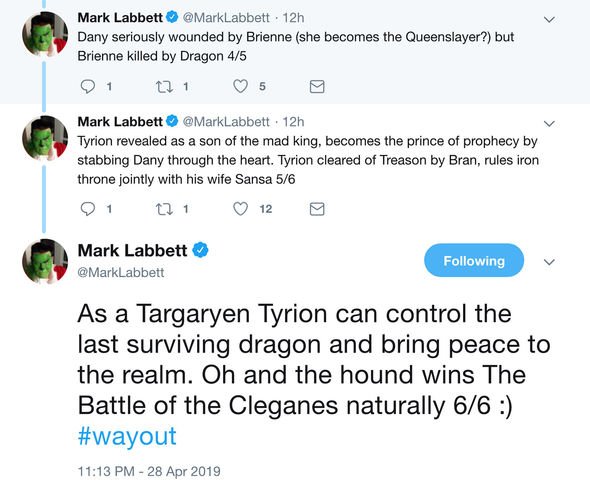 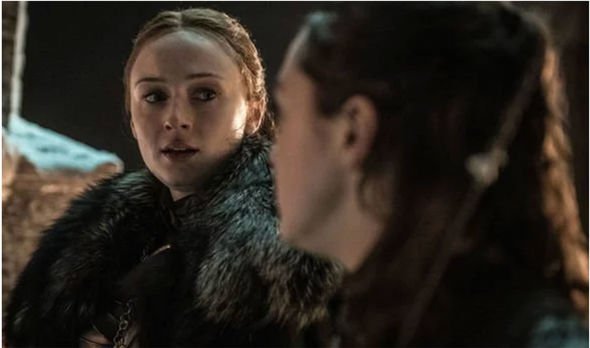 Mark’s predictions came before viewers witnessed Arya steal the Battle of Winterfell when she killed the Night King in episode three.

Maisie’s on-screen character beat the odds by attacking the Night King, although her fate on the show remains unclear.

The Chase continues tonight at 5pm on ITV.

Game of Thrones season eight continues next Sunday on HBO and Sky Atlantic on Monday at 2am.