That dastardly cur Iago is one of the nastiest villains in all drama. He schemes against his wife’s employers, sowing jealousy in military man Othello and persuading the general that Desdemona has been unfaithful to him.

Iago, Iago: it is a name to conjure courtly, slithering evil. A ‘viper’. Iago embodies the Machiavellian falsity of medieval courts, the guile still found in modern offices.

We perhaps envisage him with sharp edges, as someone sleek, furtive, inwardly a-boil with jealousy’s slower-burn cousin, the acid of envy. 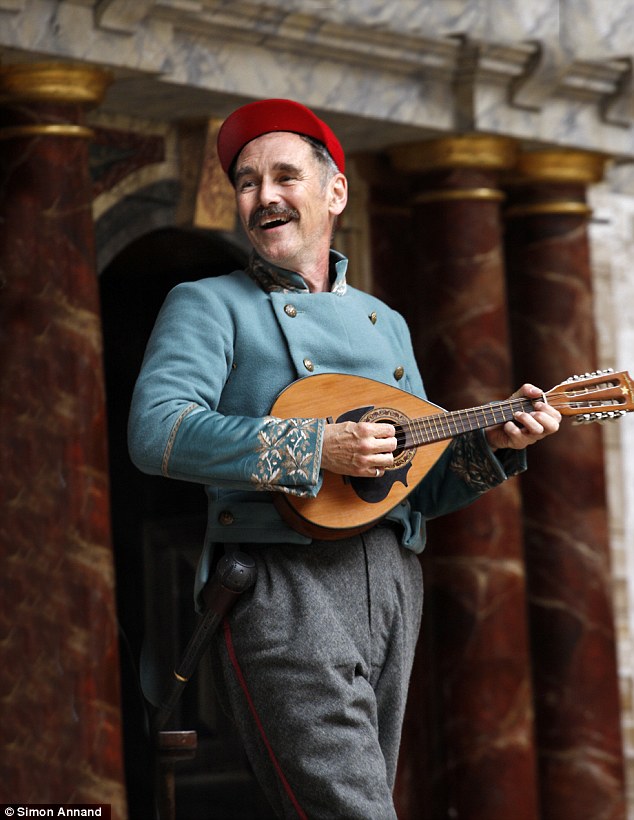 How does Sir Mark Rylance play Iago in the new ‘Othello’ at Shakespeare’s Globe? As a comedic bumbler

How does Sir Mark Rylance play Iago in the new ‘Othello’ at Shakespeare’s Globe? As a comedic bumbler. It is a well-worn Rylance riff. The moment he enters, the audience smiles. A red cap is on his head at a cheeky angle. His trousers are an inch or so short.

His voice is that Rylance mix of furry vowels and quick-tumble delivery, so that he pauses as though short of breath and moves as if to half-repeat words like a cricket roller going back over a patch of already-pressed grass. Rylance as Iago or Iago as Rylance?

The Globe is old turf for Mr Rylance. He ran the place for years and helped establish its custom of rapport between actors and the ‘groundlings’ (the audience members who stand in the pit).

It was perhaps inevitable that, even in this tautest of tragedies, he would break the fourth wall and play pit-a-pat with spectators at the front. To do so in Iago’s crucial ‘I am what I am’ speech is bold to the point of self-destructive. Once a Globe audience has been toyed with, it can become over-excited.

It starts laughing at every roll of the eye, every pause. In Act II, Cassio, unaware that Iago is a mortal threat, says ‘good night, honest Iago’ — and Mr Rylance smirks to the crowd to accentuate Cassio’s dimness. Hoots of laughter!

When Iago slyly undermines Cassio in Act III, the audience cackles away, thinking it all wildly funny. 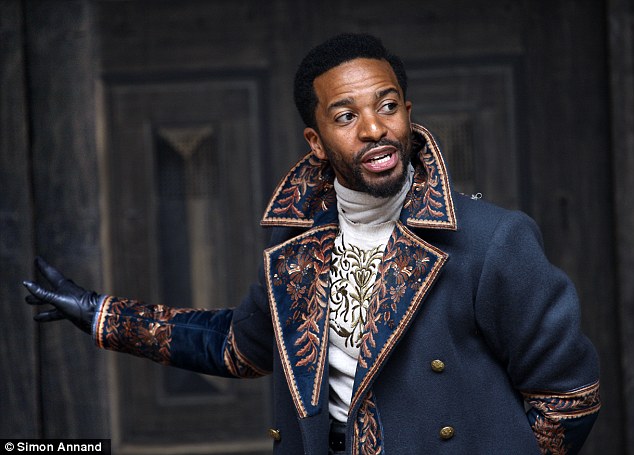 When Iago slyly undermines Cassio in Act III, the audience cackles away, thinking it all wildly funny. Pictured is André Holland as Othello

Far from being chilling, this moustachioed, flapping-trousered Iago is a Charlie Chaplin chump.

It’s different, at least. It may explain how everyone is fooled by Iago. It may force the lesson of treachery back on the audience itself.

But it robs the play of its menace and denies an already pared-back production the theatricality of palpable evil.

The show is directed by Mr Rylance’s wife, Claire van Kampen. Might a different director have been firmer and told him to rein in his trademark goofing and done more acting?

The Globe, having dispensed with the colour and amplification of its last artistic director Emma Rice, has returned to its former austere ways. 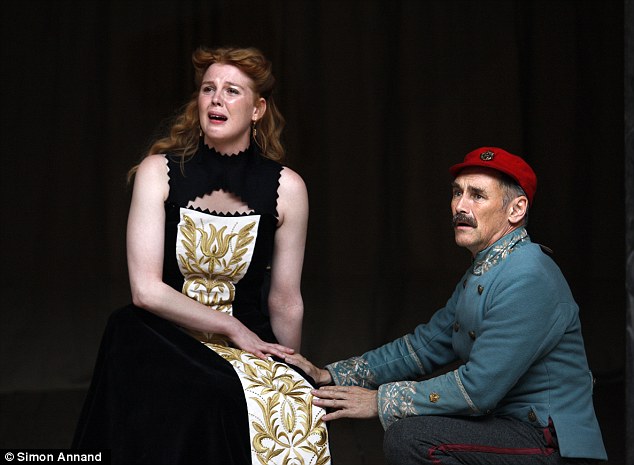 Jessica Warbeck as Desdemona and Mark Rylance as Iago in Othello, running at the Globe

There is little colour and few props. What a relief it is, if only to the eyes, when Desdemona’s four-poster bed arrives on stage. Andre Holland makes a youthful, slender Othello. He could do with speaking up a little. Jessica Warbeck’s Desdemona improves once she has discarded a hot brown overcoat.

There is a female Doge of Venice, no more stately than a hotel check-in clerk, and a female Lodovico sporting a quasi-Mohican haircut.

The stalwart William Chubb plays Brabantio, Sheila Atim has a stab at Emilia, and I enjoyed some balletic appearances by Clemmie Sveaas as the chorus.

But I missed that glowering presence of malice that a properly menacing Iago brings.

Take a ride on the money-go-round

Like financial experts and fiscal shamans worldwide, I have a very poor grasp of what drives global economics.

But don’t let that put you off this extraordinary piece of participatory theatre by maverick Belgian company Ontroerend Goed.

It encourages us to think of the world as a conglomeration of casino tables and is either a brilliant metaphor for macro-economics or total nonsense.

An audience of 70 people sit at ten tables (countries) with seven players (investors) and a croupier (the bank).

We wager what cash we are carrying (min. £5, max. £20) in return for chips designated as £1 million (you get your stake back at the end).

You start with a 1:1 return on your chips for scores on dice over three. Then it’s a 2:5 return for scores over four, and later 5:15 for scores of five or six. Money is printed, bonds sold and loans offered through the fiscal sorcery of ‘fractional reserve banking’.

Chips and bonds are traded from other tables, supervised by a shady committee (the IMF?). Mergers are encouraged and you can ‘short’ other players to win their losses.

Inevitably, the whole system crashes when bonds need to be paid and we vote to decide which table’s bonds to save to minimise our exposure.

The heat rises, music gets more disco and a gong is struck to mark the end of the session. The point is then explained by a trading floor staff member: we need to return to a system of trust to ensure some countries are not written off for making decisions that they may not have understood.

But, to be honest, I wasn’t sure if the game demonstrated the necessity of trust, or the worthlessness of it.

One thing’s for sure: every model of global economics eventually gets trashed and, as John Maynard Keynes put it, ‘in the long run we’re all dead’.

In the meantime, this is two hours of great fun with friendships developing across the board. For my £5 stake I won £53 million and became the richest person at my table (if only art reflected reality!).

Neatly carpentered tables, soft black carpets and low lighting help us to fall under the spell of filthy lucre.

It could easily be a board game to blow Monopoly out of the market. A better title? Boom And Bust.