“Achingly Beautiful Boy…” Fox, 34, captioned a black-and-white mirror selfie on Instagram on Wednesday, August 5. Both the Transformers actress and the rapper, 30, had towels wrapped around their waists as they posed side by side. “My heart is yours 🔪♥️🔪.”

One week earlier, Kelly (real name Colson Baker) shared his first official photo with the New Girl alum after the duo first sparked dating rumors in May. “waited for eternity to find you again … 🔪💫❤️🔪,” he wrote alongside the Instagram snap. 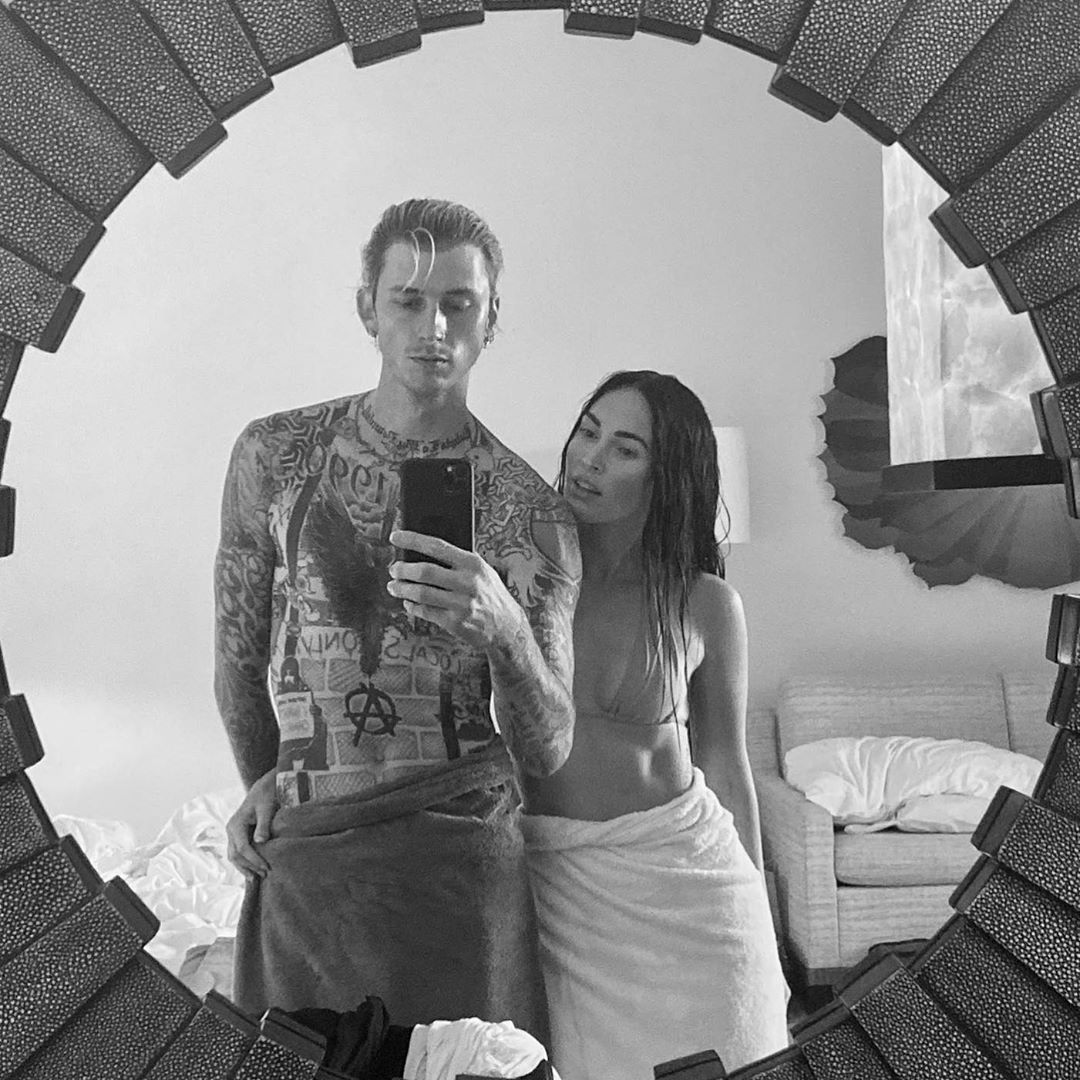 The Midnight in the Switchgrass costars were first seen together in Calabasas, California, three days before Brian Austin Green confirmed that he and Fox had gone their separate ways after nearly 10 years of marriage. The Beverly Hills, 90210 alum, 47, noted on his “…With Brian Austin Green” podcast at the time that he and the Jennifer’s Body actress began “trying to sort of be apart” at the end of 2019. The former couple share sons Noah, 7, Bodhi, 6, and Journey, 3.

Hollywood Love! Hottest Couples Who Fell in Love on Set

“She met this guy Colson on set on this film she’s working on,” Green said on his podcast. “I’ve never met him — goes by Machine Gun Kelly — I’ve never met him but you know, Megan and I have talked about him and they’re friends at this point. … From what she’s expressed, he’s a really just nice, genuine guy. And I trust her judgment. She’s always had really good judgment.”

Us Weekly exclusively confirmed the next month that Fox and the “Bad Things” rapper had defined their relationship. “Megan and MGK have gotten more serious and are officially dating and referring to one another as boyfriend and girlfriend,” a source said in June. “They’re enjoying spending more and more time together and have a strong connection.”

As their romance continued to heat up, the costars gave their first joint interview as a couple on a July episode of the “Give Them Lala … With Randall” podcast with Lala Kent and Randall Emmett, the director of the film that sparked their connection.

“The second that I was in a room with him … I knew right away that he was what I call a twin flame,” Fox said of the Big Time Adolescence actor. “Instead of a soul mate, a twin flame is actually where a soul has ascended into a high enough level that it can be split into two different bodies at the same time. So we’re actually two halves of the same soul, I think. And I said that to him almost immediately because I felt it right away.”

Everything Brian Austin Green Said About MGK, His Future With Megan and More

Emmett, 49, gave the pair props for keeping their romance under wraps while on set. The director previously told Us that Fox and Kelly had a totally “professional relationship” while filming the thriller.

“You two are the best actors in the world,” Emmett teased on the podcast. “I knew there was a chemistry but I didn’t know anything on a personal level. When I was watching you guys in the frame … as a director, I just thought I was a genius. … The chemistry that was going on was very magical.”