It may officially be cuffing season, but Megan Thee Stallion says she is very much single at the moment!

The Realer rapper took to Twitter on Wednesday and cleared the air about her relationship status after rumors began circulating she’s dating Tristan Thompson.

Before we go any further, we’ll tell you the 24-year-old has completely DENIED any involvement with Tristan.

The idea these two were an item really got it legs after reports surfaced online this week which claimed the 28-year-old NBA player slid into to Megan’s DMs to invite her to the Cleveland Cavaliers’ game against the New York Knicks at Madison Square Garden on Monday with pair supposedly enjoying a dinner date afterwards, too.

Well, our #HotGirl QUICKLY shut that noise down after a fan brought what’s been said about the pair to her attention. She tweeted:

“Lol they literally made up a whole LIE I was at knicks game with my manager and my friends Ej.”

According to the Houston native, she was just trying to enjoy the game like everyone else!

Unfortunately for her, the speculation only got worse from there…

Just before tip-off, a Cavaliers sports writer shared the news Tristan wasn’t even playing that night and Larry Nance Jr. would be starting in his place. One Twitter user decided to tag Megan in the message and wrote, “must’ve wore that boy out!” insinuating, well, you know.

That’s when the Big Ole Freak artist unleashed her wrath and clapped back, writing:

“What In the f-ck are you talking about. I wish y’all would stop making sh-t up I don’t even know that n***a”

In a follow-up tweet, Jordyn Woods‘ new BFF attempted to put a period on the discussion and said:

“If I ain’t claiming him he ain’t mine …SIMPLE”

Well, alright then — you heard the woman! In case we have any more questions about who Megan’s hooking up with, simply see (above).

Is there someone else in the picture, though?

As it turns out, Thompson wasn’t the only high-profile celeb to be linked to the Tina Snow performer. Eagle-eyed fans have also linked her to R&B singer Trey Songz after she was spotted with him on Halloween this year AND at his (early) birthday party in NYC on Wednesday night.

Interestingly enough, the singer whose real name is Tremaine Aldon Neverson was ALSO linked to KoKo at one point, too.

If the rumors were true, this would spell out a VERY messy situation for Megan. But again, she’s apparently still flying solo!

All of this piping-hot tea comes less than a week after E! News sources shared Tristan will reportedly stop at nothing to get the KUWTK star back in his arms.

Reactions, Perezcious readers?? Do YOU think there’s any truth to these tall tales? Sound OFF in the comments section (below)! 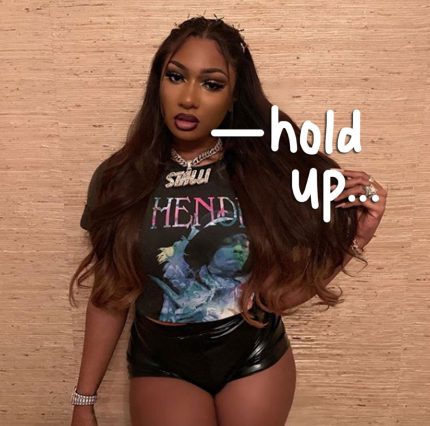