Man, I don’t think I could ever be a royal. There are just so many RULES. And while Meghan Markle, Duchess of Sussex, has taken most of them in stride, she’s currently making headlines for a recent slip-up. Yup, Meghan Markle broke a royal rule, you guys. It’s one that has to do with the way she crossed her legs, and the world is totally freaking out about it — because, duh.

OK, so here’s what happened. The Duchess of Sussex mistakenly crossed her legs at the Young Leader Awards at Buckingham Palace on June 26. Scandalous, I know! TBH, I totally think it was an accident, because she recovered pretty quickly.

See, there’s this thing called the "Duchess slant." Don’t worry, I didn’t know what it was, either. But it refers to the way all the royal ladies (all the royal ladies!) are supposed to arrange their legs when they sit down: with their ankles together and a slight slant of their legs to one side. You can cross your ankles if it’s more comfortable for you. Well, Meghan didn’t do it. Instead, when she took a seat next to Prince Harry and The Queen, she crossed her legs at the knees. She quickly realized her faux pas and adjusted her posture to make it a little less noticeable, but not before a People photographer started snapping pics. You can watch the whole thing go down here:

Pretty smooth, right? Although… aren’t her legs still crossed? This looks like more of a cross-and-slant than a full-on slant to me. Is that a thing? And did the woman on her right clue her in? There does seem to be a bit of whispering before Meghan rearranges herself, so who knows.

Apparently, Meghan’s legs were supposed to look more like this — crossed at the ankle like they were during her visit to Cheshire, England with the Queen. 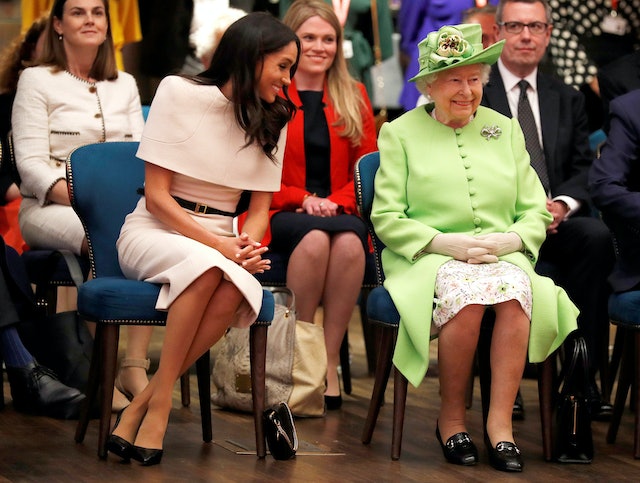 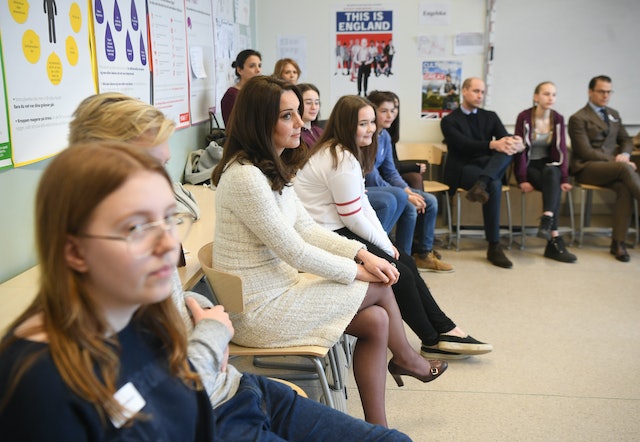 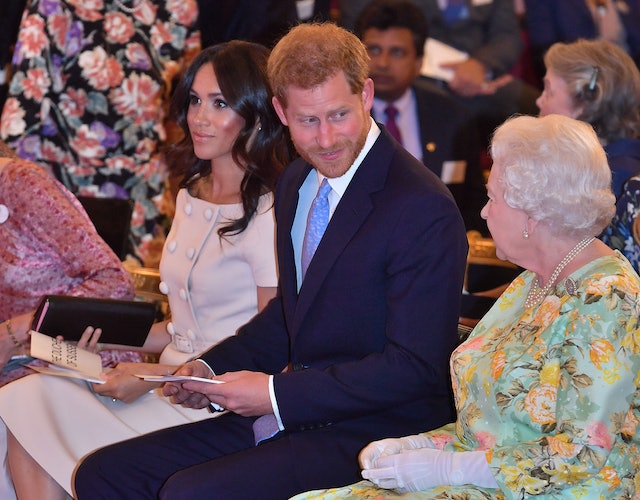 Now, let’s focus on the Young Leaders event she was attending, because that’s what’s really important here, right? Here’s the deal: The Queen started Youth Leaders back in 2013 in order to honor youth who have given back to their communities in the form of mental health advocacy, advocating against violence against women, and other life-saving acts of heroism. And she recently decided to let Meghan and Harry take over the program.

Prince Harry told Express he was "hugely optimistic" about the program’s future, and for the couple to set an example for future Commonwealth generations.

"I have really enjoyed meeting so many of them over the past four years and their passion and understanding always leaves me hugely optimistic about the future," he said. "I have seen time and time again that today’s generation understands something very important: that to tackle a big issue, you need to focus on the root causes of the challenge and not its symptoms. The Queen’s Young Leaders are having an incredible impact in their respective countries because they have adopted this mindset."

For the record, I think it’s amazing that Harry and Meghan are taking on this role, so can we please just give the Duchess a break now instead of being so petty about every little weird wrong move she makes? Can you even imagine how intense it’s got to be to adjust to all these new royal protocols? I know I would definitely mess things up — and way more than Meghan has! So instead of focusing on whether or not she crossed her legs, how about we focus on her incredible commitment to these youth leaders?