The ongoing drama between Malik Beasley, his estranged wife, Montana Yao, and Larsa Pippen continues. On Monday, the NBA pro penned a public apology to Yao, on Instagram, to try and make amends.

Beasley shared a throwback photo of himself and Yao holding their then-newborn son, Makai — who is now two years old — and a lengthy message apologizing for his fling with Pippen late last year.

“I wana say sorry for putting you in the situation you were put in the last few months.. my head wasn’t were it was supposed to be.. I was looking for more when it was right here that whole time,” Beasley wrote. “I’m telling the world and you that there’s no body like you for me.. for the record I was the one who ended my last relationship off the fact that there is no one like you.”

Beasley said he wasn’t responsible for arranging to have his photo taken with Pippen as they walked hand-in-hand at a mall in Miami in November, which is when they were first romantically linked. Yao filed for divorce shortly thereafter. In late December, additional photos emerged showing Pippen and Beasley packing on PDA at his 24th birthday party on Nov. 24.

“I wanted to do my own ish cuz I just left u guys and I def ain’t the type to set up pictures at the mall n ish .. as that’s some childish ish and I’m trying to grow individually and grow a family .. a real family,” Beasley wrote.

Beasley concluded that he’s “looking for forgiveness,” and added, “At the end of the day I’m a lover boy and I miss holding y’all and loving y’all.. I love you mu shi .. I love you kai Kai.”

Yao later addressed her estranged husband’s apology in her Instagram story, and wrote that she and her son “appreciate Malik’s apology.”

“It’s hard to own up to bad decisions and apologize especially publicly,” she shared. “My main priority has been and will forever be my son so I’m glad if/when he looks back on all of this one day he can see his dad publicly apologized to us for publicly hurting us.”

Yao called it a “step forward in healing” and that she hopes that her family can “all move forward away from the anger and hurt to be able to raise [Makai] with love, respect and happiness on both sides.” 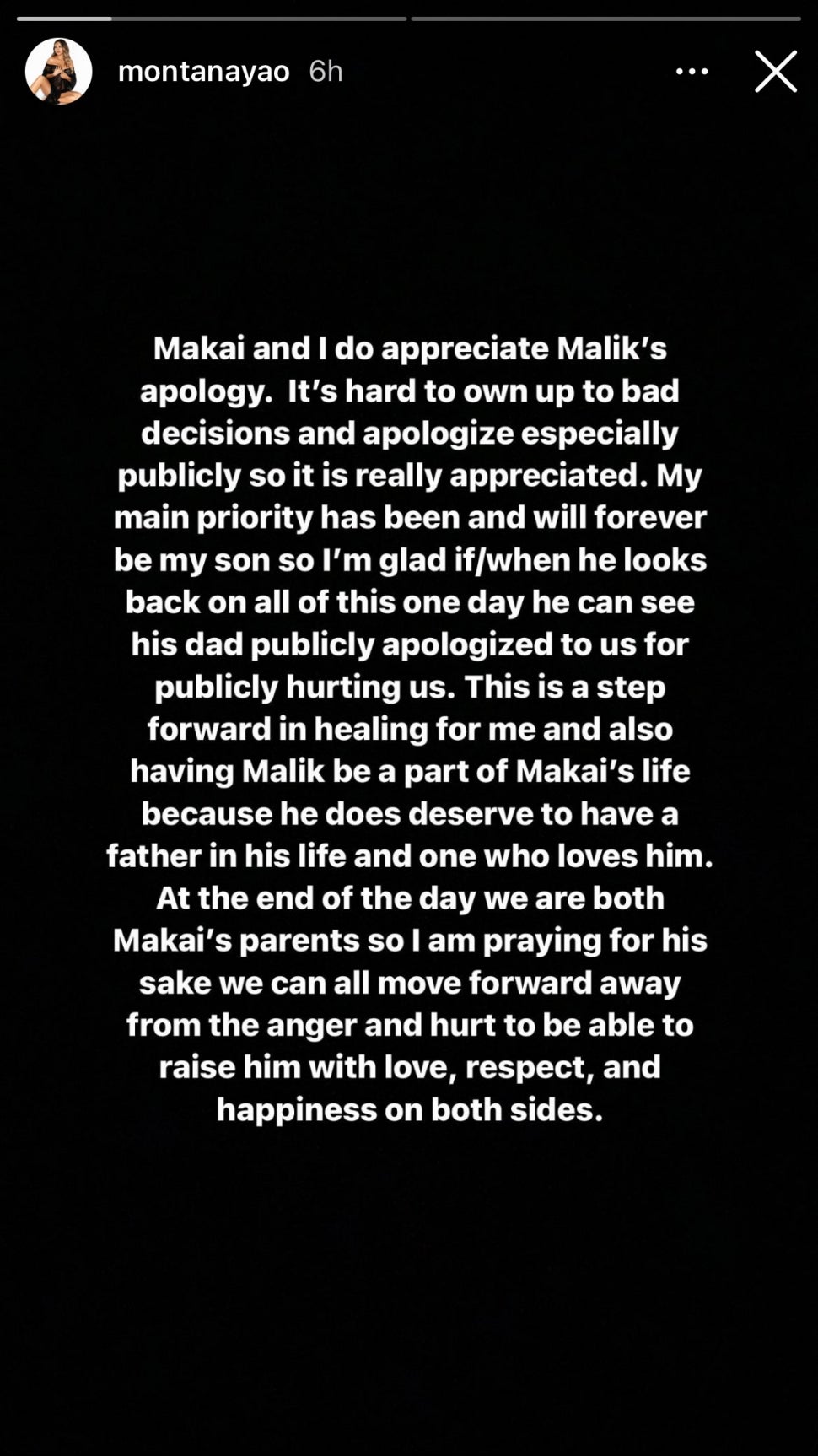 In a second post, directed specifically at Pippen, Yao unloaded with some strong words, slamming her for the things she’s said on social media about Yao, and Pippen’s claims that Beasley and Yao had split before she ever met him.

“Now you got me hot and I’m not holding back no more,” Yao wrote, in part. “I been already told you to shut your trap because you embarrassed yourself enough already. Both of you were wrong as hell but YOU ma’am had the nerve to talk all that s**t to me as if I was wrong?”

“We as women don’t claim you,” Yao continued. “You wouldn’t know girl code if it slapped you in the face you just a old desperate thirsty a** ran thru blow up doll.”

Yao went on to claim that Pippen called paparazzi ahead of time to snap pictures of her when she’s on dates, and slammed her as a mother as well.

“I’ll really be damned to EVER embarass my children like that SHEEESH. Like GOOO SPEND TIME WITH YO KIDS!” she wrote.

Yao also alleged that Pippen tried to “trap” Beasley by having him go with her to fertility clinics, and wrote, “Are you crazy? You barely even spend some time with the kids you already have and you want more?” 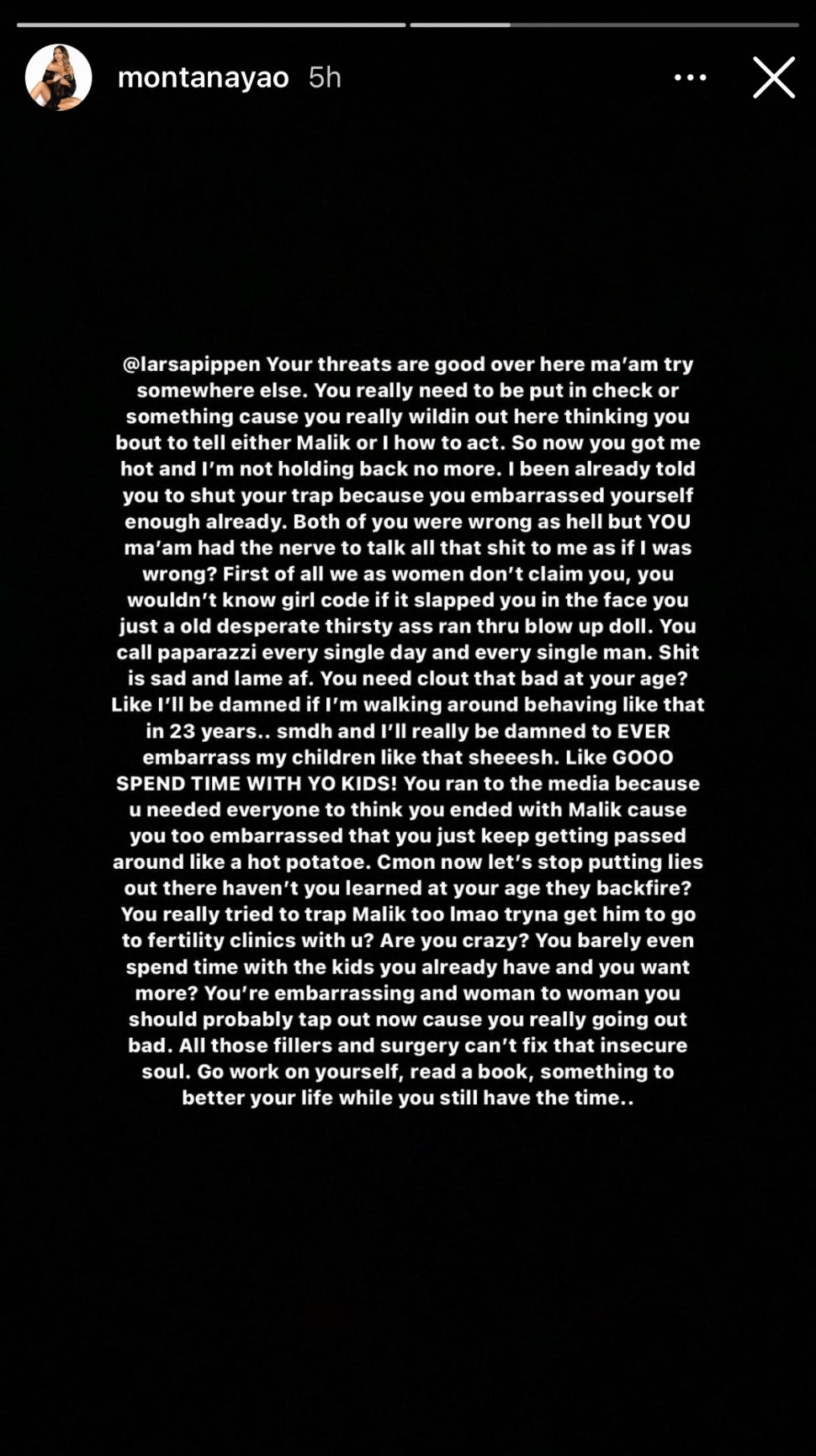 Shortly thereafter, Pippen weighed in with her own message on her Instagram story, in which she dug into Beasley and attacked his character.

“Here’s the truth about MALIK: 1. When I thought about him and how he treated your child he’s not the type of man I want around mine,” she wrote. “Any man who would deny his child and then leave the mother penniless is not a real man.”

She then claimed that Beasley “cried entirely too much,” and said that “he’s cheap, but then again you never saw any alimony so you already know that.” 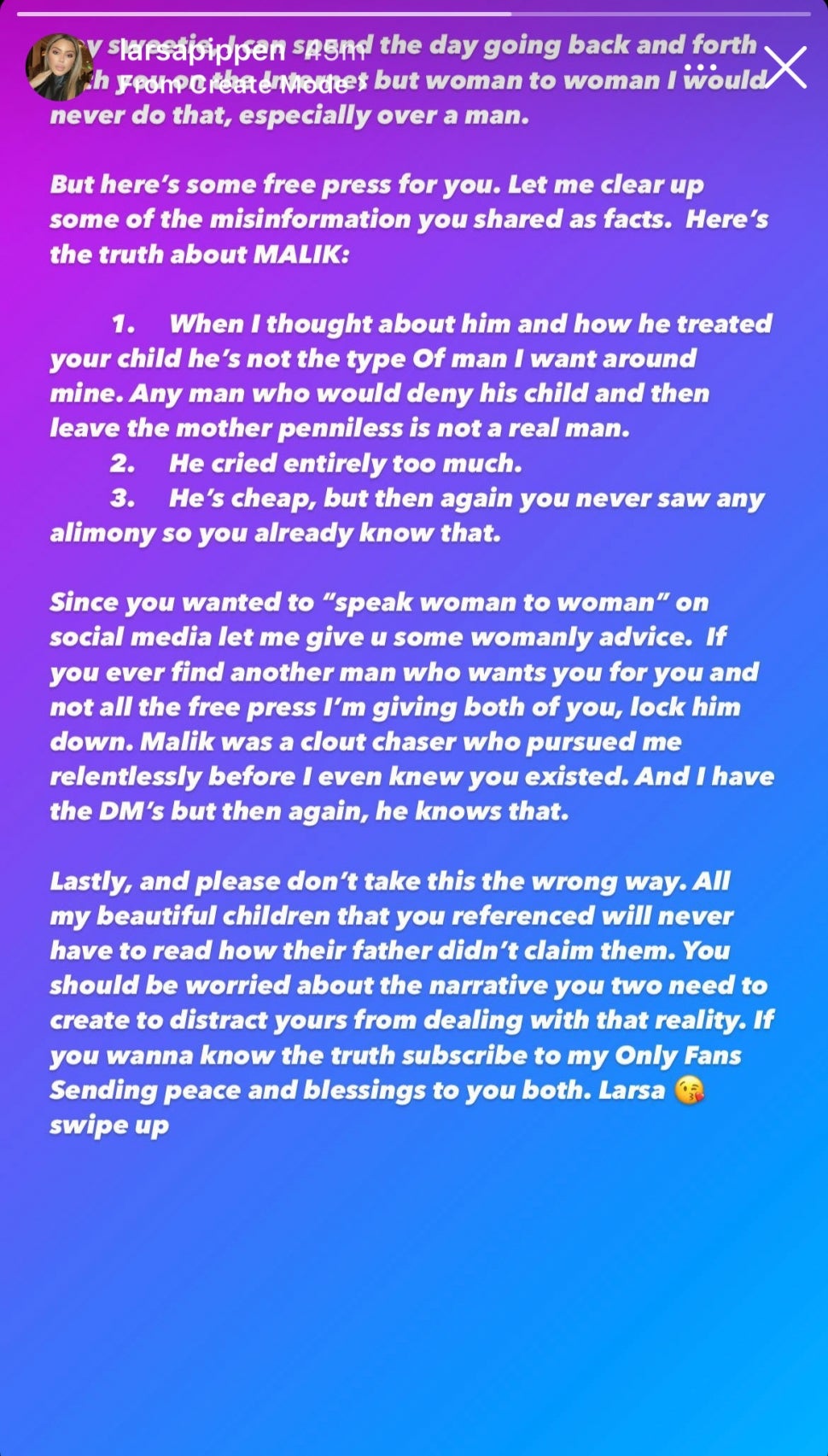 She also shared some “womanly advice” with Yao, writing, “If you ever find another man who wants you for you and not all the free press I’m giving both of you, lock him down. Malik was a clout chaser who pursued me relentlessly before I even knew you existed. And I have all the DM’s but then again, he knows that.”

“All my beautiful children that you referenced will never have to read how their father didn’t claim them,” she concluded. “You should be worried about the narrative you two need to create to distract yours from dealing with that reality.”

For more on Pippen’s public and dramatic life, see the video below.