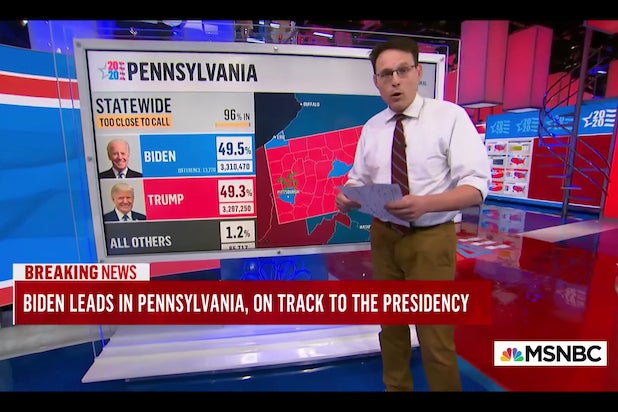 Election coverage from Nov. 2 to Nov. 8 has handed a major ratings win to MSNBC, which had the highest-rated week in its 25-year history, according to Nielsen Media Research ratings data.

Total viewers averaged 2.9 million, according to Nielsen. In the advertiser-coveted age demographic of viewers between 25 and 54, MSNBC averaged 736,000 viewers. The network says that’s its highest-rated week since the week of March 17, 2003, the week the Iraq War started.

On Saturday, MSNBC’s coverage of speeches by President-elect Joe Biden and Vice President-elect Kamala Harris outperformed ratings juggernaut Fox News. The Democratic election winners drew a record-breaking 9 million average total viewers. In the key 25-to-54 demo, those speeches brought in an average of 2.5 million. The speeches were the highest-rated program in MSNBC’s history.

MSNBC’s special coverage on Saturday, when Biden and Harris were officially declared the winners by all the major news outlets, also topped Fox News every hour from 8 a.m. ET to 3 a.m. ET in both total average viewers and viewers in that key age demographic. This win included a special edition of MSNBC’s morning show “Morning Joe,” which ran from 8 a.m. ET to 1 p.m. ET.