Brace yourselves, because this is big news. Ariana Grande officially announced she’s coming out with a new album and fans are beside themselves. It’s called Sweetener, and you can tell Grande has put her whole heart and soul into what is sure to be a new masterpiece. In a new interview with Jimmy Fallon, Grande talks about what the title and songs mean to her, and it’s so, well, sweet. The meaning of Sweetener is deep for Ariana Grande and her fans, and I am here for it.

Grande popped by The Tonight Show Starring Jimmy Fallon to chat about her new music and couldn’t stop spilling details. In a matter of minutes, she revealed she’s making a new album, the name of said album, some of the track titles, and when fans can anticipate Sweetener‘s drop date. She started off by revealing her album is coming this summer and quickly followed that up with the album title. Obviously, fans went into a frenzy. Fallon exclaimed, "You’re dropping all the things everyone wants to hear!" Grande replied, "Yeah! I’ve been away too long! I have so much more, too. I want to say everything."

When asked about the meaning behind the album title, Grande was ready to go with her response. She explained, "It’s kind of about bringing light to a situation or to someone’s life or somebody else who brings light to your life. Sweetening the situation."

You can watch her sweet reveal at the :20 mark.

Of course, fans quickly drew the connection to the tragic event that occurred at Ariana Grande’s Manchester concert back in May of 2017 when a suicide bomber attacked the show. The attack resulted in 22 deaths and many more injuries. 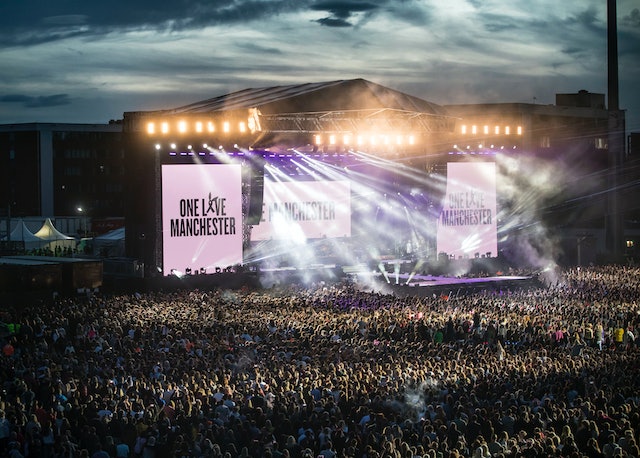 Despite the trying year she’s surely had since the attack, Grande was excited and proud to talk about her new music.

She went on to list a few of the track titles, including songs called "God Is A Woman," "R.E.M," and "The Light Is Coming." At the end of April, Grande teased some of "R.E.M’s" lyrics on Twitter, causing quite the commotion for her social media followers. Based on her posts, the lyrics go something like this:

Grande confessed the tweets were a little bit of word-vomit on her part. She told Fallon,

She also revealed she will be doing something "big" on the 20th of each month leading up to her album release, which she let slip is basically three 20ths from now.

Grande explained, "Since I’m not announcing the album date yet — you’ll have it in like two seconds — I’m going to be doing something special on every 20th… There’s only like three 20s until the big thing, uh, I just told you when it is…"

If you’re doing the math, it looks like fans can expect Sweetener to drop in July or August. Until then, fans can catch her on May 20 performing at the Billboard Music Awards.

SO. MUCH. ARIANA. GRANDE. INFORMATION.