If anyone needs ‘motivation’ to do some sit-ups, look no further than Nick Cannon. The ‘Masked Singer’ host ditched his shirt to get some reps in, and Nick looked so fit, it’s hard to believe that he’s 40-years-old!

“#MotivationMonday There’s no limits, only levels [muscle arm] #ncredible,” Nick Cannon captioned the second of two workout videos he uploaded to his Instagram on Nov. 16. In the clips, a shirtless 40-year-old Nick gets his reps in, working up a sweat with a gorgeous city skyline as his backdrop. While wearing nothing but a pair of orange track pants, some trainers, and a matching orange hat, Nick does pull-ups, pushups, bicep curls, and more intense exercises. Nick looks ripped, but after seeing what his workout routine is like, how could he not be?

Both videos showed how much work Nick puts in to look so shredded. His workout clearly impressed some of his fitness-minded fans. “U make my workouts look like I’m skippin,” commented Tamar Braxton. “I can do that with no hands,” joked Coi Leray. “It’s the strong back fa me,” added another fan. “Health is wealth, honey [prayer hands] looking good.” “What in the super-hero workout is THIS?!?! ~grabs snacks.”

The Wild ‘N Out creator turned 40 on Oct. 8, but you wouldn’t know that judging by the shirtless pic Nick uploaded nearly a month later. “While y’all counting…I’ll just be over here, hanging out,” Nick captioned the IG post of him hanging, one-handed, off a gym ring. While the shirtless Nick dangled – by one hand, remember – he decided to work on his core strength by doing some crunches, it seems. The shot showed off Nick’s hard work at the gym, as well as his tattoos. It also made people marvel at this gym feat. “People don’t understand the amount of strength it actually takes to do that,” one commenter pointed out. 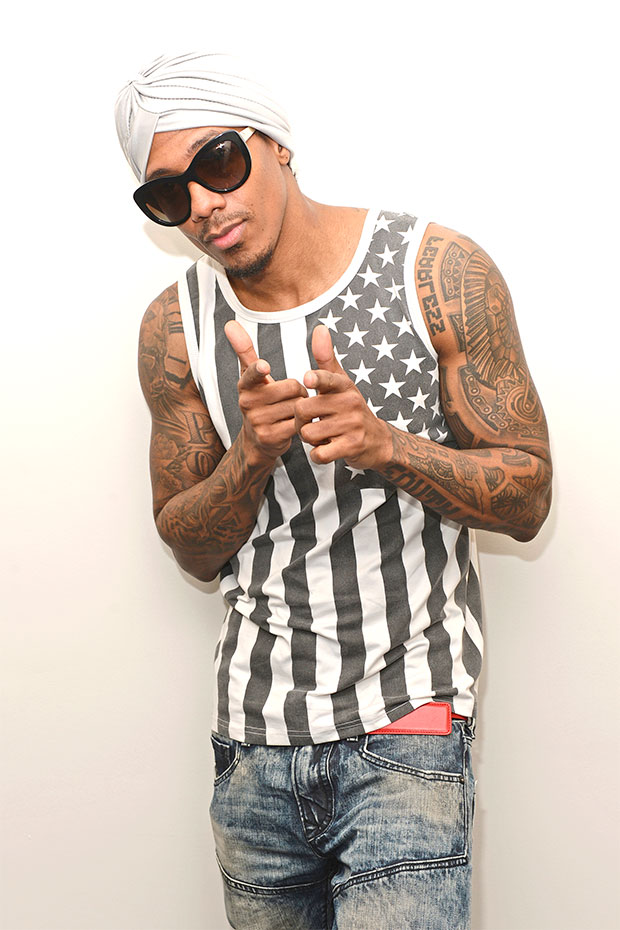 There has been a buzz about Nick, as of late, but it’s not about his fitness routine. He and a pregnant Brittany Bell were spotted holding hands while exiting Nobu in Malibu on Nov. 9. Brittany, 33, has hinted that the growing baby bump is a “Cannon ball,” though Nick hasn’t made an official statement confirming or denying that her unborn child is his.

“Nick and Brittany have a complicated relationship,” an insider told HollywoodLife EXCLUSIVELY. She and Nick share a three-year-old son named Golden and have a history of on-again/off-again dating. It seems that they’re “on-again” because the source told HL that they’re “back together and extremely happy. Nick is the only man Brittany loves, and her love for him is very unconditional. They have known each other since they were young, so the connection they have goes deep. They both call it a soul connection.”