Good morning, pls prepare to stay up all night long because Beyoncé’s dropping new music tonight. Specifically at midnight!!!! Bey announced the news across her social channels, writing “6. BREAK MY SOUL midnight ET” in her bio: 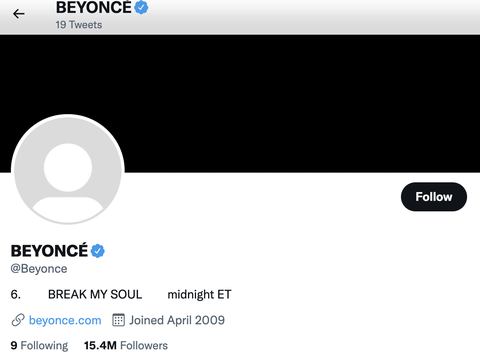 “Break My Soul” is presumably the sixth track off of Beyoncé’s upcoming album Renaissance, which drops July 29. According to Variety, the album will “feature both dance and country-leaning tracks.”

FYI, Bey actually teased the title of her new album during an August 2021 interview with Harper’s Bazaar, saying “With all the isolation and injustice over the past year, I think we are all ready to escape, travel, love, and laugh again. I feel a renaissance emerging, and I want to be part of nurturing that escape in any way possible. I’ve been in the studio for a year and a half. Sometimes it takes a year for me to personally search through thousands of sounds to find just the right kick or snare. One chorus can have up to 200 stacked harmonies. Still, there’s nothing like the amount of love, passion, and healing that I feel in the recording studio. After 31 years, it feels just as exciting as it did when I was nine years old. Yes, the music is coming!”

Welp, excuse me while I go prepare to obsessively refresh Spotify all night.