It’s been more than 40 years since the original production of supernatural horror classic “Suspiria” was released in 1977, but star Jessica Harper was eager to revisit the story for director Luca Guadagnino’s 2018 version with Dakota Johnson. Harper admitted to CBS News that the idea of a new take “always sounded a little dubious,” but something — or someone — changed her mind.

Harper, who has a cameo as Anke, the wife of Dr. Jozef Klemperer, said she “heard this rumor” that director Luca Guadagnino was involved.

“I was a fan of his movies,” Harper said. “A great fan. And so I thought it was just a fabulous idea and I thought for sure it would be incredibly interesting.” 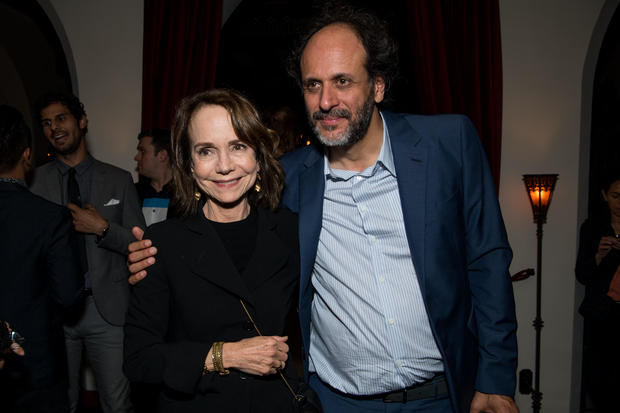 Jessica Harper and Luca Guadagnino attend the after party for the premiere of Amazon Studios’ “Suspiria” on October 24, 2018 in Hollywood.

It’s not quite right to call the new iteration of “Suspiria” as a remake. The two films share most of the same main characters and some of the same storylines, but the second “Suspiria” is nearly an hour longer and has a different plot, though both are about a prestigious dance company run by brutal witches. Harper played Suzy Bannion in the original, and Johnson took over the role for the remake as Susie Bannion.

Harper said she didn’t “feel possessive” about passing on the role. “It was just a miracle that this movie not only endured for 40 years, but was now going to have a whole new life. I thought it was great.”

Harper said was so eager to take on the role that she even stretched the truth a bit in order to snag the part of Anke, who speaks only German in the film.

“Luca called me and said, ‘Hey would you like to do a cameo?'” Harper said. “He didn’t even have to finish the sentence. I said, ‘Yes, tell me when and where,’ and he said can I do it in German? And I said, ‘No problem,’ and he apparently went to David [Kajganich, the screenwriter] and said, ‘She can speak German.'” Harper said as soon as she hung up, she called up the Berlitz language school: “I said, ‘I need to learn German like right now. Can you help me please?'” In order to prepare for her scene, Harper said she listened to an audio recording of her instructor speaking her lines over and over again.

One thing both “Suspiria” films have in common is that they are not for the faint of heart, with gory scenes featuring mutilated bodies and lots and lots of blood. But Harper’s romantic scene is a break from the carnage, and she said she’s happy that way.

“I loved doing this part,” she said. “When I first read the script, I thought, because I feel that Luca is great at a lot of things, but he’s especially good at directing intimate, emotional moments as in ‘Call Me By Your Name’ or ‘A Bigger Splash,’ so I thought, ‘I get to do one of those under his guidance,’ which was very compelling to me and I loved being a part of this emotional thread that goes through the center of a movie around which there is all this mayhem at the school and witchcraft and other things.”

“Ah, I love Lutz,” she said coyly. “He was so great to hang out with between takes and so generous when we were shooting and couldn’t have been kinder to me.” Except that Lutz is really Tilda Swinton in disguise.

Harper said of the moment she arrived on set, “There was this 82-year-old man sitting there and you know, I had to do a double take before I understood who I was talking to.” She said talking to Swinton between takes while she was in her makeup was unnerving.

“It was unbelievable because the makeup, as you know, is so incredible and to hear her voice coming out of this 80-year-old man was really strange,” she said with a laugh.

The actress said her experience on the second “Suspiria” is very different from her first.

“I was very young then; it was 40 years ago,” she said. “It was all kind of a wonderland. I got to go to Rome and live there for four months and be a part of this amazing crew and learn to speak Italian. It was a great removal from my ordinary life and htathatt was a fantastic experience, but then coming back to it now was also fantastic because it’s sort of like I’ve come full circle. It’s so miraculous to be able to come back to where you started and as another person who has much more experience and perspective on life and on an acting career.”

Harper said both films work well together, and that fans of each should watch the other to gain more insight into the story. Guadagnino is practically a scholar of the original “Suspiria” and has said that he wanted to remake the film for 33 years.

“Suspiria” is now in theaters.