Baby Daisy Dove continued her European vacation with parents Orlando Bloom and Katy Perry aboard a luxury yacht ahead of the weekend.

Little Daisy Dove is ready for the sea. Orlando Bloom and Katy Perry continued their Italian vacation festivities aboard a luxury yacht in Capri on Friday, Aug. 6. The English actor, 44, cradled his daughter, 11 months, as he and his singer-songwriter fiancée, 36, prepared to board the boat. 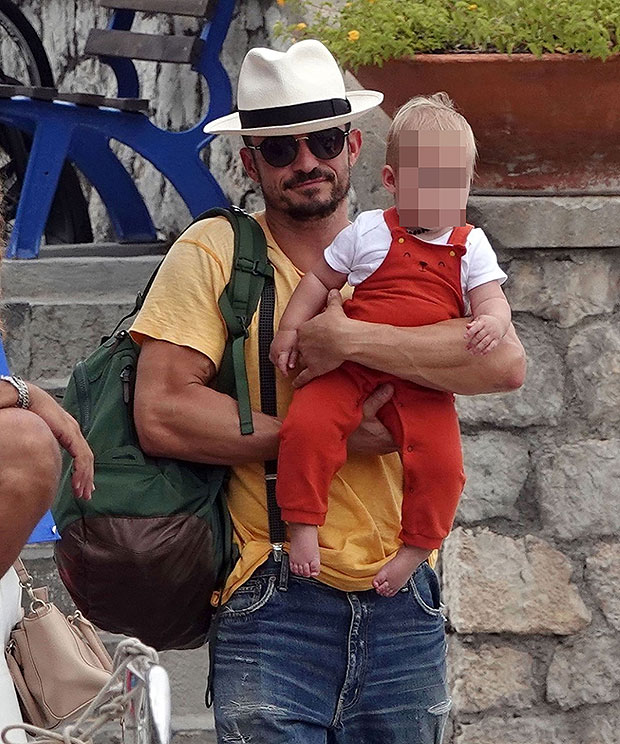 Baby Daisy, who will soon turn 1 on August 26, wore adorable reddish orange overalls over a white t-shirt for the outing, while her dad opted for a yellow t-shirt and denim jeans. He finished the look with a fedora, sunglasses, and a backpack.

Orlando and Katy have been vacationing across Europe with their daughter and Orlando’s son Flynn, 10, whom he shares with ex-wife Miranda Kerr, for about a month now. It’s been an eventful trip as the family of four have been spotted enjoying a gondola ride in Venice and shopping in neighboring Paris, France, among other activities.

Most recently, the two hit up Taverna Anema e Core Nightclub in Capri earlier this week and enjoyed dinner and a round of karaoke with friends, including British Vogue editor-in-chief Edward Enninful. With alcohol abound, silliness ensued, as Orlando was photographed dressed in an apron with chiseled abs on it and Katy in a colorful clown wig.

Katy and Orlando got engaged on Valentine’s Day 2019 following an on-again, off-again relationship that began in 2016. They welcomed Daisy, their first child together, last August. The singer reflected on her relationship with the actor and their initial split prior to the arrival of baby Daisy in August 2020, explaining that the two have “gotten through a lot of hell” to get where they are today.

“Everybody has challenges in a relationship,” she told PEOPLE. “If it’s a real relationship, it’s going to challenge you into your best self.” The singer added of the constant evolution: “It’s a never-ending evolution, so it’s not peachy keen jelly bean all the time, but it’s nice to have been able to show each other all the good, bad and everything in between, and really fight for our best selves.”

“Now, we just joke, like yeah, we still have things to work out — but champagne problems!” Katy continued. “We’ve gotten through a lot of hell.” She also offered an update about their wedding amid COVID-19: “I tried to do it this year and it poo poo-ed on me so ask me again in another year!”