Top Gear host Paddy McGuinness, 47, was joined by journalist Chris Harris, 46, and former cricketer Freddie Flintoff, 43, to discuss their upcoming series of the show on BBC One. However, the appearance didn’t go to plan as the former Take Me Out host whacked his head on the slanted ceiling behind him, which caused him to utter “b***** hell!” in pain.

Ofcom wants a word with you!

At the end of the show, the Top Gear presenter took to Twitter to share a GIF with his 519,300 followers.

The short clip perfectly encapsulated the moment he hit his head this evening while speaking to The One Show hosts Alex Jones, 43 and Ryan Clark-Neal, 32.

It showed the star of Netflix series Unbreakable Kimmy Schmidt (played by Ellie Kemper) hitting her head on a ceiling hanging.

After the alarming bang, she holds her injured head with her hands before walking away. 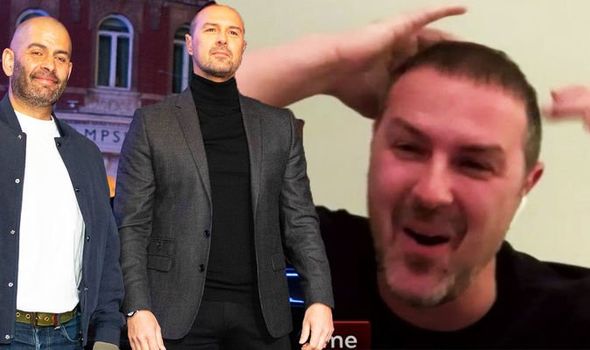 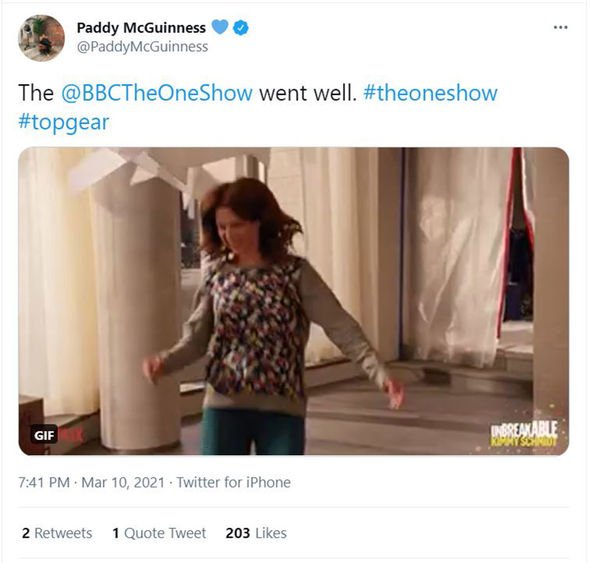 To which Paddy jibed back: “I couldn’t see with the reflection off your head!”

However, it was Chris who got the last laugh when he joked: “Ofcom wants a word with you!” 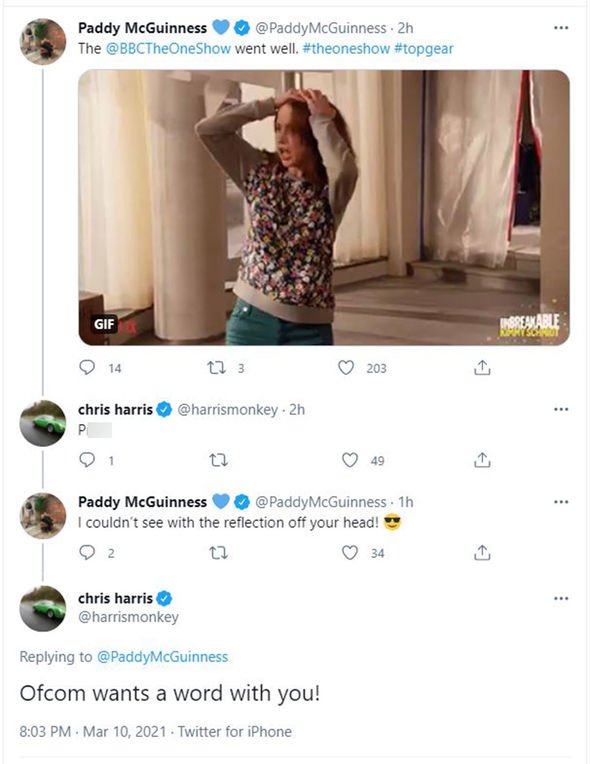 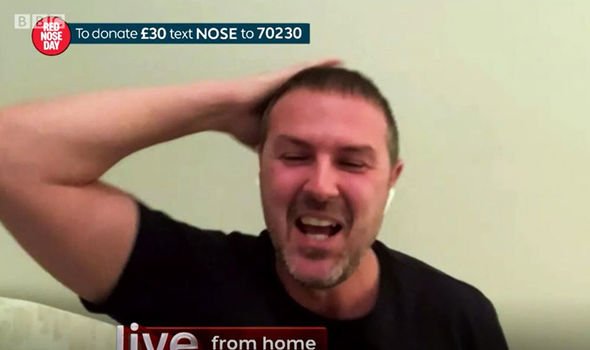 Paddy’s on-screen blunder a big reaction from The One Show viewers.

It occurred when hosts Alex and Rylan watched a clip of the upcoming motoring series where the former Take Me Out host was perched on Chris’ knee.

After showing the clip to viewers at home, Rylan was quick to ask how comfortable it was for Paddy.

Paddy replied: “Rylan, I’ve got to be honest, that was extremely uncomfortable”.

“Because it was only a small car and Chris was kind of…ow!”

Viewers then saw Paddy hit his head on a sloping wall behind him.

“Bl***y hell!” he exclaimed, as he came back into shot rubbing his head.

Rylan quickly stepped in as Alex tried to stifle her laughter, he said: “We should apologise as well if there was any language there

The host went on to joke: “This man is in charge of driving cars and he’s just knocked himself out in his own bathroom. Are you alright?”

“I’m alright, I’m alright,” Paddy replied as Rylan reminded him he was sitting under a “pitched roof”.

The Top Gear presenters also addressed the series being shorter due to the pandemic as well as the show’s switch to BBC One for the first time.