The ‘This Is Paris’ star posts a throwback ‘Holy Trinity’ picture of her driving the ‘Mean Girls’ actress and the ‘Gimme More’ singer more than a decade ago.

AceShowbiz –Paris Hilton marked the 16th anniversary of her “Holy Trinity” photo. More than a decade after she was caught driving her car on a night out with “Mean Girls” actress Lindsay Lohan and pop star Britney Spears in the passenger seats in 2006, the now 41-year-old heiress celebrated the image – which went on to become a tabloid sensation depicting what was labelled the “Holy Trinity” of late 2000s pop culture – by reposting it on Twitter on Monday, November 28.

“16 years ago this happened and the ‘Holy Trinity’ was born. #Sliving. @BritneySpears @LindsayLohan,” she captioned the post. 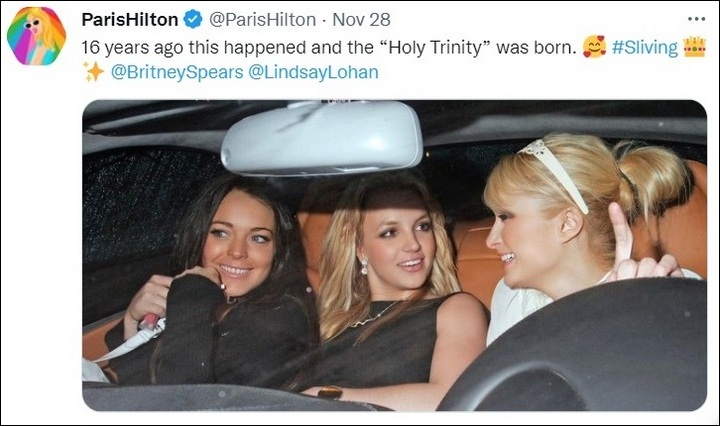 Several followers were quick to notice the post and reminisced about the impact the photograph had had on them. One fan wrote, “Changed my life,” while another said, “Love it and love the picture. I remember that.”

Last year, the “Paris in Love” discussed the viral image, explaining that it was borne out of a need to escape the paparazzi and that Lindsay had jumped into the car in an “awkward” moment after being asked by photographers if they had been in a fight.

She said, “That was a night that Britney and I went out, and we were at the Beverly Hills Hotel, at our friend’s party, and we decided to leave to go home. We were walking to the car and all of us suddenly got swarmed by tons of paparazzi.”

“Just as we got to the car, that’s when Lindsay came up. It was kind of awkward because we were having some drama. Lindsay said, ‘No, Paris would never hit me, I’ve known her since I was 15.”

“It was basically just, not admitting what she did. It was quite awkward to be asked that question, and it was just weird how that whole thing happened. All of a sudden, I look over, and she’s in my car. We weren’t getting along, but I was polite.”