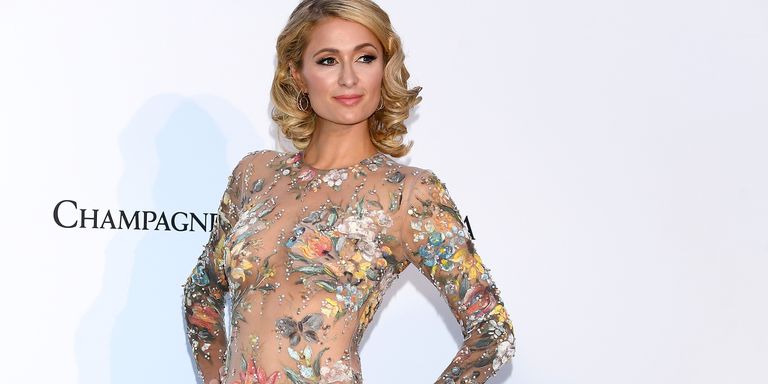 Arriving at Cannes Film Festival today, Paris Hilton was the latest to rock a naked dress on the red carpet at the event this year.

The socialite/mogul/iconic artist who brought us “Stars Are Blind” (aka the greatest Grammy snub of all time) wore a sheer nude gown covered in colorful floral appliqués. The barely-there look marks one of Hilton’s most daring red carpet ensembles in recent years.

Hilton topped off her Cannes gown with hoop earrings, a blinged-out silver watch, and her massive diamond engagement ring. The 20-carat pear-cut diamond, which is worth a cool $2 million, is pretty hard to miss.

Her fiancé, Chris Zylka, accompanied her down the red carpet, where he served as the official handler of the train of her gown—as any good fiancé of course does. The couple announced their engagement in January after Zylka proposed atop a ski slope in Aspen.

Hilton is the latest A-lister to opt for a naked dress at Cannes Film Festival this year. Kendall Jenner, Sara Sampaio, Irina Shayk, and more also showed off some major skin on the Cannes red carpet.

And in the wise words of The Simple Life icon herself, “that’s hot.”