Paris Jackson uploaded a video of herself lighting what appeared to be a cannabis cigarette whilst hanging out with her pals.

The daughter of Michael Jackson uploaded a cat filter to her face, which added ears and whiskers.

Paris could be seen wearing a blue and red long-sleeved top, accessorised with a few necklaces.

The model gave her boyfriend, Gabriel Glenn, a cheeky kiss at the end of the clip.

Birthdays are good for you

She wrote on the short clip: “Birthdays are good for you. Statistics show that the people who have the most live the longest”

Eleven states in America have so far voted to legalise recreational marijuana for adults over 21 and 33 states have legalised medical marijuana.

The star, who boasts 3.5 million followers on Instagram, recently uploaded a sweet snap of her and her beau.

Paris snuggled up to Gabriel as she perched on his lap and wrapped her arms around him.

The beauty struck a smile to the camera whilst covering up her eyes with a pair of round-framed sunglasses.

Gabriel held on tight to Pairs as he placed his arms around her waist. 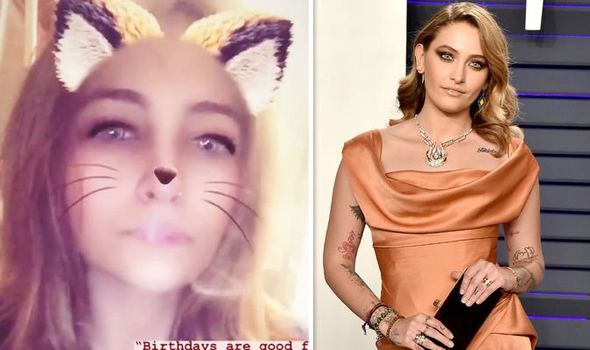 “Just enough dark to see, how you’re the light over me,” she captioned the loved-up photo.

Her followers shared lovely comments on her post, praising the couple.

“You guys are so cute,” one person praised.

Another said: “I love that.”

Meanwhile, last month, Paris declined to comment on her late father after the sexual abuse allegations which were aired in the documentary, Leaving Neverland.

Paris insisted it was “not her role” to defend the King of Pop following the two-part series.

The documentary explored allegations made by James Safechuck, 40, and Wade Robson, 36, who say they suffered sexual abuse at the hands of Michael when they were children.

Paris wrote on Twitter: “There’s nothing I can say that hasn’t already been said in regards to defence. Taj is doing a perfect job on his own.

“I support him. But that’s not my role. I’m just tryna get everyone to chill out and go with the flow, be mellow and think about the bigger picture. That’s me.”(sic)