You’ve heard of BDE before. Now, Pete Davidson is giving off some serious BTE — that’s Big Tattoo Energy — with his latest piece of body art.

“Unicorn on my dude Pete Davidson.”

That’s right. On the comedian’s forearm now lies a tattoo of a beautiful, black and white unicorn. But it’s not your older sister’s unicorn…

The mythical beast on Pete’s skin is majestic, yet distinctly muscular. It isn’t the timid type of creature you’d find in ancient lore, but more like the badass unicorn in Joss Whedon’s Cabin in the Woods that murders lab technicians with its horn. 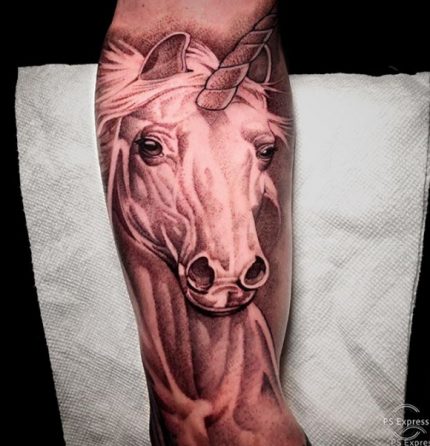 As we know, many of the 25-year-old’s past tattoos have been some type of expression.

Following his breakup with Ariana Grande in October, the comedian covered up his Playboy-inspired bunny ears mask (the one from Ari’s Dangerous Woman era) on the left side of his neck with a large heart tattoo.

Then, in February, Pete covered up his matching Ariana tattoo “Mille Tendresse” — a French phrase made popular by the film Breakfast at Tiffany’s — with the word “CURSED” on the back of his neck.

So, what is he trying to say with this unicorn tat? It could be that, like the mythical beast, Pete is fierce and has magical blood and, therefore, must be protected. 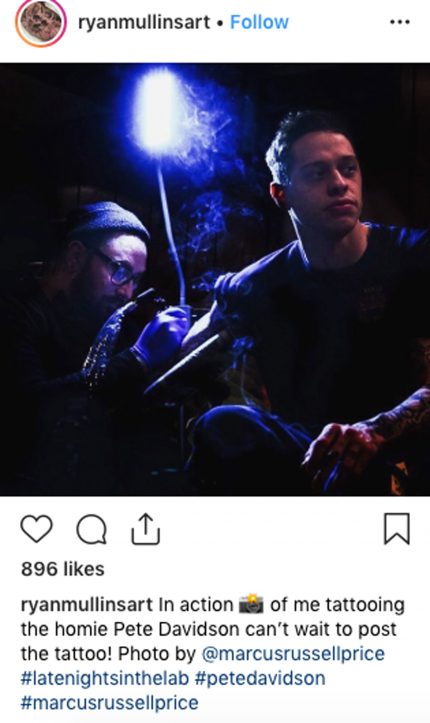 Or it could be a nod to a different type of slang. In the dating world, a “unicorn” means someone who joins a couple for a polyamorous, three-way relationship. Now, we’re not saying Pete is signaling for a third party to join him and Kate Beckinsale…

But we’re not saying he isn’t.

Of course, the unicorn could just be one of the 25-year-old’s many random pieces of body art: he already has Hillary Clinton ink, a large portrait of The Grinch, and seven Harry Potter designs. (Remember, he’s a huge HP fan!)

No matter what inspired Pete to get this new ink, we think it’s working for him. What do U think, Perezcious tattoo critics?