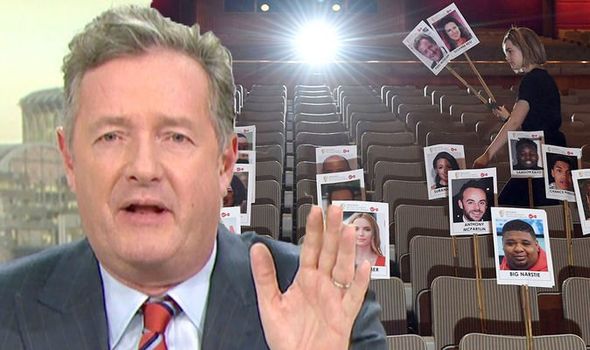 Piers Morgan took to Twitter and Instagram earlier this week to complain about the seating plan at the Virgin Media British Academy Television Awards 2019. The Good Morning Britain host said he was “not happy at all” with his spot for the star-studded ceremony tonight. The 54-year-old shared a snap of his chair at London’s Royal Festival Hall as it was revealed to the world. It saw him placed in the fifth row next to his co-star Susanna Reid, reportedly a staggering 54 seats from the top spot.

Not happy with my current seating placement for Sunday’s BAFTA TV Awards 2019. At all

In a snapshot posted in view of his 571,000 followers, Piers wrote: “Not happy with my current seating placement for Sunday’s BAFTA TV Awards. At all.”

He also echoed his thoughts on the micro-blogging site to his 6.64 million users, which sparked a cheeky reply from organisers.

BAFTA had originally captioned their image: “Just some of the stars you’ll see at the @virginmedia #BAFTATV Awards this Sunday! Who can you spot in the crowd?”

The outspoken ITV regular then told them: “I’d better be nearer the front than that…” which was seemingly all in jest.

The official BAFTA Twitter account replied: “You’ll sit where you’re told Piers!” to which he stated bluntly: “You clearly haven’t worked with me before.”

Piers was seen directly next to Susanna Reid and behind Bros singer Luke Goss and actress Suranne Jones. 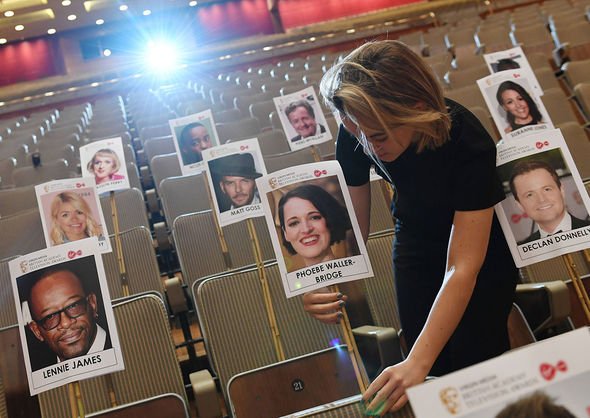 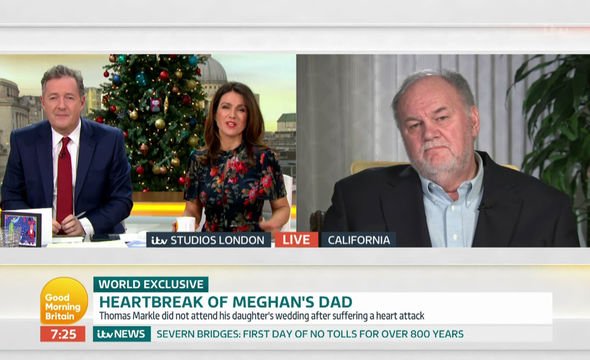 Coronation Street actress Helen Worth, Bodyguard star Keeley Hawes and Queer Eye’s Bobby Berk all had a position in front of him.

His comments drew a number of responses from famous faces, with his fellow GMB star Richard Arnold telling him: “Better to be on the inside of the tent p***ing out.”

While Gilliam McKeith suggested: “Get there early, rearrange the cards and perch yourself in the front row. That should solve it.”

Others fans couldn’t resist poking fun: “At his house would be more suitable to him,” and: “Should be further back.” 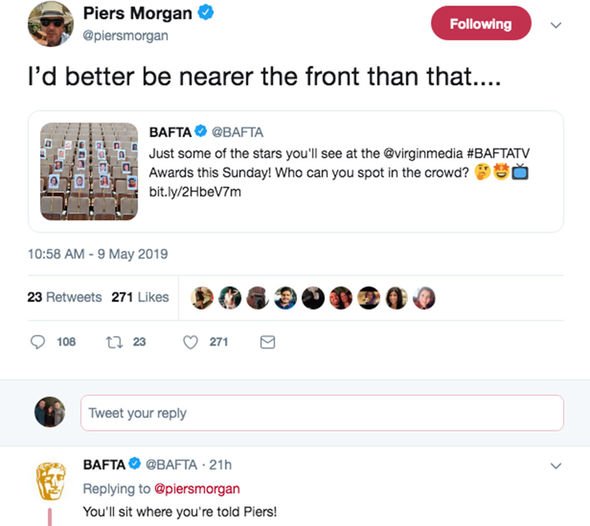 A third tweeted: “Ooh I’d be very happy to have the Goss bros in front of me for an evening! Better view if you’re back a bit too, you’re at the blooooomin’ BAFTAS be glad. Not much on tv Sunday it’ll be great.”(sic)

It comes after it was confirmed Piers’ morning programme had been nominated twice in the same category: News Coverage.

The got a nod for their interview with Meghan Markle’s father Thomas and On a Knife Edge.

GMB are up against Newsnight’s bullying and harassment in the House Of Commons and Channel 4’s Cambridge Analytics Uncovered.

The Virgin Media British Academy Television Awards will air tonight at 8pm on BBC One, while Good Morning Britain continues weekdays at 6am on ITV.