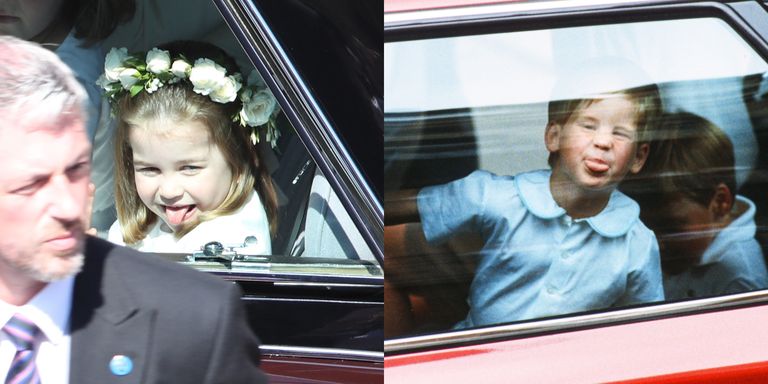 Princess Charlotte is on a roll at the royal wedding. She already impressed us by serving as a bridesmaid during the ceremony and gracing the crowd with the perfect wave, but on top of that, she also showed off her goofy side as she entered the scene.

While arriving to St. George’s Chapel in a car with the other members of the bridal party, the three-year-old was seen briefly sticking out her tongue at the crowd. (Honestly, what better way is there to make an entrance?)

Her little antic might’ve been a light nod to the groom, her uncle Prince Harry. Back in his mischievous toddler days, he would also make funny faces as cameras, like the candid photo above from Princess Beatrice’s birth, and this sweet moment below with Princess Diana at Buckingham Palace.

This appears to be Charlotte’s go-to wedding move, as she pulled of the same stunt at her aunt Pippa Middleton’s wedding last year.

The young princess wasn’t the only one stealing the show; her four-year-old brother Prince George was also adorably in the spotlight. The royal tot was seemed to be unamused and rather tired after the ceremony, but he was entertaining nonetheless.

When Princess Charlotte wasn’t sticking out her tongue and teasing the crowd, her Royal Highness was waving sweetly to the crowd (yet again) during today’s big event.

She also showed off this fun pose at the chapel steps. Look at her go:

Don’t let today’s shenanigans get you fooled; Charlotte is still a total sweetheart. Remember how she kissed her baby brother Prince Louis in those official portraits? We love a princess who’s equal parts sweet and silly.