Pretty, whippet-thin models shrouded in plumes of old cigarette smoke mixed with hairspray, blow dryers roaring away like duelling sabres, racks of clothes you would never actually wear being frantically shuffled along endless corridors, empty pizza boxes strewn about and discarded hot chips ground into the carpet: life behind the scenes at Mercedes-Benz Fashion Week Australia is a chaotic mess that is a far cry from the carefully orchestrated glamour that makes its way down the catwalk. 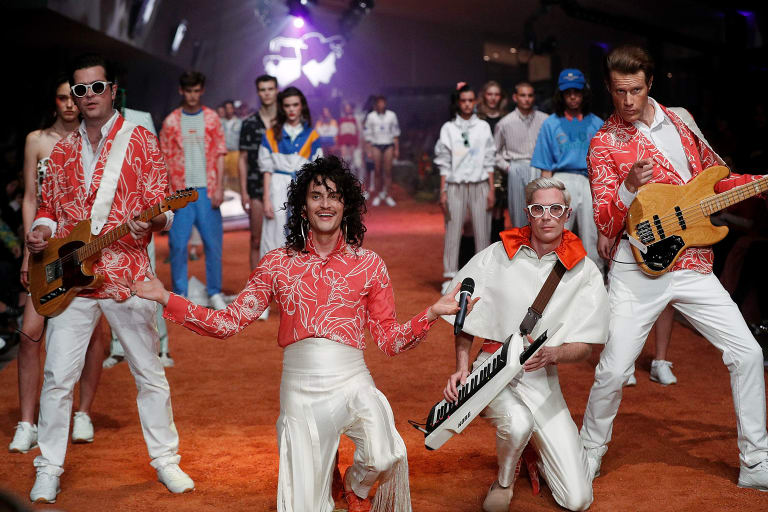 Funsters: Client Liaison made their Fashion Week debut with an homage to 1980s excess and big hair.

Attempting (badly) to mingle backstage with the pursed-lip fashion set this week, PS's cover was eventually blown when one of the few publicists who actually reads a newspaper (most seem to get their "news" from SnapChat) spotted me in the dressing room as one of the biggest and most controversial shows, I.AM.GIA, was about to make its runway debut.

Just as the models were slipping into their G-strings, PS was hurriedly ushered out, but not before making some interesting observations. 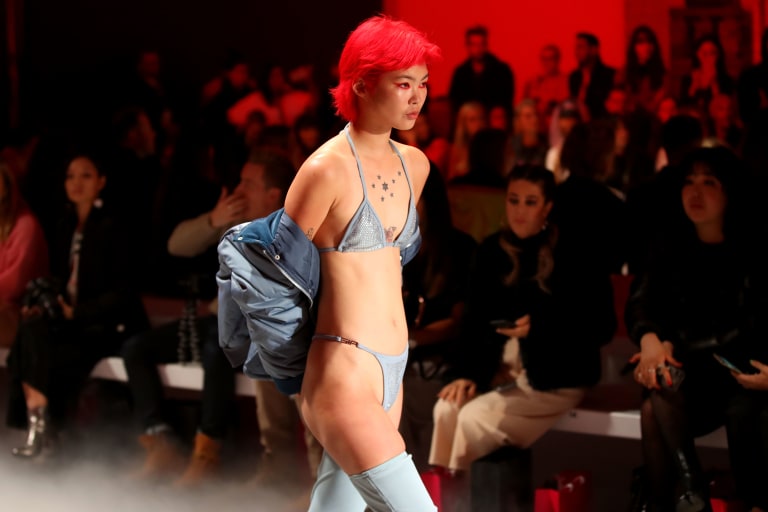 A model walks the runway during the I.AM.GIA show at Mercedes-Benz Fashion Week.

The "blondeocracy" that once ruled Australian fashion is dead. The diversity of models on the runways – at least racially – was more obvious this year than ever before, with faces from Africa, China and Bondi all mingling in a multi-coloured fashion palette, though The Australian's fashion editor, Glynis Traill-Nash, called out why the black models in the GIA show were made to wear leopard print. Racial profiling?

Launched by Alana Pallister only a year ago, I.AM.GIA is certainly a racy label, with lots of exposed flesh, though much of the Australian fashion media are disdainful of the designs, or "cringeworthy" as one fashion stylist whispered to me.

And yet the label has become a huge social media success internationally, especially after supermodel Bella Hadid and singer Selena Gomez endorsed it, sending sales soaring, particularly in the US, where US Vogue, Elle, Harper’s Bazaar, InStyle, Glamour and even Forbes have also featured it.

Over the years, Sydney's fashion week has launched many a big-name designer who has gone on to find international fame, as the likes of Kym Ellery, Camilla Franks (who despite her breast cancer diagnosis put on a spectacular closing show on Thursday), Zimmermann and Alex Perry have. 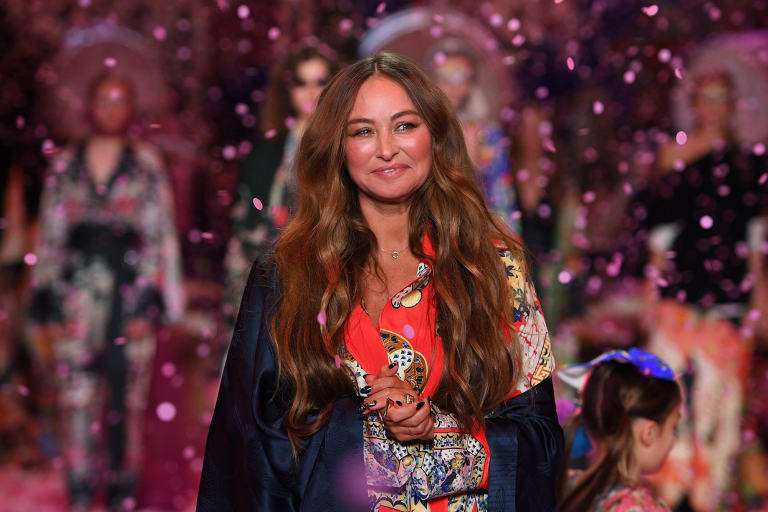 But to get there they need recognition from the international media.

This year there was a discernable lack of coverage from one media organisation in particular: The New York Times, despite the masthead crowing about its ever-increasing presence in Australia.

Some say the red carpets of Cannes blew Sydney out of the news mix this week when it came to fashion coverage, though quietly PS was informed the paper did not think the fashions being paraded in Sydney this week were worthy of their attention. Ouch.

Harper's Bazaar Australia editor-in-chief Kellie Hush agreed some of the shows she had seen were not up to scratch but told PS there were moments of "glory" – you just had to sift through a few inglorious shows to find them.

"They could probably condense it to three days," she said.

Women's Wear Daily and South China Morning Post correspondent Patty Huntington summed it up best: "There is definitely a different breed of newcomer this year, thanks to the power of Instagram, industry connections, pop-culture kudos and Chinese money."

The days of selling your clothes at Paddington Markets in the hope of being discovered are long gone, with social media playing a huge role in designer careers, such as swimwear duo Inder Dhillon and Colby Milano. Their label twosix launched on Instagram and has been so successful they are shipping their bathers around the world.

And there was no shortage of money being spent by pop duo Client Liaison's Monte Morgan and keyboardist and producer Harvey Miller's launch into fashion, the pair staging an over-the-top and high camp ode to 1980s Australian excess, which was described as a runway homage to Pixie Skase, though the sight of puffy denim bomber jackets, fringed pantaloons and lurid trenchcoats would seem to appeal to a very select market of uber hipsters.

Not to be outdone, Chinese designer Leo Lin, the 28-year-old Melbourne-based founder and creative director of fledgling luxury label Leo + Lin, was able to find the estimated $100,000 to stage his ambitious show, hiring press agents and scouring for top models.

PS hears he comes from a very wealthy Chinese family, while some of the frocks being paraded received a tepid response from the fashion mavens PS spoke with.

But that will hardly dent the ever-growing contingent of Chinese fashionistas coming to Sydney, which was most noticeable this week, some of them bedecked in just about every luxury brand name and logo conceivable, with China's Harper's Bazaar, Chinese newsagency Xinhua and a team of Chinese bloggers all making the journey to Sydney. 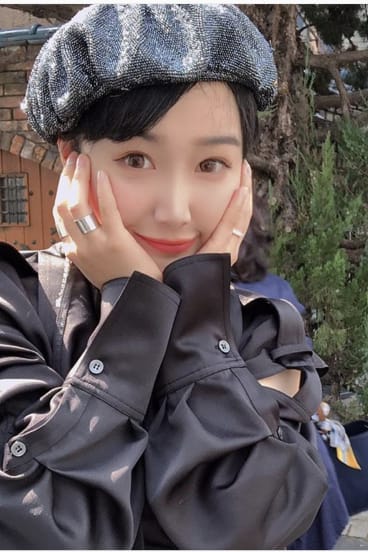 One of them, wearing a smorgasbord of styles and labels all at once, told PS in broken English that Sydney was considered the "Paris" of Asia when it came to fashion.

Paris? Really? Should we expect to see fringed pantaloons in Shanghai soon?

"Aah yes, I think this look very cool, especially for China," she enthused.

Nine months after The Daily Mail issued a comprehensive apology to Kings Cross identity John Ibrahim, the fledgling British media import has reached an undisclosed settlement with him, understood to be worth several hundred thousand dollars. 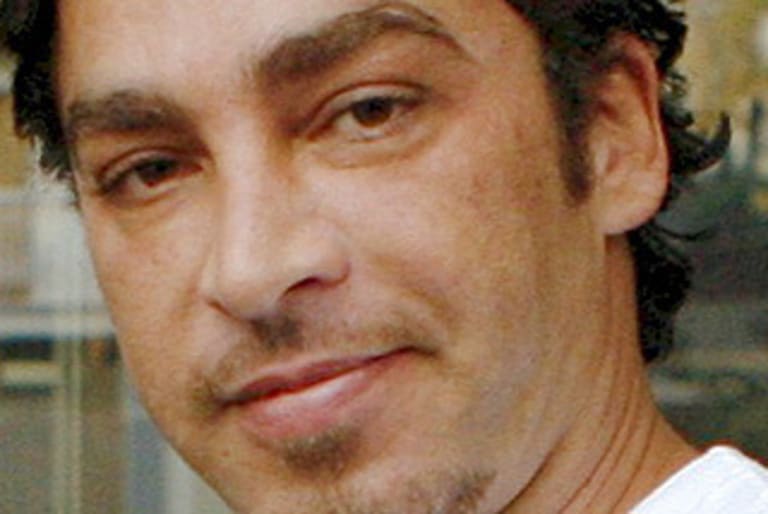 Ibrahim launched legal proceedings against The Daily Mail last year after it wrongly alleged he was involved in an international drug syndicate that led to a spate of raids and arrests across Sydney and Dubai.

Ibrahim did not comment to PS on the settlement when contacted this week, although it is understood to be at the upper end of defamation payouts, but less than $300,000.

The settlement comes amid several other high-profile defamation battles being waged in Australia following Rebel Wilson's record $4.56 million payout from Bauer Media in 2017.

Meanwhile, PS understands negotiations are continuing full-steam ahead for a television series based around the headline-making Ibrahim family, as first revealed by PS in March.

Production company Endemol Shine is involved in the project, with its bosses, influential television executives and brothers Mark and Carl Fennessy, having taken personal charge.

The ambitious series is set to become one of the most expensive productions made in Australia, with each episode carrying a multimillion-dollar budget, dwarfing anything else on local screens.

Star Wars actor Oscar Isaac has been tipped as a contender for the role of John Ibrahim, the patriarch of the family, who is often described as the King of Kings Cross.

Barely 48 hours after it had hung from the fake-tanned frame of one Roxy Jacenko, the over-the-top Italian tulle "mullet" dress that PS reported on last week was back in the window of Five Dock "couturier" Velani. 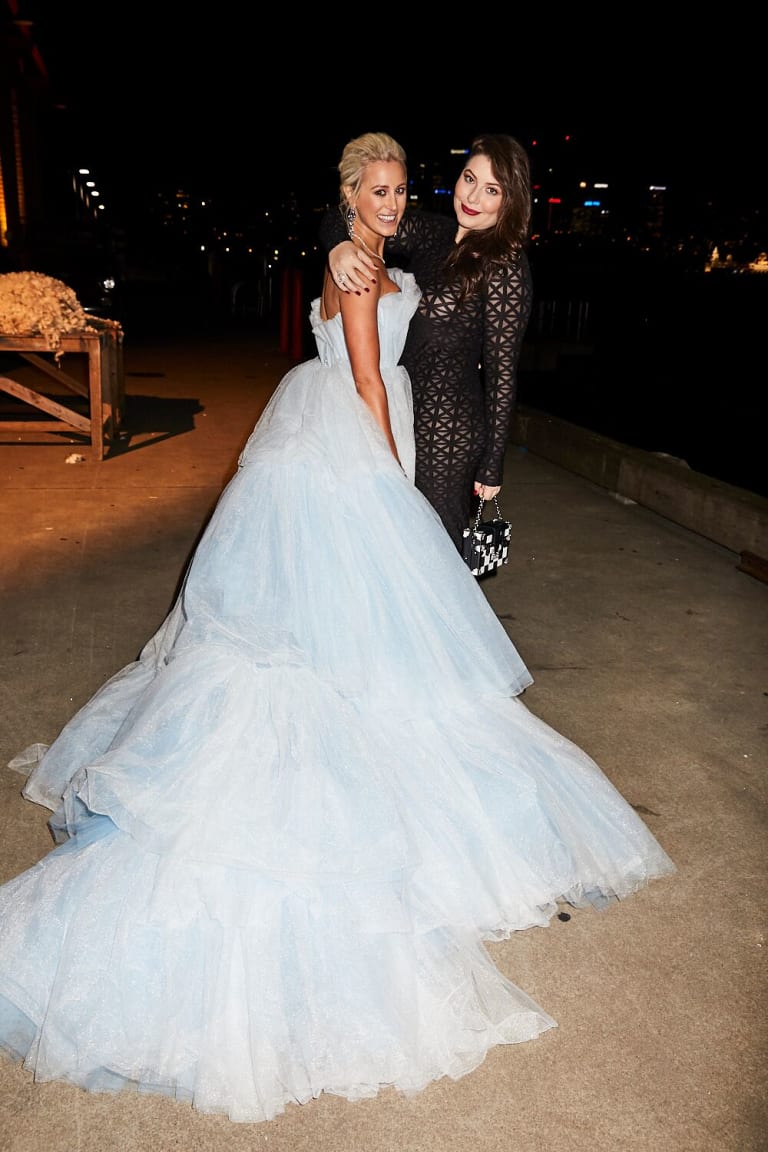 Roxy Jacenko with “bestie” Francesca Packer and the “mullet” dress at the Gold Dinner.

PS spotted the dress on Saturday, the powder-blue confection featuring its bonbonniere-style ruffles in full bloom for passersby on Great North Road, creating quite a scene wedged between the rather more sedate White Ladies funeral parlour and big-hair specialist coiffeurey Chez Jelal. 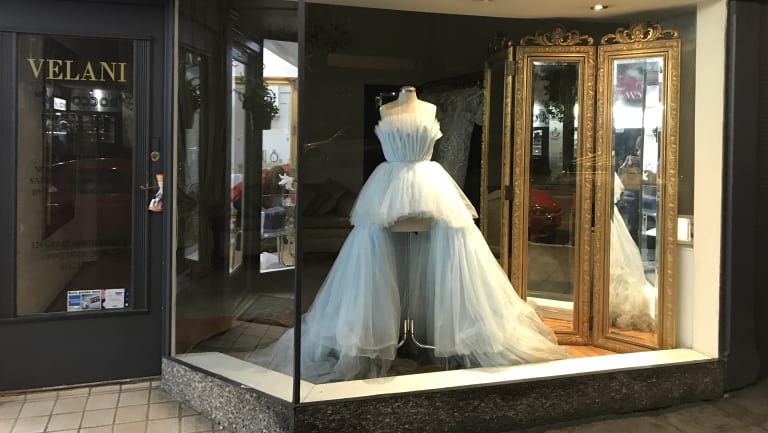 Back on the rack: Roxy Jacenko’s mullet dress in the window of Five Dock “couturier” Velani 48 hours after the Gold Dinner.

The dress, which featured a micro mini hemline at the front and a 10-metre train of tulle at the back, was a show-stopper at the Gold Dinner for which it was created for Jacenko, who no doubt paid for it 10 times over in social media likes on her heavily branded Instagram account.

One of Sydney's biggest names in real estate has been embroiled in an internal investigation at McGrath.

PS has confirmed the "contractor" was the subject of a sexual harassment allegation, with senior management bringing in an outside investigator to conduct a thorough review.

A statement from McGrath said the complaint was made last month "relating to workplace behaviour".

Statements were taken from the parties involved, and while no admission of guilt was made, the senior agent accused of inappropriate behaviour with a female colleague has agreed to several "material sanctions" in order to mitigate the chances of any similar claims being made against him in the future.

The McGrath brand has been embroiled in controversy in recent months. In February, the Herald revealed that McGrath founder John McGrath had a $16.2 million gambling debt to the Tom Waterhouse-run betting company William Hill Australia. 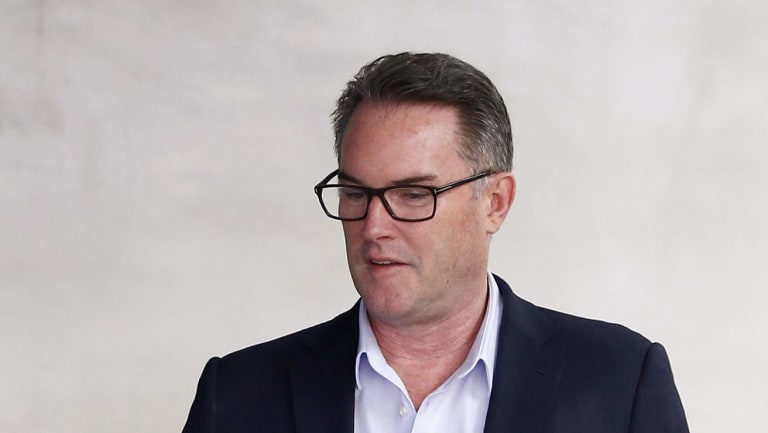 McGrath pointed out his gambling debts were not out of control and were well within his means, adding the debt was not connected to or secured by his shares in the real estate company he pioneered.

Make way for the Rentaroyals

It's the question on many lips this week as a long cavalcade of royal commentators are wheeled out to fill endless hours of media coverage leading up to Prince Harry and Meghan Markle's wedding. 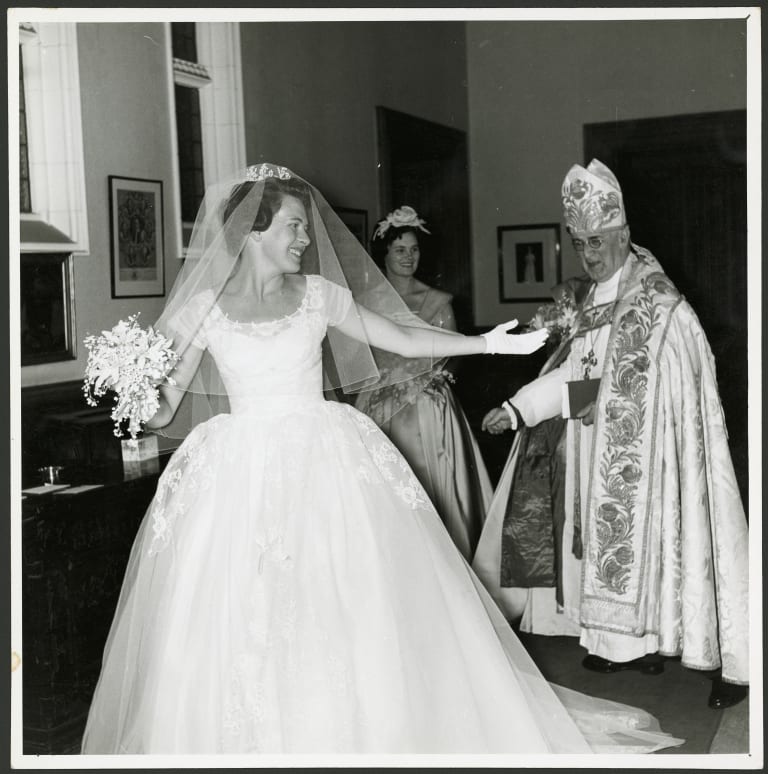 Diana “Bubbles” Fisher, currently missing from the royal wedding debate, pictured on her own wedding day.

With some earning between $300 and $1000 an appearance, the royal rent-a-quotes have carved out a lucrative cottage industry. 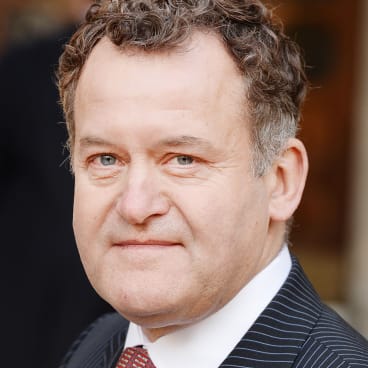 Sydney's Diana "Bubbles" Fisher married Humphrey Fisher in 1959, the son of the former archbishop of Canterbury, Geoffrey Fisher. This gave Diana immediate "royal" status in Australia and she was frequently called on as a royal commentator. But not this week.

Rather, Princess Diana's royal biographers Andrew Morton and Lady Colin Campbell, along with her one-time butler, Paul Burrell, have been hogging the airwaves. Burrell appears to have recreated himself as a royal medium, able to tune into the afterlife with his persistent claims that Diana would be "so proud" of Harry and Meghan. 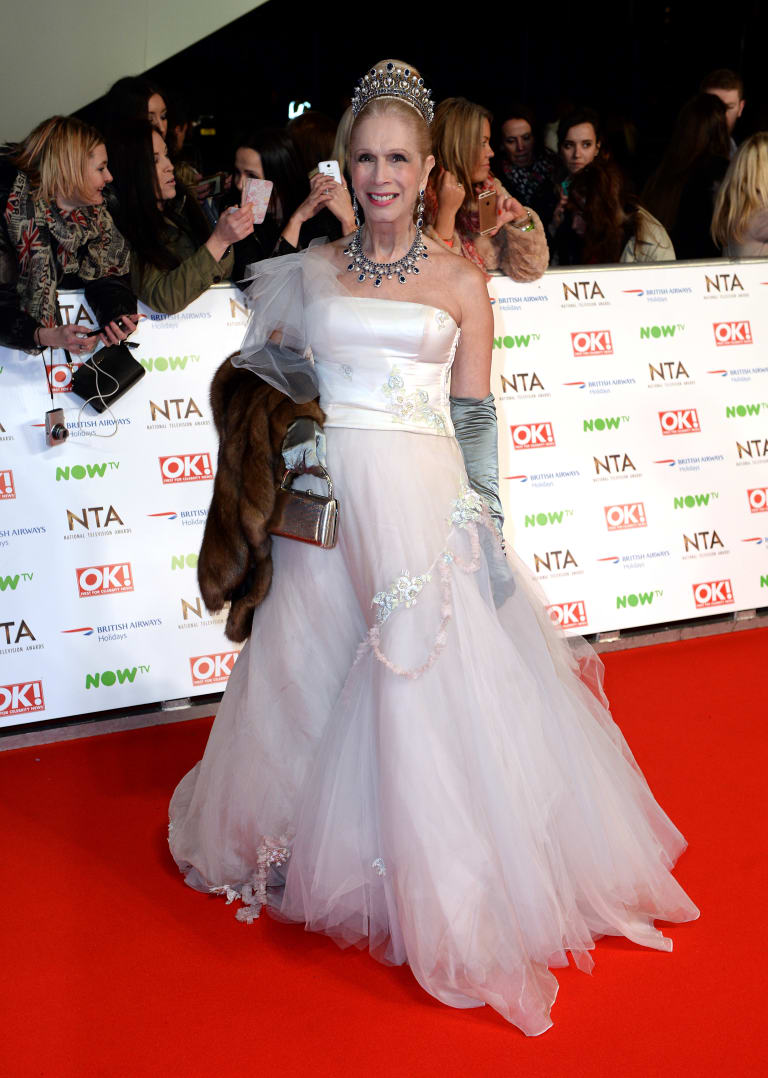 Lady Colin Campbell has been busy talking about the royal wedding.

And it appears no one has bitten on Colin Stanley-Hill this time round. Once billed as a "personal aide to the Queen Mother", he would often be heard on Sydney radio stations and appear on breakfast television with various royal observations until Media Watch checked his credentials with Clarence House and there was no record of him.

But we still have Dickie Arbiter and his lurid ties to keep us entertained. At least his credentials are well known, having been the Queen's press secretary for 12 years.