Cast your mind back to the first half of 2020. Beleaguered as we all were by scary and depressing daily news about the pandemic, the global recorded music industry began to doubt the security of its own near-term future. With retail stores closing and income from performance royalties being hit by the shuttering of bars and restaurants, reports began to emerge suggesting that record labels should brace themselves for a mini-crash.

Such fears were worsened in Q2, when the release schedule of the major music groups grew noticeably thin. (Case in point: The recorded music division of Universal Music Group — the world’s biggest record company — saw its quarterly revenues fall 4.5% YoY in Q2 on an organic basis.)

How 2020 Changed the Music Business Forever

The Best Audiophile Turntables for Your Home Audio System

Lady Gaga's 'Born This Way': Much Better Than 'Express Yourself'

Better news, however, was just around the corner. Midia Research has published its estimate of what the global recorded music industry — including majors, indies, and DIY artists — generated across the course of 2020 in wholesale/trade revenues. Midia’s figures suggest that the recorded music business saw revenues of $23.1 billion in the year. That was up 7% on 2019, and represented a $1.5 billion monetary increase year-on-year.

Midia notes: “Although the [worldwide] recorded music business experienced a dip in the earlier months of the pandemic, the remainder of the year saw industryrevenue rebound.” That rebound, notes Midia, saw the global recorded music business’s quarterly revenues bounce up 15% YoY in Q4 2020, “suggesting a strong 2021 may lie ahead if that momentum continues”.

Interestingly, global annual recorded music streaming revenues actually grew faster on a monetary basis in 2020 than they did in 2019.

Midia’s numbers suggest that total (recorded music trade) streaming revenues grew by $2.3 billion (+19.6%) to $14.2 billion in 2020. In the prior year, the research company notes, annual streaming growth weighed in at $2.2 billion. 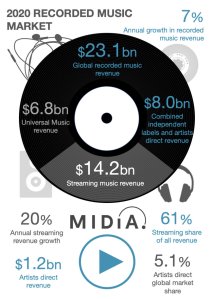 Midia’s numbers suggest that combined, the three major music companies lost a little global market share in the 12 months, falling from 66.5% in 2019 to 65.5% in 2020. Notes Midia: “While this shift is part of a long-term market dynamic, most of the dip was down to WMG reporting flat revenues for the year.”

Another factor here was one of the biggest industry stories of 2020: The continued growth of the DIY artist sector. DIY artists uploading their music via the likes of TuneCore, DistroKid and SoundCloud generated $1.2 billion globally last year, says Midia.

This “artists direct” sector saw a 34.1% growth in annual revenues in 2020, according to the company’s numbers, and broke the billion dollar mark for the first time. “Artists direct” grew their collective market share by more than a whole point to 5.1%, says Midia.

Midia’s MD, Mark Mulligan, said: “The recordings business managed to deliver a strong performance due solely to the growth of streaming. Streaming has been the engine room since the recorded music business returned to growth, but the fall in performance and sync revenues due to the pandemic highlighted just how overly dependent the global music business has become on streaming.

“With lots of private equity money now pouring into creator tools companies like Native Instruments, expect this space to hot up even further in 2021. The recorded music business is changing, and it is changing fast.”