Drummond starts with a head of romaine lettuce. She brushes the cut side of the lettuce with olive oil and sprinkles salt and pepper on top of it. She does the same thing to the tomatoes and lemons. Drummond says the olive oil helps with the grilling process.

Next, Drummond places the lettuce, tomatoes, and lemons cut-side down. “I think grilled romaine is so cool,” says Drummond on her show. “It’s sort of about the flavor, but it’s also about getting these kind of dramatic grill marks on the lettuce, which is not something that is historically typically grilled. So, I just think it’s a pretty cool presentation. Grilled caesar salads have sort of been cropping up all over the place.” 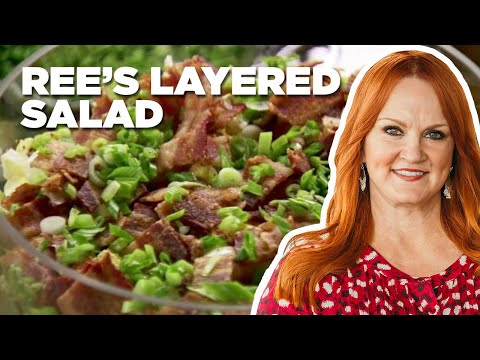 Next, Drummond makes caesar dressing for the salad. She says she loves the taste of homemade dressing. “I think there’s nothing better than good, homemade caesar dressing,” says Drummond.

Drummond starts by placing anchovies in a food processor. She jokes that no one thinks they like anchovies, but they really do. After the anchovies, Drummond adds minced garlic, lemon juice, balsamic vinegar (she says you can also add red wine vinegar), and Dijon mustard. She says Dijon mustard is not a traditional ingredient in caesar salad but sometimes the definition changes. She tells home cooks they can add what they like.

Next, Drummond adds Worcestershire sauce along with salt and pepper. She briefly runs the food processor so she can mix the food. After that, Drummond checks on the vegetables. She says the point is not to char the vegetables. It’s enough for them to just get a little smoky.

After checking on the vegetables, Drummond finishes the dressing. She slowly adds olive oil to the food processor while she pulses the machine. The last ingredient Drummond adds is Parmesan cheese. She says she likes to add the cheese at the very end and pulse it in the food processor.

Next, Drummond removes the romaine lettuce from the grill and places it on a platter. She says the ends of the lettuce get crispy and you get a little bit of flavor on the ends. She also removes the tomatoes and lemons. She says you can use one of the lemon wedges for your caesar dressing if you’d like. Drummond prefers to use straight lemon juice. You can find the complete ingredients list and directions here.