After years of excess, he became an unlikely teetotaller – but now it appears that Russell Brand has bought a pub.

The comedian and his wife, TV presenter Kirsty Gallacher’s younger sister Laura, are understood to have recently taken ownership of the Crown Inn in Pishill, near Henley-on-Thames.

Nestled in the picturesque Oxfordshire countryside, the Grade II listed coaching house, which dates from the 16th Century – comes with a detached barn which can host weddings for up to 80 people.

New purchase: Russell Brand and his wife, Kirsty Gallacher’s sister Laura (both pictured in 2018) are understood to have bought the Crown Inn in Pishill, near Henley-on-Thames

When it went on sale in April for offers starting at £850,000, estate agent Rightmove said: ‘The picturesque backdrop of the grounds makes the property an ideal choice for weddings and events and attracts plenty of trade throughout the year.

‘The property has an additional two-bedroom self-contained cottage within the grounds.

‘And lastly, there is also a separate two-storey outbuilding, which… could easily be converted to further letting accommodation.’ 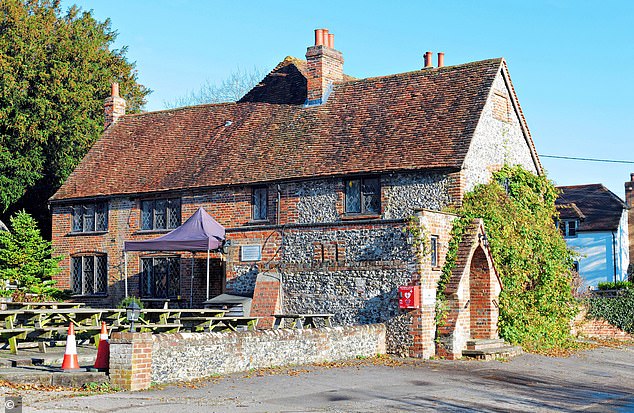 Pub: The Grade II listed coaching house (pictured), which dates from the 16th Century – comes with a detached barn which can host weddings for up to 80 people

Mr Brand, 46, and his wife, 34, who tied the knot in August 2017 at an intimate service near their Henley home, have found success in their other company, which specialises in TV production.

The couple shared a £1.4 million dividend in 2020, according to company accounts.

Despite famously calling for a ‘socialist egalitarian’ revolution during a Newsnight interview in 2015, Mr Brand has amassed a net worth of about £15 million thanks to his business interests and a string of luxury properties.

Mr Brand quit alcohol and drugs in 2003, telling The Guardian in a 2013 interview: ‘My life has improved immeasurably. I have a job, a house, a cat, good friendships and generally a bright outlook.’