Strictly Come Dancing: Seann Walsh and Katya Jones get a shock reprieve after THAT scandalous kiss… as Katie Piper is voted off show on the DAY of her acid attacker’s release

Seann and Katya’s survival on the show came at the end of a decidedly scandalous week, after pictures were published of the pair passionately kissing on a London street – despite them both being in serious relationships at the time.

And Katie’s departure from the show, which was taped on Saturday evening, proved to be a devastating blow in more ways than one, as it occurred a day after her 35th birthday — and on the day of her acid attacker Stefan Sylvestre’s release from prison. 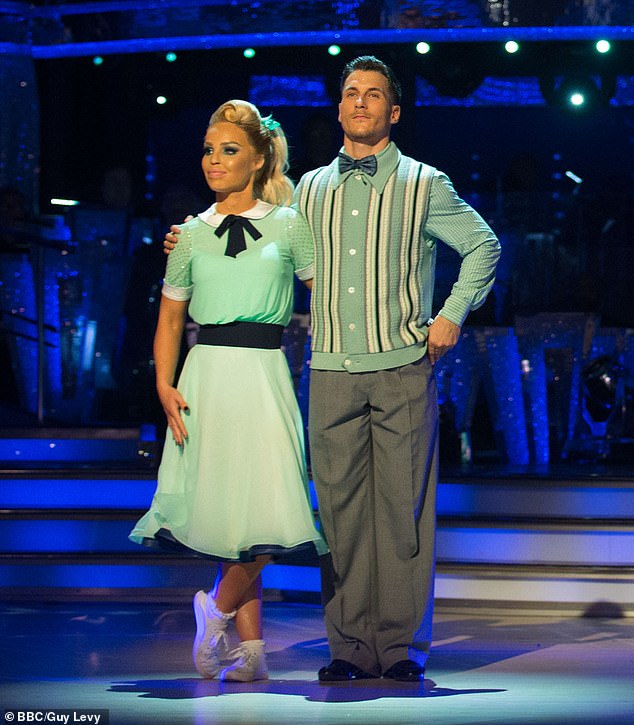 Seann’s survival on the show left Strictly fans in an uproar on Sunday, after watching how the 32-year-old comedian and his Russian dance partner, 29, couldn’t contain their delight as they discovered they had been saved by the public’s vote.

Katya was seen screaming ‘thank you’ as she put her face in her hands and threw her arms over Seann.

Meanwhile, at the end of the episode, talking about being saved, she cryptically said: ‘I’m looking forward to a new week, come on, let’s do it!’ 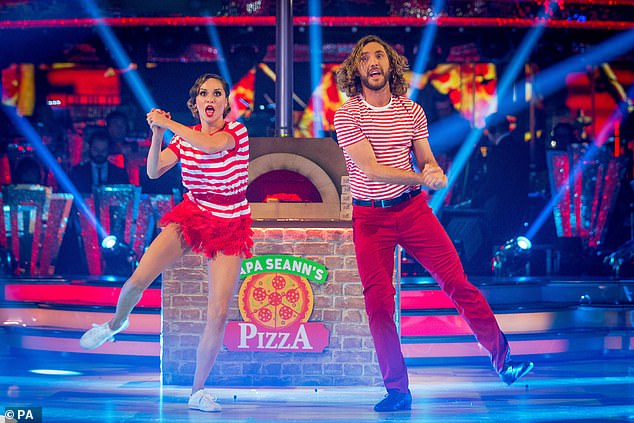 Saved: Her exit meant that Seann Walsh defied bookies odds as he remained on the show, after a scandal-ridden week following his kiss with dance partner Katya Jones

Taking to Twitter, a host of fans aired their grievances, with one viewer ranting: ‘How the heck is Seann Walsh and Katya Jones still in the competition?’

Another fans of the show wrote on the micro-blogging site: ‘Seriously who is voting for Sean and Katya?!’

Echoing a widely-shared sentiment, a third show watcher commented: ‘Who the b****y hell is voting for Seann and Katya?! For Christ’s sake.’

It’s been a busy weekend for Katie, who was shown being eliminated from the show on the same day that she took part in the Royal Parks Half Marathon.

She looked to be her usual jovial self as she took part in the run through the rain-sodden parks of the English capital, betraying her at-the-time secret elimination from Strictly, and disappointment at the release of her acid attacker a day before.

The star appeared to allude to her woes on Instagram, when she said she was using ‘meditation to stay calm and centred today’ alongside the message: ‘Go within every day and find the inner strength so that the world will not blow your candle out.’

The quote by American dancer and social activist Katherine Dunham follows the release of Stefan Sylvestre, 30, who left her with horrific burns in 2008.

The thug, who was released from Highpoint jail, Suffolk, on the same day as Katie’s birthday, has been warned he is not to step foot in a designated ‘exclusion zone’ stretching around Katie’s home.

His release sparked a rush to surround the star with security and Strictly Come Dancing chiefs were given the go ahead to cover Katie with extra security, The Sun revealed.

Katie, 35, and Charles, 45, were forced to repeat their routines from Saturday’s after the judges scores were combined with the results of the viewers’ votes to decide the lowest scoring two couples.

The result served as a shock reprieve for Walsh and married dance partner Katya Jones, 29, who had faced repeated calls to quit the show after they were pictured kissing on a London street. 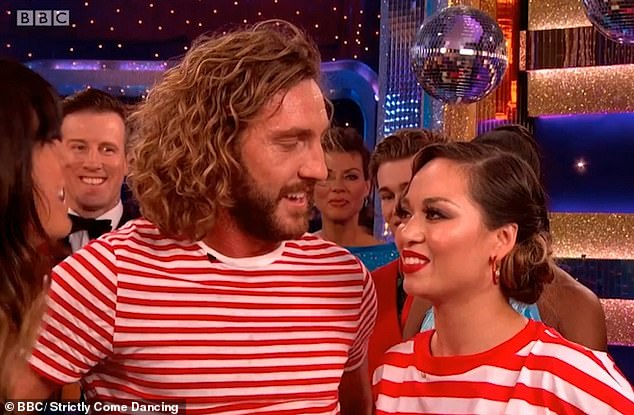 It started with a kiss: The pair have been at the centre of an avalanche of headlines after they were photographed kissing passionately on a London street

Bookmakers had given the pair unfavourable odds off 6/4 to face elimination on Sunday night, but their lively Charleston to Lunchmoney Lewis hit Bills did enough to impress judges Craig Revel-Horwood, Darcey Bussell, Bruno Tonioli and Shirley Ballas.

Instead, it was Katie and Strictly pro Gorka Marquez quick-stepping their way to the exit after a well choreographed Jive to Why Do Fools Fall In Love by Frankie Lymon and the Teenagers failed to hit the spot.

All four judges opted for Charles and dance partner Karen Clifton, whose Salsa to Use It Up and Wear It Out by Odyssey proved to be marginally stronger on the night.

‘I have taken a lot from this experience and it has all been really positive, and I’ll never forget this journey,’ said a graceful Katie following her elimination. 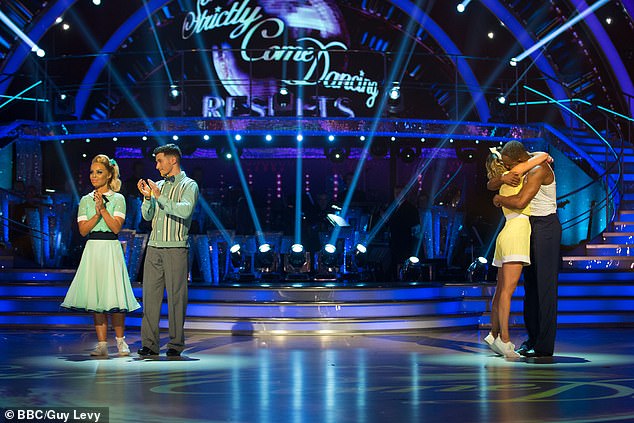 Ballroom battle: Katie was sent home after dance-off against Charles Venn and Karen Clifton, who hugged once they learned they were remaining on the show 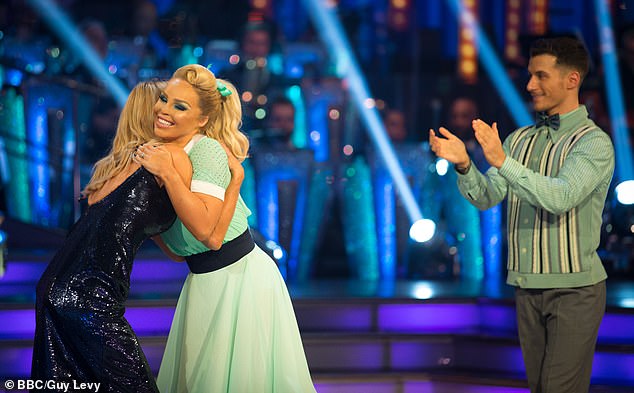 Hug it out: The star shared a hug with Strictly co-presenter Tess Daly as she said her goodbyes

‘Charles was the better dancer out of us two and there are some brilliant dancers in this competition and sadly I don’t think I was one of them!

‘But I have had a great experience you know and I feel really privileged to have been here and thanks for your advice, and thank you (Gorka) for all the hours!’

She added: ‘One thing as well all the public not just the audience here but the general public have been so supportive online and have voted for me the other weeks so I feel thrilled to have been here for four weeks. So thank you to everyone.’

Katie’s axe comes following the release of Stefan Silvestre, who served a ten-year jail term after leaving her with horrific, life-changing burns following an acid attack arranged by her ex-boyfriend Daniel Lynch in 2008.

Sylvestre attacked her in Golders Green, North London leaving her partially blind, with severe scarring to much of her body after throwing sulphuric acid at her face on the orders of Lynch. 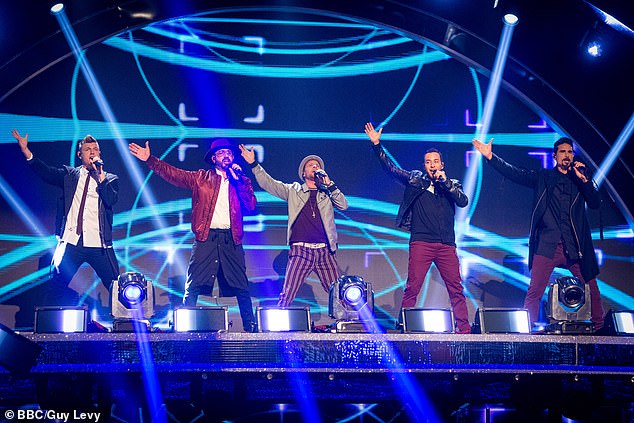 Taking to the stage: During the episode, the Backstreet Boys took to the stage to perform 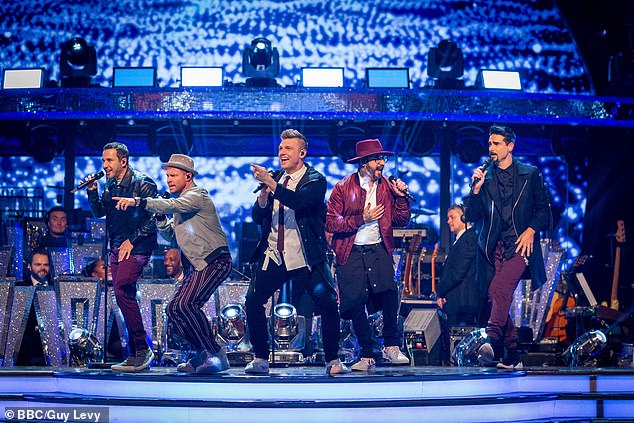 Bust a move: They kept the crowd entertained as they pulled out all their best dance moves 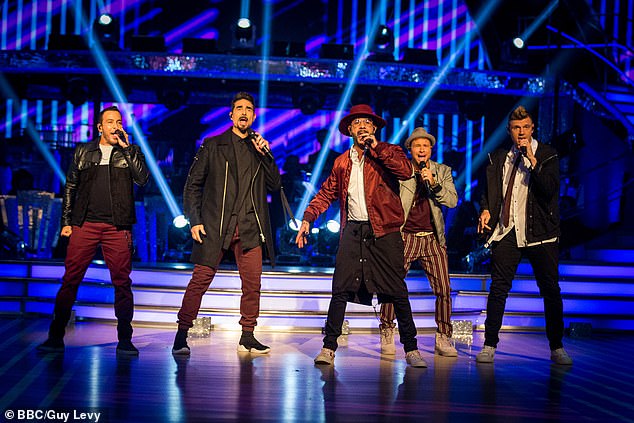 Hitting all the right notes: They also impressed the audience with their vocals on the show

And asked if he had any parting words for Katie on Sunday evening, Gorka toouched on the incident and what has been a difficult week for the presenter.

He said: ‘Well first of all thank you, for being such a wonderful human because you know everyone knows how much you have been through and everything but to get the chance to know you and be working with you and get to know how strong you are, how always wanting to be better and improve.

‘For me that’s my lesson and what I learnt from you.’

Strictly Come Dancing returns on Saturday 20th October at 6.45pm with the results show on Sunday 21st October at 7.45pm on BBC One.

Applause: The stars received raucous applause from the audience as they performance ended 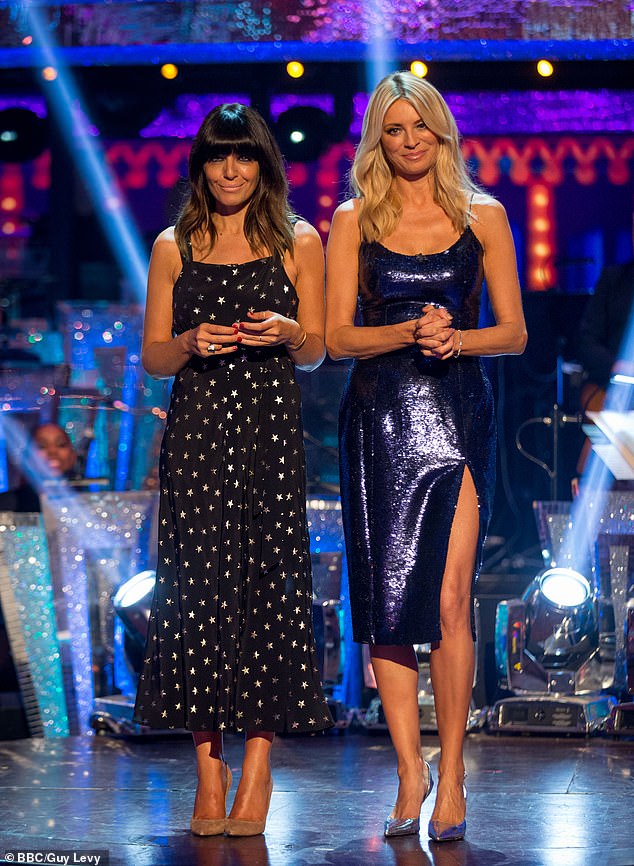