SEBASTIAN SHAKESPEARE: Roxy Music star Andy Mackay wants the Soho party over before the London nightspot – where he’s lived for decades – becomes submerged beneath ‘a nightmare’ of squalor

Who would have thought the original glam rocker and founder member of Seventies group Roxy Music would be heading a plea for a quiet life in the heart of the West End?

As Roxy’s spirited saxophonist, Andy Mackay favoured sporting silver jumpsuits and gold lame trousers alongside fellow band member Bryan Ferry and he co-wrote their hit, Love Is The Drug. He now seems to have undergone a metamorphosis into a grumpy old man.

The working-class rock star, who once said the best thing about being in a famous band was the girls, tells me he fears his beloved Soho, where he has lived for decades, is about to be submerged beneath ‘a nightmare’ of squalor.

As Roxy’s spirited saxophonist, Andy Mackay (third from the right) favoured sporting silver jumpsuits and gold lame trousers alongside fellow band member Bryan Ferry and he co-wrote their hit, Love Is The Drug. He now seems to have undergone a metamorphosis into a grumpy old man. Pictured: Band members of Roxy Music

This hideous prospect is a consequence, he claims, of attempts to kick-start the economy by permitting off-licence alcohol sales by restaurants, pubs and bars until whatever time their licence currently permits them to serve customers imbibing on their premises.

‘It’s very ill thought-out,’ moans Mackay, 73, explaining it would mean alcohol being served into the small hours of the morning to those wandering the streets.

‘There are 122 late licences in Soho, some of them going up to 6am. It would be a disaster.

‘We all know there are no public lavatories any more: you see lots of people trying to get into pubs to use the toilets.’

Perhaps Mackay has his mind on higher things. In 1988, he largely abandoned music to take a three-year Bachelor of Divinity course at King’s College, London. He regularly worships at St Anne’s church in Soho, and his most recent release, 3 Psalms, marks his musical journey, from his chorister youth to Roxy.

‘It’s a question of balance,’ he insists. ‘If there is disorder and unpleasantness, it will put back the re-opening of the theatres and the civilised life we all want back.’

Never previously renowned as a ladies’ man, celebrity chef Nigel Slater has been professing his admiration for one sultry member of the opposite sex, fellow TV cook and writer Nigella Lawson.

‘We’re very much on the same wavelength.

‘I’ll come across a recipe of hers and think, “Damn,I wish I had thought of that.”

Nigella began her small-screen career as a guest on Nigel’s first TV series before landing a show of her own.

Some helpful advice for women of a certain vintage, from comedian and actress Jenny Eclair.

‘Don’t drink Pimm’s on a hot day,’ she says, ‘unless you fancy falling into a flowerbed mid-afternoon.’

Despite turning 55, actress Sadie Frost proves she is still young at heart.

The former gatekeeper to the hedonistic Primrose Hill Set unveiled a new tattoo at the weekend as she shared a picture of herself in a black bikini top with ‘Choose Life’ written in black ink across her ribs. 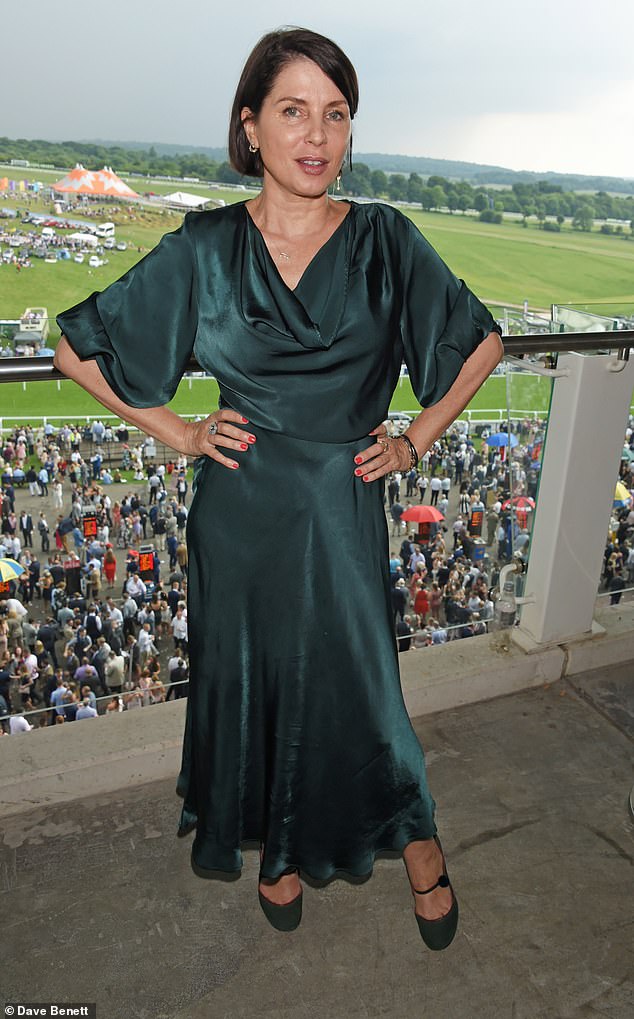 Although Sadie chose not to elaborate on its meaning, she tagged the similarly named refugee charity, Choose Love, in the online post. 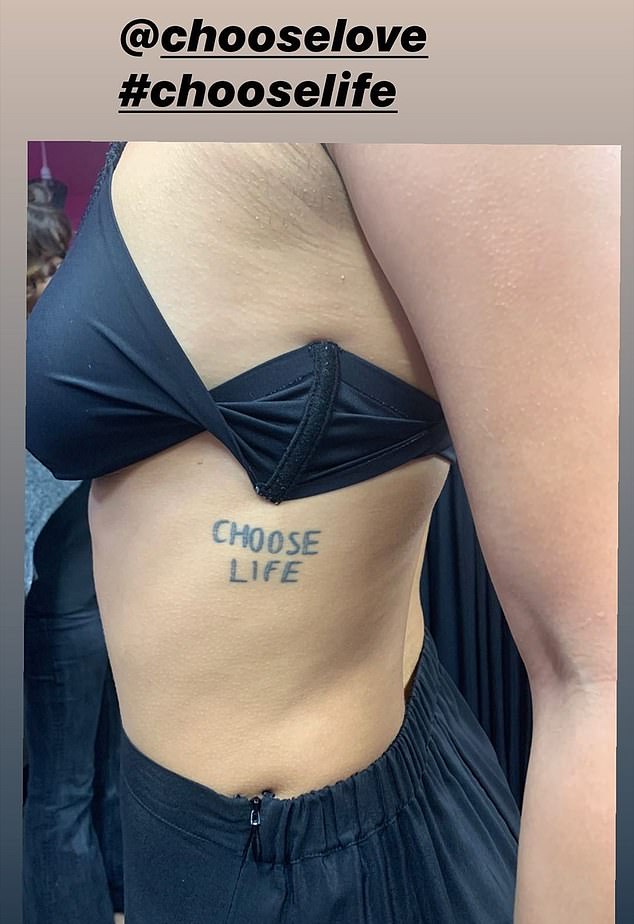 Although Sadie chose not to elaborate on its meaning, she tagged the similarly named refugee charity, Choose Love, in the online post

And it seems her penchant for sharing scantily clad snaps hasn’t diminished with age, either.

‘I still feel relatively comfortable with myself,’ she says of her body.

Explorer Robin Hanbury-Tenison, who staged a remarkable recovery from coronavirus, has enjoyed a poignant first meeting with the grandchild he thought he’d never see.

The adventurer, 84, who spent three weeks on a ventilator, was introduced at the weekend to Loveday Hanbury-Tenison, who was born last week.

Loveday is the daughter of Robin’s son Merlin, 35, and his wife, Lizzie. ‘I’m tremendously excited,’ Robin tells me.

‘When I was in intensive care, one of the things that kept me going was wanting desperately to stay alive so I could meet her.’

Robin is already plotting his next expedition — for a cause he believes saved his life. He’s to lead a walk up Cornwall’s highest point, Brown Willy, to raise money for the NHS.

Strictly Come Dancing pro Katya Jones might have been banished from the ballroom during lockdown, but her desire to dress up remains insatiable.

‘Me and my friends have had Zoom parties.

Pictured: Katya Jones at  ‘The Girl on the Train’ film premiere in London in September, 2016

‘We had a New York one, so I dressed up as the Statue of Liberty, as you do,’ admits Katya, 31, who has been isolating alone in London after splitting from her husband, fellow Strictly dancer Neil Jones, last year.

And it doesn’t stop there. ‘I gave myself themed days,’ she adds. ‘I had Japanese day, I had hippy day, I had a 1920s day in my little Charleston outfit.

‘I don’t think I wore pyjamas all day one single time. It makes me feel purposeful.’

The Love Actually star is a fan of Blige’s R&B music, but when he met her at last year’s Baftas, things didn’t go to plan.

‘I walked into the darkness of the backstage, and there was Mary J.Blige,’ he says.

Mind your language! Idris is lost for words

Luther star Idris Elba believes his acting career would be much more lucrative if he were multilingual.

The 47-year-old Hackney-born actor, who is married to Sabrina Dhowre (pictured), advises younger counterparts to brush up on their foreign languages. 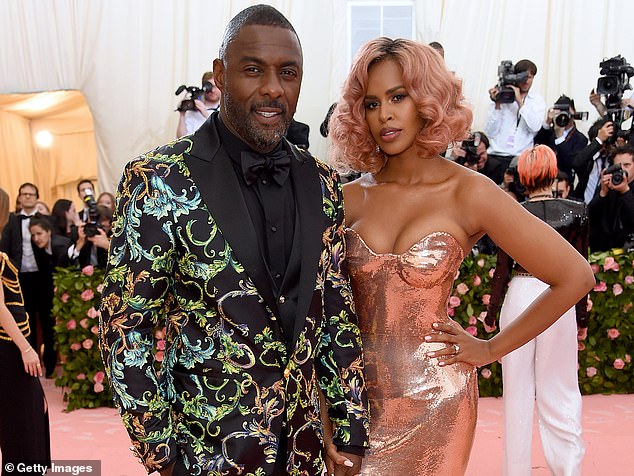 Pictured: Idris Elba and Sabrina Dhowre at the 2019 Met Gala Celebrating Camp: Notes on Fashion at Metropolitan Museum of Art

‘I would say learn a few languages because I didn’t, and any language I’ve learnt, apart from my Mum’s Creole in Sierre Leone, I’ve had to learn in bite sizes for a movie.’

He adds: ‘Lord, do I wish I could speak French or Spanish, I would have jumped into so many markets as an actor.

‘It really would have been a door-opener for me.’