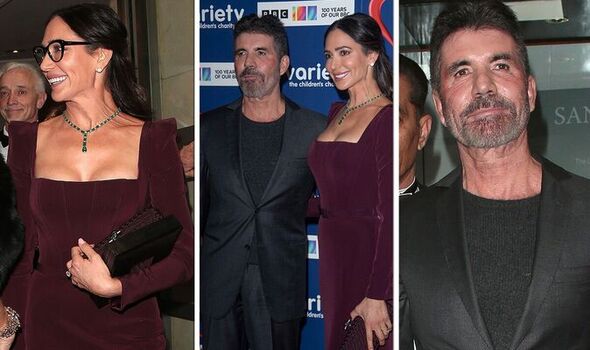 While Simon opted for an all-black number to show off his newly thinned physique, Lauren showed off her curves in a busty burgundy gown.

Simon revealed the dramatic shift was due to overhauling his entire diet and eating habits in 2020 shortly after breaking his back in an electric bike crash and when a doctor said he was eating like a 1960s schoolboy.

The TV personality now also reportedly walks 40 miles a week and has worked on maintaining a better work-life balance.

At the star-studded event, Lauren gave a candid insight into Simon’s parenting while presenting him with his Silver Heart.

She emotionally noted: “It means so much to me as a mum for our son to have a father, and my elder son Adam to have a stepfather who is such an amazing role model in so many ways.”

Simon paired his sleek and shiny matching jacket and pants with a knitted jumper underneath.

Pairing the square neckline with a statement gemstone necklace, the socialite looked reminiscent of Anne Boleyn.

The dramatic change has stirred rumours of a gastric band surgery, which the star has vehemently denied.

Simon Cowell and his fiancée Lauren Silverman famously met in 2004

Simon proposed to Lauren on Christmas Eve last year in Barbados, where they first met.

Simon Cowell and Lauren Silverman have a child together, Eric, eight

In her heartfelt speech, Lauren revealed: “Simon has been teaching our son Eric the value and the importance of helping others.”

Simon’s accolade was awarded for Exceptional Generosity in Philanthropy.