The subtitle of Station 19 might as well be "Ben Warren’s Mid-Life Crisis," seeing as the show follows Ben’s drastic career shift from Grey’s Anatomy surgeon to firefighter. Let’s not forget that he was an anesthesiologist before working in surgery, so big professional changes are apparently just in Ben’s nature. Thanks to eagle-eyed Friends fans, we even now have an excuse to believe that in an alternative universe, Ben was already a firefighter long before he turned up at the firehouse in Station 19. Yes, the whole point of the spinoff series is that he’s an old rookie, but this Station 19-Friends crossover with Ben Warren will still make you giggle.

When it comes to actors of a certain age who only became household names in the last decade or so, you can likely find a guest appearance on Friends at some point on their resume. Catching these now big stars in old Friends reruns is a favorite hobby of mine, but the celeb sighting that the Reddit user apple_sandwiches experienced is one that feels particularly relevant in today’s TV world. The Friends fan recently shared a screenshot of a very young, very attractive Jason George, aka Ben, in a 2001 episode of the sitcom, "The One Where They’re Up All Night."

George isn’t the only Grey’s Anatomy star to appear on Friends — remember when Ellen Pompeo played Ross and Chandler’s mutual college crush? — but in a move of art foreshadowing (fake) life, he played a firefighter in the episode. 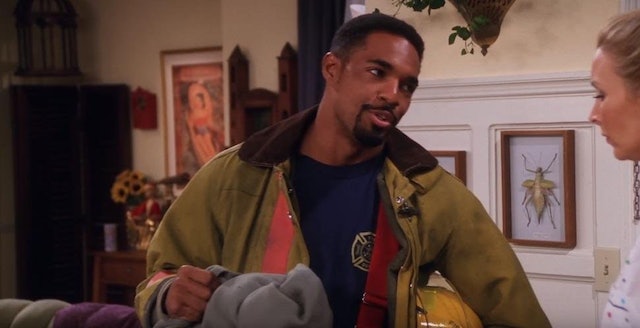 Young Ben Warren, is that you?

Of course, even if we were willing to concoct a backstory involving Ben’s first grown-up job as a firefighter and his cross-country move to pursue medicine, George’s Friends cameo is obviously just a funny coincidence. After all, aren’t most sitcom guest roles just doctors, cops, or firefighters? Plus, a go-to rule for making a successful TV series is to set it in a hospital or police/fire station, so the odds of someone playing these kind of roles full-time in Hollywood are pretty high.

In case you can’t recall the Friends episode based on that one shot (and what kind of fan are you if you can’t?), "TOW They’re Up All Night" begins with the group on the apartment building’s roof at night, trying to spot a comet for Ross’s sake. Everyone but Ross and Joey gives up on the search and heads inside, but the whole gang is in for a sleepless night in one way or another. For Phoebe, her beeping smoke detector keeps her awake, and the incessant noise drives her to destroying the machine and tossing it down the garbage chute.

Young Ben Warren (OK, OK, Jason George) pops up when he discovers the abandoned, still droning smoke detector in the trash and brings it back to Phoebe’s apartment. He instructs her on how to turn off the noise, but because Phoebe smashed the alarm, its reset button is no longer. Just a typical call for your average New York City firefighter, right?

While George’s onetime Friends job is a sweet insight into just how small the world of acting can be, he’s certainly not finished donning a fireman’s jacket. Station 19 was renewed for a second season earlier this month, assuring us that, at least for now, Ben isn’t changing careers again anytime soon. If Season 2 ends with his groundbreaking decision to return to the hospital, we can always comfort ourselves with the idea that Ben’s Manhattan alter ego has now retired from a full and thriving career as a firefighter.

Station 19 returns to ABC this fall.