Sterling K. Brown took “This Is Us” viewers on an emotional ride during the Season 5 premiere on Tuesday.

The 44-year-old's character, Randall, engages in an intense fight with Justin Hartley’s character, Kevin, as he begins to question if he even has the same birthday as him and their sister Kate, played by Chrissy Metz.

As they all deal with the coronavirus pandemic, Brown’s character falls into a deep depression after hearing about the death of George Floyd and the racial reckoning that followed the May 25 police-involved shooting.

In a conversation with his adoptive daughter Dejah’s boyfriend, Malik, Randall recalls an instance of police brutality he witnessed as a child, the case of Jonny E. Gammage who died of suffocation while an officer kneeled on his neck and held him down with a baton, according to the Associated Press. 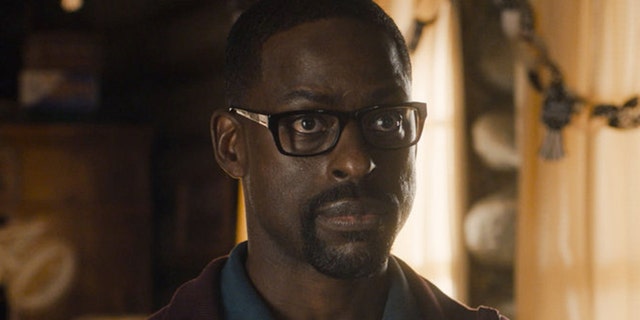 Sterling K. Brown as Randall grapples with the emotional trauma of police brutality in the Season 5 premiere of "This Is Us."
(NBC)

Brown’s character reveals that he never emotionally addressed how he felt about it while growing up in a predominantly White household.

“I LOVE this moment between Malik and Randall. I hate they have to bond over trauma in the news and being a Black male…but it's reality for most black people. #ThisIsUs,” one fan commented on Twitter.

Brown’s character also has an explosive conversation with Metz’s character, who proudly boasts that her son was going to his “first protest” — and then asks what Black organizations she should donate to rather than do her own research.

Randall struggles in these scenes to explain that the recent events of police brutality weren’t new.

"‘I’m exhausted.’ Oh Randall, you speak for so many of us with close friends of other races, who mean well but don’t want to ‘say the wrong thing.’ #ThisIsUs is speaking TRUTH tonight. Well done, @ThisIsUsWriters,” one fan said of that scene.

Another said, “Randall may have given that speech to Kate for himself but i think he was speaking for all black people. We are exhausted #ThisIsUs.”

Randall later fired his White therapist in favor of seeking a Black therapist to deal with his trauma.

"I'm not falling apart. I'm not having a breakdown. I'm just really, really sad," he told his wife, Beth [Susan Kelechi Watson] at the end of the show. In response, she said, "This pain is not forever."

Brown’s performance garnered a lot of attention from fans who declared he was the best actor in the series and deserved an award for the intense roller coaster premiere.

Another fan tweeted, “Sterling K Brown should win all of the awards. #ThisIsUs.”

“Give Sterling K. Brown his flowers!!!!! What a powerful performance. Thank you for bringing us something good in 2020. #thisisus #SterlingKBrown,” a fan said.

Another wrote, “Sterling K Brown can act his a– off. BUT I remember him posting about how this affected him. All of it. Tears. Emotions. Anxiety. So I know it's REAL from him. #ThisIsUs.”

“sterling k. brown was freaking brillaint [sic] throughout the entire premiere!! randall's exhaustion with what's going around the world while dealing with his past, was terrifically portrayed by sterling. what fine actor!! #ThisIsUs,” a fan tweeted.

Another person said, “Sterling K Brown CARRIES This is Us … the writers are obviously amazing, but the emotion this man brings to the show … unmatched.”

“I say this every season, Sterling K Brown makes this show. Idc what anyone has to say #ThisIsUs,” one fan said adding, “‘This is Us’ should've been called ‘This is Randall’ because what's the show without Randall and his family? #ThisIsUs.”