The girl who captured George Floyd‘s killing by Minneapolis PD officers on video is getting through the trauma of the ordeal thanks to therapy and a change of scenery, while remaining an important part of the case … TMZ has learned.

We broke the story … 17-year-old Darnella Frazier says she’s utterly traumatized after recording the incident in which officer Derek Chauvin used his knee to suffocate George, largely because she’s been the target of unfair criticism and backlash since the video got released. 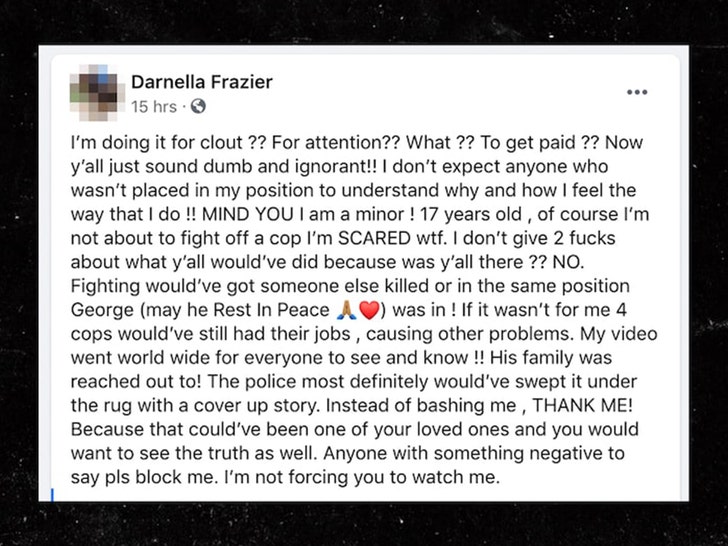 She’s also been facing a media frenzy — dealing with reporters and an onslaught of attention — and, of course, there’s the trauma of just witnessing George’s death firsthand.

Darnella’s attorney, Seth B. Cobin, tells us that she and her family are no longer staying at her house in South Minneapolis, which is literally around the corner from the scene where Floyd was brutally killed.

We’re told the family decided to relocate to an undisclosed spot — police were not involved — to remove themselves from the constant attention and strangers coming to their door.

Darnella’s neighborhood has understandably become a flashpoint for Minneapolis protests, so the family felt it was best to get away from that for now.

Cobin tells us Darnella’s also begun seeing a therapist who specializes in trauma, and it’s working for her. Otherwise, she’s keeping her mind busy with her school work.

As for her role in Floyd’s murder case … Darnella — along with her mother and Attorney Cobin — met with investigators from the FBI Civil Rights Divison and Minnesota Bureau of Criminal Apprehension on Saturday to give them her statement.

Cobin says it was a very important step for them to speak to the main witness, and Darnella is doing her part. Cobin says, “It’s not an easy story to tell. You’re going back to that place in your head and that’s not an easy way to go back. It was emotional for her to recount her story, and for all of us to hear it.”

Darnella’s phone was taken to a crime lab so they can extract the original video and use it as evidence in Chauvin’s trial. We’re told investigators are trying to get in touch with other witnesses seen or heard in her video, as well.

For all that she’s been through, a GoFundMe campaign’s been started to help Darnella get some peace and healing … it’s raised nearly $50k in 2 days.