The girl who captured the death of George Floyd at the hands of Minneapolis police on video is not in a good space right now … and it’s all because of hate she’s receiving online.

17-year-old Darnella Frazier tells TMZ … she is utterly traumatized after recording the officer using his knee to suffocate George. Odd as it might sound, Darnella tells us a lot of people have criticized her for doing nothing more than shoot the encounter.

She says people on social media are telling her she should have done more to help George, like physically step in and intervene. While that emotion might be understandable, it’s not really a practical notion for an African-American teenager. 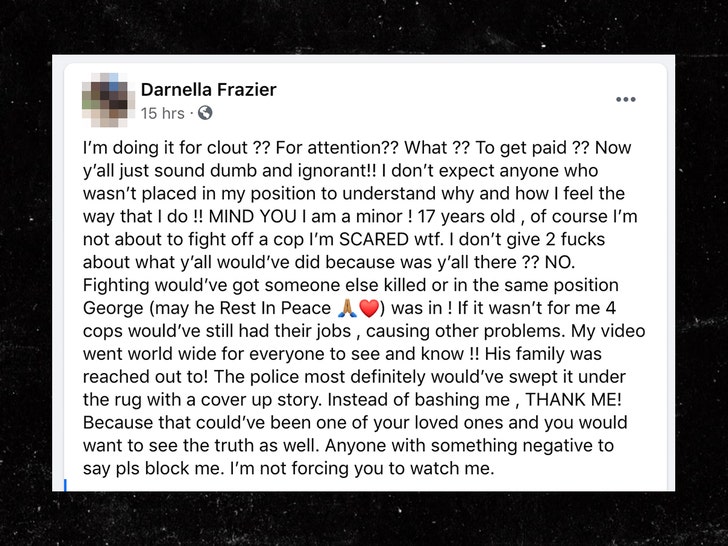 Not just that, but folks are accusing Darnella of only posting the video for “clout” or attention, and possibly a payoff. She’s vehemently refuted that.

She’s also been facing a media frenzy surrounding her video — dealing with reporters, and an onslaught of attention. And, of course, just witnessing George’s death first-hand has scarred her as well, we’re told.

Darnella’s mother tells us her daughter was simply out making a store run, and never should have experienced this, including the nasty aftermath. She’s concerned going forward because she says Darnella already suffers from social anxiety.

However, Mom believes her daughter was where she needed to be — in order to capture the tragic event and share it with the world. To that point, without Darnella’s video, we might not know what really happened.

As for those saying she should have done more. Keep in mind, she and several others on the scene shouted for several minutes at the officers … pleading with them that George was dying.

The fact is … Darnella’s video could ultimately be the evidence that brings George’s killer to justice. Internet trolls should think about that before attacking a teenage girl.