We have finally made it to the end of American Horror Story: Apocalypse, and fans got their first glimpse at the season finale in the foreboding trailer that premiered after Wednesday night’s latest episode. Of course, the big question is how all of the loose ends of this season will possibly be tied up in just one episode, but the AHS: Apocalypse finale trailer is packed with so many twists and turns that the episode is sure to finally connect all the dots.

Spoiler alert: This post will discuss plot points up to and through Episode 9 of American Horror Story: Apocalypse, "Fire and Reign." In its penultimate episode, AHS: Apocalypse continued to remain in its lengthy, pre-apocalyptic flashback that has been going on for more than half the season now, but the season finale promo trailer shows that we will finally snap back to the post-apocalyptic future that began the season in next week’s final episode.

When last we saw the Outpost 3 timeline in Episode 4, Cordelia Goode, Myrtle Snow, and Madison Montgomery had strolled into the bunker and resurrected their sister-witches Coco St. Pierre Vanderbilt, Dinah Stevens, and Mallory. Before the show launched into its flashback, the six witches were preparing to enter battle with Michael Langdon and his robotic henchman Miss Mead. Now, we are finally going to see that battle play out in the season finale. Check out the teaser trailer for the finale episode, and then we can break down all the most important details:

The first image in the promo trailer may look like it is teasing the rise of nuclear zombies or something like that, but if you take a closer look you will realize that those hands jutting up from the ground are familiar. The scene is actually Cordelia, Myrtle, and Madison coming back to like, most likely thanks to the mystical, life-giving properties of the mud surrounding Misty Day’s shack. Ryan Murphy even shared a photo of the three witches covered in dirt to verify those hand in the ground belong to the surviving witches.

Next, we hear Cordelia spell out her plan for saving the world, which confusingly involves allowing the nuclear apocalypse to happen. We also see Cordelia blowing some dust at the end of the teaser. This is likely when Cordelia will also explain her reasoning behind the identity spells that erased Coco, Mallory, and Dinah’s memories.

But the most exciting scene of the trailer comes in the middle. In it, we see Michael Langdon declare that he loves "a good witch fight" as Dinah Stevens looks worried. And she should be worried, because it appears as though Angela Bassett’s voodoo queen Marie Laveau is indeed back, just as she was rumored to be. Although we only see Marie’s back, Ryan Murphy posted a photo of Bassett when the trailer dropped to make her return even more clear. 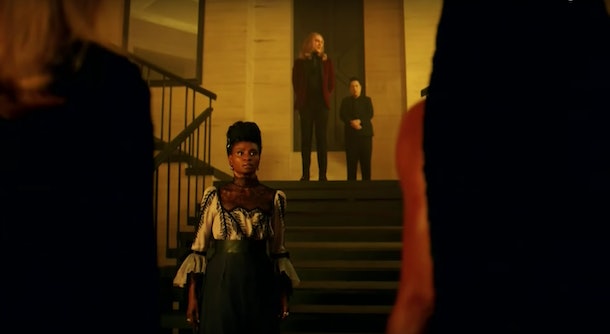 The other witch appears to be Cordelia, and they are probably upset with Dinah after finding out that she is the one who cast a spell to allow Michael to enter Miss Robichaux’s Academy and kill Zoe and Queenie.

The trailer also teases that we will see Mallory use her newly revealed power of time travel, which is likely the crux of Cordelia’s master plan to save the world from the apocalypse.

The season finale of American Horror Story: Apocalypse will air on Wednesday, Nov. 14 at 10 p.m. ET on FX.