A Wolf Of Wall Street wannabe, a ‘mumpreneur’ and nut milk connoisseur are among the 16 candidates taking part in the new series of The Apprentice.

This year’s line-up of contestants on the BBC One show includes eight women and eight men from a wide variety of business backgrounds, including IT, fashion design, law and tree surgery.

They will be competing to win a life-changing £250,000 investment for their business, and the chance to have Lord Sugar as their business partner. 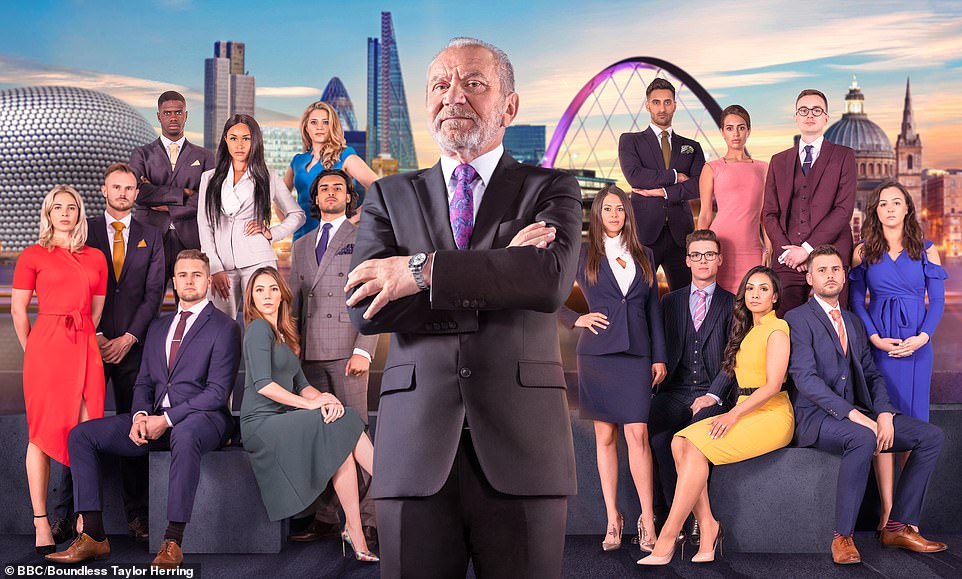 David Alden, from East Yorkshire, says his friends and family have nicknamed him the Duracell bunny as he can ‘take on so much and never stop’ in his role as a tax adviser.

‘Mumpreneur’ Khadija Kalifa, who has run her own eco-friendly cleaning business for the past three years, said she hopes to be likeable but can be cut-throat when necessary.

‘Whatever I say I’m going to make happen happens,’ she said.

MEET THE CONTESTANTS: THE GIRLS 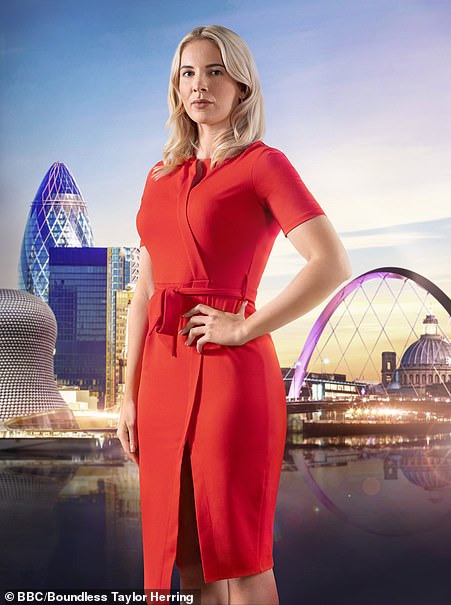 Key information: Camilla says she is an adrenaline junkie and loves to try anything new and exciting. She believes her people skills are her biggest strength, although feels her openness and willingness to overshare can sometimes work against her.

She says: ‘I’m a bundle of energy and creativity and certainly a one off… ain’t no Vanilla Camilla’ 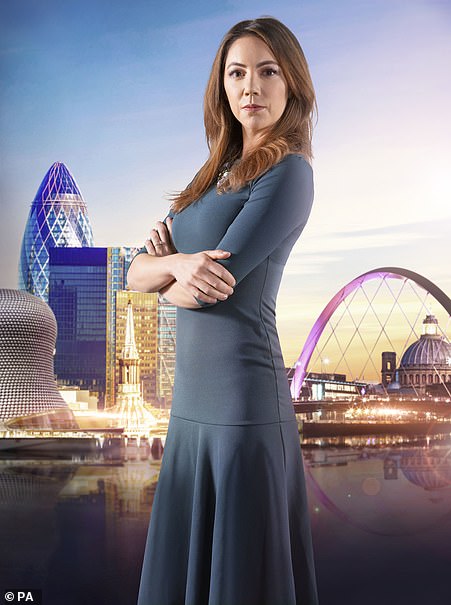 Key information: Having sold her company in 2016 and published a business book in 2017, Jackie says she is a trailblazer within the sponsorship industry and wider business community and credits her success to her positive attitude. She admits she can be very opinionated and isn’t good at taking criticism, but hopes her commercial mind will see her through the process.

She says: ‘I’m not intimidated by anybody, or anything.’ 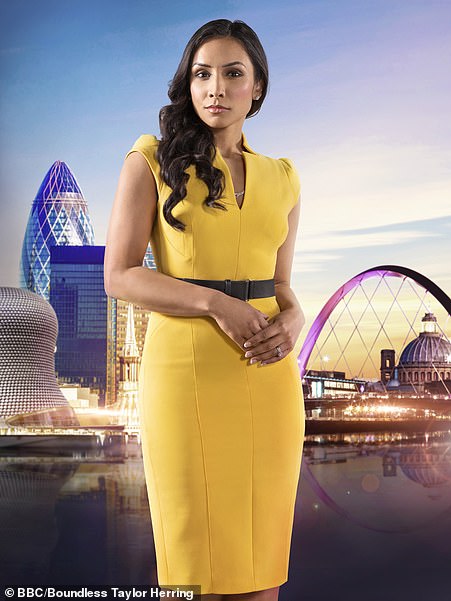 Key information: Jasmine has built her career on training others to better themselves and develop their skills and says that she loves enabling and empowering people. She credits American philanthropist and life coach Tony Robbins as her role model and admires how he has built a global empire and success whilst also improving people’s lives.

She says: ‘All is fair in love and war…and business is war.’ 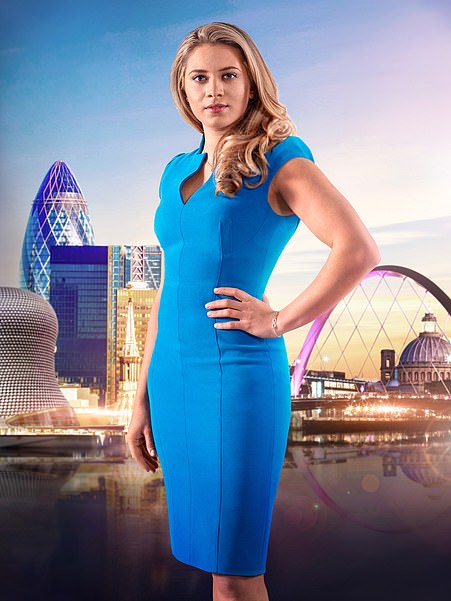 Key information: Sabrina has had her eye on making money from the age of 14, when she set up a business selling retro sweets as part of a Young Enterprise Scheme. She cites Emma Watson as one of her role models because she’s ‘always clear-headed and makes good decisions’

She says: ‘I am a mix of Willy Wonka drinking an espresso martini… classy and sophisticated on the outside; inside, a little bit crazy and wacky but full of brilliant ideas.’ 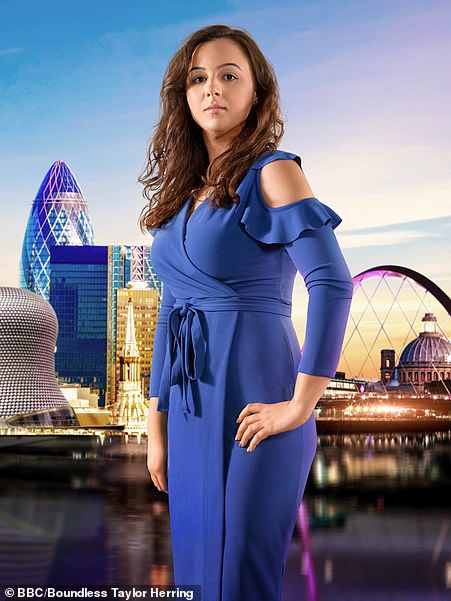 Key information: Having run her own eco-friendly cleaning business for the past three years, Khadija considers her people skills to be her best business asset. She says her friends would describe her as being quick-witted, motivational and genuinely wanting to help others but she can have a bit of a ‘hot head’.

She says: ‘Whatever I say I’m going to make happen happens. I’m a serious mumpreneur who doesn’t have time for timewasters and idiocy.’ 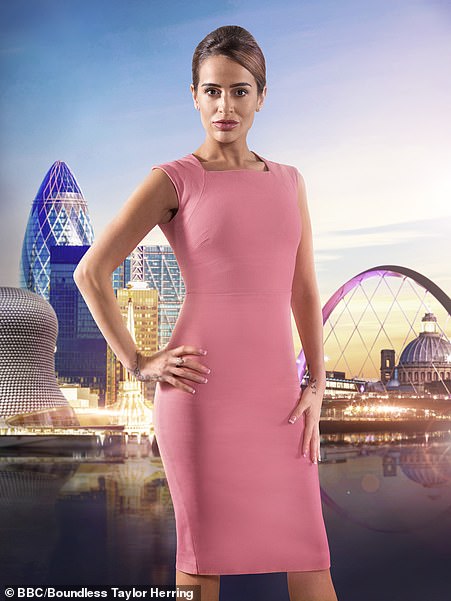 Key information: Sarah owns and runs an acting academy for children. She says she wants to be a role model to her young daughter and hopes her hard work and life experience will aid her in the process. She admits she’s not good with business terminology and is angered by people in business who turn their noses up at the working-class demographic.

She says: ‘I am me, I don’t have a posh accent or pretend to be anyone else. My personality sells me, my passion to succeed and work ethic.’ 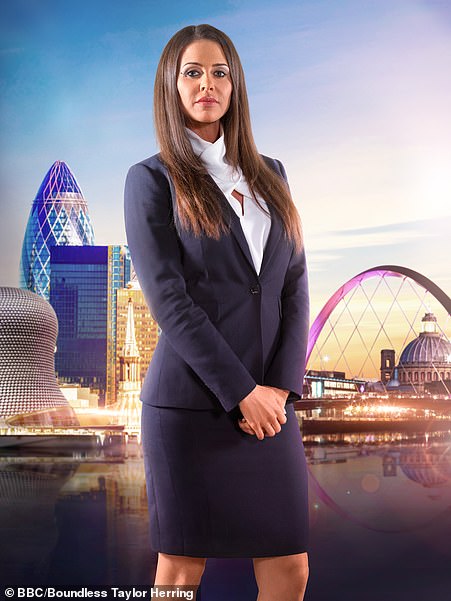 Key information: Alongside her role as director at a law firm, Sarah Ann has also run her own nursery furniture business since 2016. Although she says timekeeping and organisation aren’t her greatest strengths, Sarah Ann believes her loyalty, commitment and ability to remain calm under pressure are her best qualities. 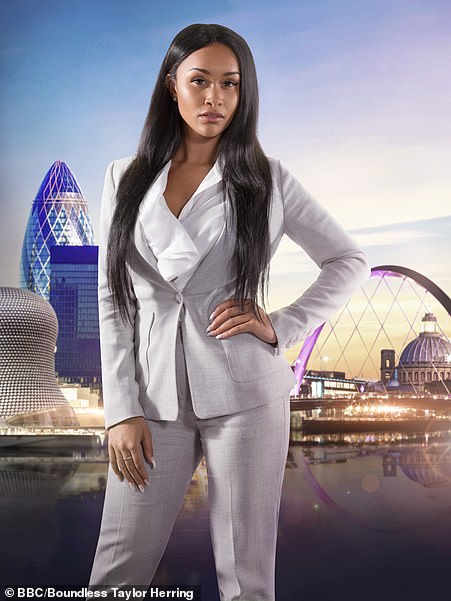 Key information: Sian owns and runs a swimwear fashion brand, with clients including celebrities and celebrity stylists. She identifies with Coco Chanel as a role model in business, as she ‘came from nothing and worked her way to the top’. She believes she has been raised to win and every task will see her being calculated, collaborative and ruthless where necessary.

She says: ‘I bring both the passion and the fire – in the boardroom, I will be merciless.’

One contestant, Daniel Elahi, 28, likens himself to Jordan Belfort, the main character in The Wolf Of Wall Street film, because of his entrepreneurial skills and lavish party lifestyle.

Business owner Camilla Ainsworth, 22, is a self-confessed adrenaline junkie who loves to try anything new and exciting – from skydiving to swimming with sharks.

‘I’m a bundle of energy and creativity and certainly a one off… ain’t no Vanilla Camilla,’ she said.

This year Lord Sugar ups the ante from the start of the series and tells the candidates to ‘expect the unexpected’.

The business tycoon sends the candidates to Malta straight after the first boardroom, warning them: ‘Remember, this is NOT a holiday.’ While there, they are tasked with buying nine items at the lowest possible prices.

Lord Sugar will also be sending the candidates to Glasgow to sell art, to Birmingham to clinch deals at a Body Building Expo and back to London to launch a budget airline.

The businessman will be joined once again by aides Baroness Karren Brady and Claude Littner, who will be his eyes and ears on the tasks.

Comedian Rhod Gilbert resumes his role at the helm of sister show You’re Fired, airing each week on BBC2 straight after the main show.

MEET THE CONTESTANTS: THE MEN 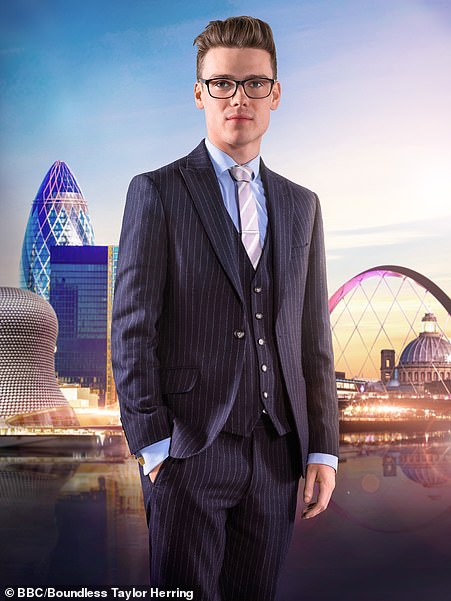 Key information: Alex believes his “gift of the gab” is his best skill but admits he can sometimes be too headstrong. He says his role models are his grandfather – who invented the Finn Chocolate Coater, a machine to coat chocolate bars and biscuits – and Elon Musk.

He says: ‘I know everything. Call me Google… it’s my middle name.’ 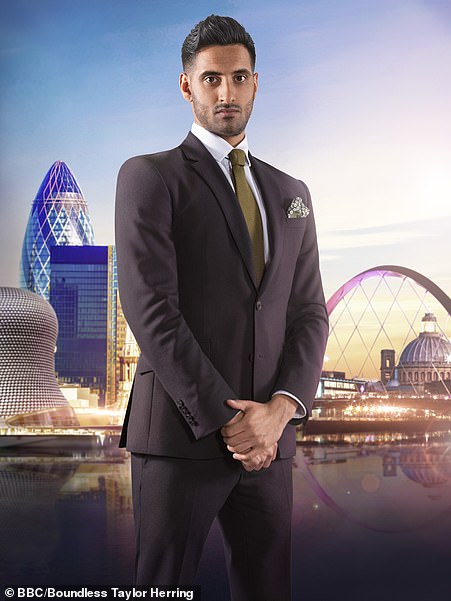 Key information: Daniel set up his business in 2017 and likens himself to Jordan Belfort, the main character in The Wolf Of Wall Street film, because of his entrepreneurial skills and lavish party lifestyle.

He says: ‘I have the beauty and the brains, typically people only have one. I was blessed with both in abundance.’ 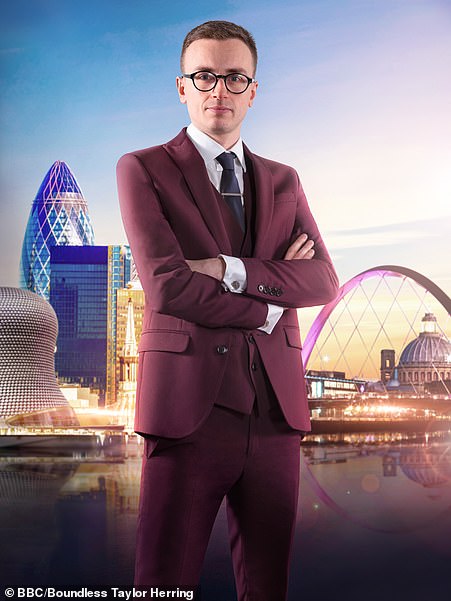 Key information: David claims he can speak to anyone about anything, though he gets frustrated when others don’t share his unwavering positivity. He also says being too trusting has been his downfall in the past.

He says: ‘My friends and family call me the Duracell bunny as I take on so much and never stop. I just keep going.’ 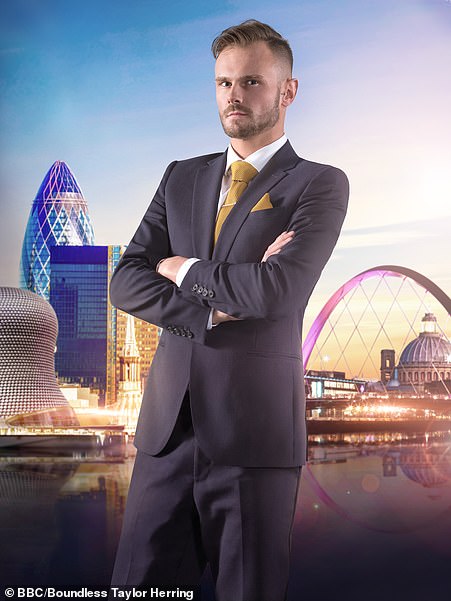 Key information:  He claims to use charisma and charm for negotiating and building morale within a group. He says he can be brutal when he needs to be and does not stand for people who are lazy or shirk responsibility.

He says: ‘There’s no need to watch your back when I’m already two steps in front.’ 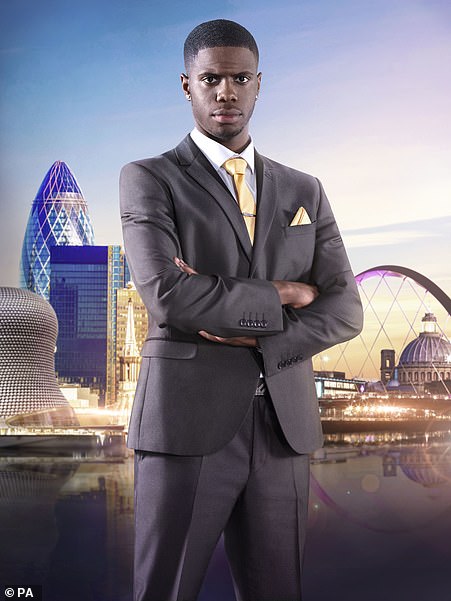 Key information: Kayode delivers talks to inspire young people all over the country. Brimming with ideas, he throws himself into new ventures and believes his positive personality and natural likeability will lead to success in the boardroom.

He says: ‘I’m not here to razzle dazzle and hit you with buzzwords like ‘I’m so motivated, passionate’… anyone can say those things and I’m not anyone, I’m Kayode Damali. If you’re not your own biggest fan, who do you expect to be it for you?’ 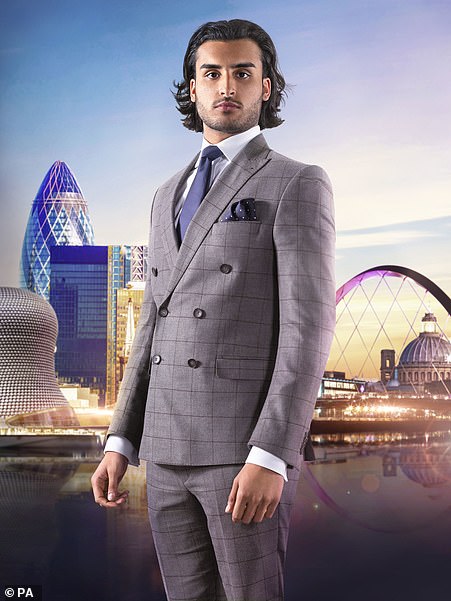 Key information: Kurran believes he has a keen creative eye and is confident he will cope well with “managing egos”. He is inspired in business by his father who started his own airline. Kurran gets irked by people who are out for themselves rather than working collectively for the team and gets especially rattled by people who lie.

He says: ‘I’ll be honest, I don’t eat, sleep, breathe business but I do eat, sleep and breathe success.’ 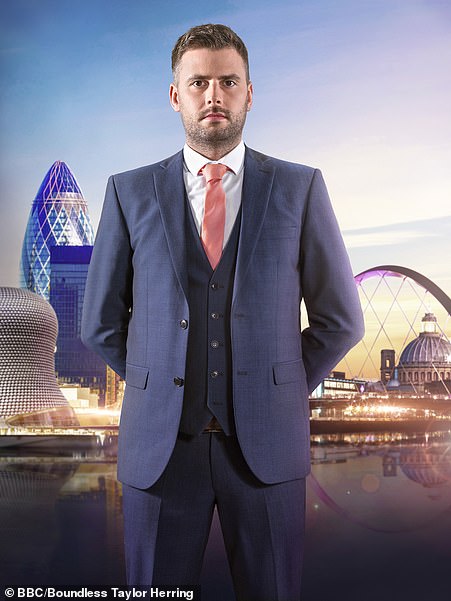 Key information: Rick says one of his best qualities is his confidence and assertiveness and that being able to separate business from pleasure means he is good at getting the best from others. He believes befriending all the contestants will set him in good stead but warns he is a ‘wolf in sheep’s clothing’ and will use this to his advantage.

He says: ‘I won’t pussyfoot and waste time, as time is of the essence in everything. People will have to like it or lump it.’ 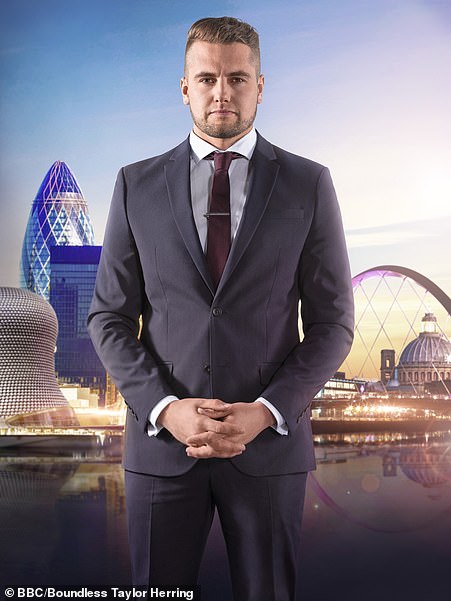 Key information: Having struggled at school, Tom now runs a successful arboricultural (tree care) business. He says he is drawn to situations that intimidate him and believes he can rise to any challenge.

He says: ‘There are very few people that can genuinely say they’re going to make it – but I know that I’m going to.’

Two special episodes, The Final Five and Why I Fired Them, will also return to reveal the stories behind the series.

The Final Five shares the journey of the five strongest candidates, just before they battle it out to secure their place in the final. As the series reaches its climax, Lord Sugar will reveal further insight into his boardroom decisions in Why I Fired Them.

Fans will also be able to keep up to date with Apprentice news on social media, including the programme’s new Instagram channel.

The Apprentice will air weekly on Wednesdays at 9pm on BBC One from October 3, followed by You’re Fired at 10pm on BBC Two. Viewers can watch live and on-demand on BBC iPlayer.