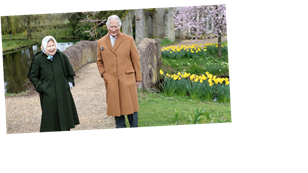 The Queen, 94, and Prince Charles, 72, beam in new picture taken in blossoming garden at Frogmore House

The Queen and Prince Charles look the vision of spring as they pose in the blossoming gardens at Windsor ahead of Easter Sunday.

The beautifully-candid pictures, released today by Buckingham Palace, shows Her Majesty and the Prince of Wales in the blossoming garden of Frogmore House, Windsor, surrounded by vibrant daffodils.

The monarch, 94, appeared in high spirits as she was pictured laughing alongside her eldest child with her hands tucked into the pockets of her dark green cape coat.

Looking set for spring, Queen Elizabeth II wore her signature cream headscarf and blue mittens, as she posed in front of a quaint humpback bridge.

Meanwhile Prince Charles, 72, beamed as he stood with his mother and wore a beige overcoat with a pale blue shirt and tie against the backdrop of a stunning pink blossom tree.

The pictures of Her Majesty and Prince Charles were taken last month on March 23rd which also marked a year since Prime Minister Boris Johnson told the nation to stay at home under Covid-19 lockdown restrictions.

In the run-up to Easter, Her Majesty has also written to 190 Maundy Recipients who have been sent traditional purses of "specially-minted coins" after the traditional Royal Maundy Service on Thursday could not go ahead with coronavirus restrictions.

The Maundy Service typically takes place on the Thursday before Easter Sunday and sees the Queen distribute Maundy money to local pensioners at cathedrals and abbeys across the country.

The official Royal Family Instagram shared a beautiful clip of daffodils blowing in the wind in The Green Park alongside a letter signed by Her Majesty to the recipients, captioned: "Wishing our followers a peaceful Easter Weekend."

It comes after the Queen made her first public appearance in five months last Wednesday, at a ceremony commemorating the Centenary of the Royal Australian Air Force. The outing also marked the first time she had been seen out in public since her grandson Prince Harry sat down for his bombshell interview with Oprah Winfrey alongside his wife Meghan Markle.

Her Majesty looked very happy to attend the CWGC Air Forces Memorial in Runnymede to mark the Centenary.

She was greeted by the Director General of the Commonwealth War Grave Commission, Claire Horton, and High Commissioner for Australia, The Honourable George Brandis.

This month, The Queen will also celebrate her grandson Prince William's 10th wedding anniversary with Kate Middleton, and is set to mark the occasion in a special way.

Royal expert Duncan Larcombe told OK! magazine: "I think it's highly likely she'll be planning something to honour Kate's 10 years in the royal family. Something she can do to mark it.

"Kate and the Queen have a fantastic relationship. Kate strikes that balance between bowing to her as the head of the royal family in public but being able to check in with her as the great grandmother to her children. She has her own direct line to the queen."

According to the expert, it was Kate who taught the queen to use Zoom during the coronavirus pandemic, meaning she has been able to conduct virtual meetings.

"They've stayed in touch over video calls," Duncan explained, "Kate will check in on the Queen and give her updates on the children. But also lean on her for advice."

Kate and William recently visited their wedding venue, Westminster Abbey, which has now been turned into a vaccination centre to aid the effort against coronavirus.

The poignant visit saw the couple recreate their walk down the aisle ten years on, with fans comparing pictures from the day to their royal wedding on 29th April 2011.