Pixar’s latest fare Soul was, like everyone expected, a tear-jerker to the extreme. The story follows Joe (Jamie Foxx), a middle-school band teacher whose true passion is jazz – and he’s good – but on his way to a life-changing gig, he falls down a manhole and finds himself on the cosmic elevator to The Great Beyond.

Joe isn’t ready to give up life yet and escapes to The Great Before instead, a fantastical realm where every soul gets their personalities before they head to Earth. He’s soon teamed up with sarcastic soul 22 (Tina Fey) who has no desire to go to Earth, so Joe thinks he spots an opportunity to return there.

But as Joe joins forces with 22 to help them both get what they want, he starts to reassess his own life too and may just discover the answers to some of life’s biggest questions, like what it means to have soul. It’s a story that fits thematically with Pixar’s oeuvre, but one fan theory draws it even closer to its fellow Pixar flicks.

Not long ago, Pixar seemingly confirmed that yes, all of its films take place within a shared universe. There is, of course, the famous theory by Jon Negroni that explains how they aren’t only part of the same universe, but actually connected by an overarching plot.

For the purposes of this Soul theory, however, we’re only talking about the shared universe theory – that all the films exist in the same world. One Pixar fan on Reddit has explained that when souls leave The Great Before for Earth, they don’t necessarily wind up in a human’s body.

The Great Before is where souls come from. They’re paired with ‘mentor’ souls of great figures who have died (like Archimedes) and once the mentor has helped some baby souls get their spark, they can go to The Great Beyond while the newly-sparked baby souls go to Earth.

All souls look effectively the same (blue and glow-y), but in the case of mentor souls or souls headed for The Great Beyond, they’ve conformed to the shape of their host. So Joe’s soul looks like Joe, but 22 – a soul that refuses to go to Earth – is just a vague blobby shape.

The Redditor suggests there are likely some souls that are ready to be animal souls. Perhaps these souls need something different to create their spark, which makes them the ‘regular’ animals that exist in other Pixar films. 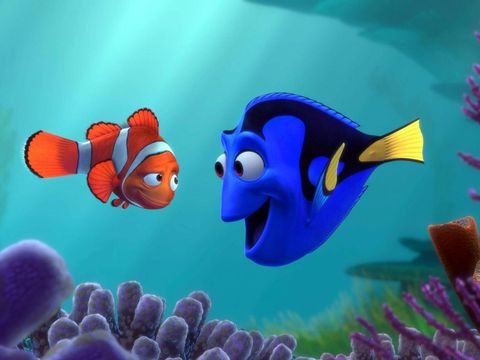 But some souls with great sparks wind up in animals too. This would go a long way to explaining how a rat can be a Michelin starred chef and how a fish can have deep existential crises about the death of its mother.

Of course, there’s no proof of this (yet) but it’s a sweet thought that further ties the films of Pixar’s canon together. And lucky for you, you can watch them all on Disney+.