Tristan Thompson and Lamar Odom both have a lot in common. Both are pro basketball stars, and, of course, both had serious relationships with Khloé Kardashian.

Odom famously enjoyed a whirlwind romance with Khloé that saw them tie the knot in September 2019 after only a month of dating. The two seemed to have a fairytale romance that fans saw play out on “Keeping Up with the Kardashians” and their spinoff, “Khloe & Lamar,” but things began to crumble when Odom was accused of cheating.

Khloé filed for divorce in 2015, but the two actually stayed together much longer. Khloé quite literally stood by Odom’s side following a near fatal overdose but went on to file for divorce for a second time in May 2016, which was finalized that December.

As for Thompson, he and Khloé first sparked dating rumors back in September 2016 when they were spotted out and about together. Things began to get serious for the couple as they proudly put their PDA on display on social media, and it was a year later that it was revealed the loved-up were expecting their first child together. They welcomed daughter True in April 2018 — the same month Thompson was slapped with his first batch of cheating allegations. They were on and off for the next three years, before eventually calling it quits around June.

But what’s got Thompson hot under the collar when it comes to Odom? And how is Khloé involved? Read on for the details. 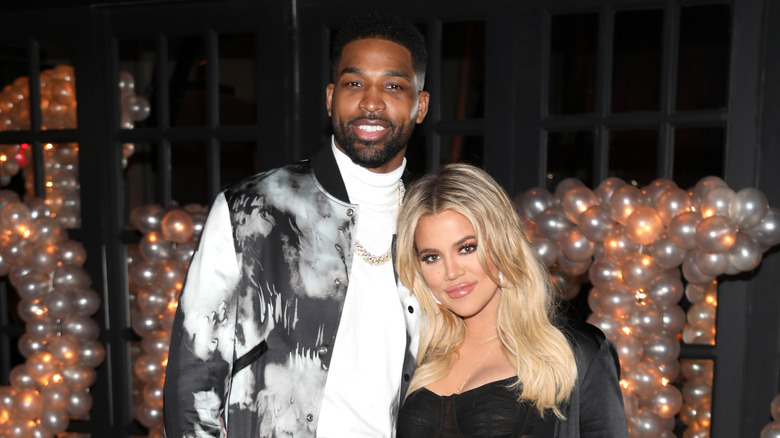 It’s probably not surprising to hear Khloé Kardashian is at the center of the drama between Tristan Thompson and Lamar Odom. It all went down on July 9 after Khloé posted a sizzling bikini photo to Instagram while showering outdoors.

Her first ex to realize what he’s missing was Odom, who commented, “Hottie” alongside two fire, two heart eye, a red heart, and two smiley faces surrounded by hearts emoji. A few hours later, Thompson chimed in, commenting with two red hearts and two drooling faces (via Comments By Celebs).

Thompson then realized Khloé’s other ex was still drooling over her. And he wasn’t happy. The athlete appeared to threaten Odom, tagging him and writing, “God brought you back the first time. Play if you want, different results” with two shrugging emoji. Thompson appeared to reference Odom’s 2015 overdose, which saw him almost lose his life.

Khloé is yet to publicly respond to the beef going down on her page, though Odom’s comment came shortly after he admitted he missed the Kardashian clan “immensely.”

“Unfortunately… due to my behavior and some bad decisions, we don’t really talk any longer,” he told Andy Cohen in May on “Radio Andy.” “We have to live with the decisions that we make and then, hopefully, in time, people heal and [will] be able to forgive me.”