Julia Bradbury has described the prominent veins on her legs as ‘quite ugly’, and said she has regular treatments to make them disappear

Posing naked on top of a sea of discarded bottles to highlight Britain’s plastic waste problem, Julia Bradbury appears to be completely confident with her body.

But the TV presenter revealed she has one particular body hang-up that makes her feel uncomfortable in skirts and dresses.

She has described the prominent veins on her legs as ‘quite ugly’, and said she has regular treatments to make them disappear.

The mother of three, 47, developed varicose veins during pregnancy due to raised blood pressure and has also had thread veins since her 20s.

The former Countryfile presenter, 47, told the Mail: ‘[I got them] from my lovely Dad who I inherited lots of things from.

‘He’s very tall, so I got his height and he’s the one who took me walking in the outdoors so I got my appreciation of nature from him as well. But one of the bummer sides is the thread veins, that’s the downside.’

Thread veins are tiny blood vessels close to the surface of the skin. They look like fine red wiggly lines. Varicose veins, meanwhile, are swollen and enlarged, often appearing bulging or twisted.

In healthy veins, blood is prevented from flowing backwards by tiny valves. If these valves weaken or are damaged, blood can flow backwards and collect in the vein, eventually causing it to become swollen.

Fed up of their appearance, Miss Bradbury had laser therapy in 2016 to treat her varicose veins and now has a treatment called microsclerotherapy twice a year during summer for her thread veins.

Tackling thread veins with the treatment costs £360 per session, while the varicose procedure cost £1,995 for both legs.

The BBC star, who has three-year-old twin girls and a six-year-old son with partner Gerard Cunningham, 58, said of her hang-up: ‘It didn’t stop me going out, but it would certainly stop me wearing certain outfits and certain dresses and skirts.

‘There was a point where they were quite bad … it’s like the eye was drawn to the hem of the skirt and that happened to be right where I had a quite ugly cluster of veins.’ 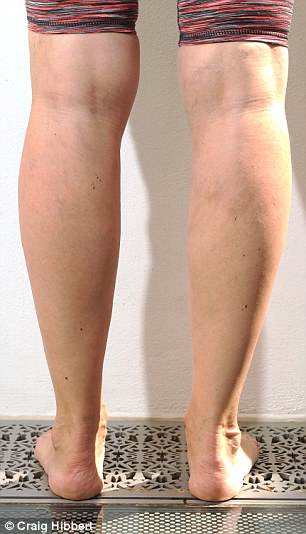 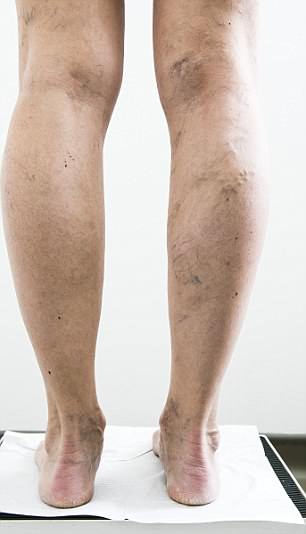 Tackling thread veins with the treatment costs £360 per session, while the varicose procedure cost £1,995 for both legs

Miss Bradbury tweeted pictures of her thread vein procedure last week with Dr David West at the Veincentre, a national chain of clinics where she also had her varicose veins treated.

Miss Bradbury, who backed the Daily Mail’s plastic campaign last week by posing on top of 750 plastic bottles, said: ‘In another six weeks I’ll go and see him again and that’ll be it for the summer.’

After her varicose treatment in 2016, she said she finally felt confident to wear skirts again, adding: ‘My legs feel smooth to the touch and I feel sure that this is a permanent solution to the problem that has plagued me for most of my adult life.’

The treatment for thread veins – which are very fine blood vessels just beneath the skin of the legs – is called microsclerotherapy.

It involves injecting small amounts of an irritant substance called a sclerosant into the veins after local anaesthetic is administered.

The lining of the vessels then sticks together, stopping blood from flowing. This destroys the veins and causes them to disappear over time.

Patients are advised to wear compression stockings for 15 days after the procedure so that blood does not return.

Before the treatment, patients have ultrasound scans to find out if there are underlying varicose veins that are feeding blood into the thread veins and keeping them open.

Multiple sessions are usually needed for the best results and it can take two to three months for the treatment to work. Thread veins can then return after several more months.