The royal wedding of Prince Harry and Meghan Markle, now officially known as the Duke and Duchess of Sussex, was filled with celebrities, family, tradition, and endless beautiful moments. The highly anticipated royal wedding is now marked forever in history, and thousands of fans and members of the public turned up to celebrate the royal affair. However, perhaps one of the most beautiful moments of the event was when the wedding choir sung "Stand By Me" inside the church walls, and, beautifully, the crowds outside St George’s Chapel at Windsor Castle decided to join in on the melody. This video of fans singing "Stand By Me" at the royal wedding is so emotional, but also truly marked one of the most moving moments of the day.

Was it just me or was it a little weird to hear such a modern song played for a royal wedding? That’s Meghan and Harry for you; they broke all kinds of royal traditions on their wedding day, including Meghan walking herself down the aisle, Megan not curtsying to the queen on her way out of the church, and the fact that the wedding ceremony was held on a Saturday instead of a day during the week. 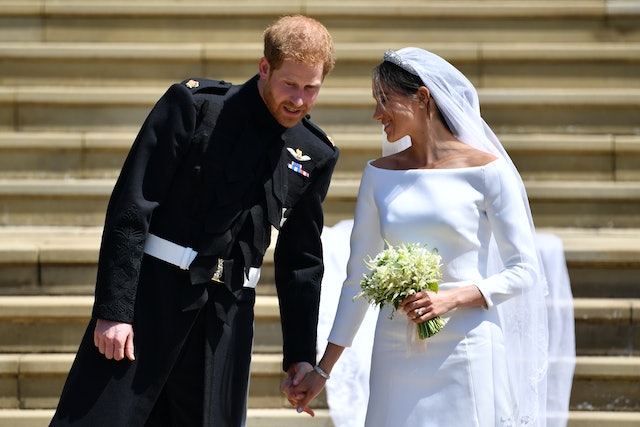 And just look at Meghan’s tiny bouquet. It definitely looks like something any bride would have, instead of the extravagant bouquets royals have donned in the past. I love that Meghan makes her own rules — even in a family that is, quite literally, built on rules.

The union of Meghan Markle, an American, and Prince Harry, one of the most famous and well-known public figures in the world represents so many things for so many different people. There’s the symbolic union of America and Britain; the more modernized take on the royal family in the 21st century; and, of course, there’s the blending of two people with two totally different backgrounds, namely the inspiration so many people will have from seeing a biracial woman join the predominately white royal family.

Meghan and Harry noted many times through Kensington Palace updates that they wanted the public to be a part of their special day. In addition to riding throughout the town in an open carriage so fans could catch a glimpse of them on the big day, the couple also invited members of the public on Windsor Castle grounds. The individuals who were invited for a closer look included people Harry and Meghan have worked with in charities, and some military veterans. According to Kensington Palace, over 2,000 people were invited inside the gates to be present outside of Windsor Castle.

It was truly a beautiful moment to see the crowd outside of Windsor participate in the song, which no doubt made them feel even closer to Meghan and Harry on their special day.

I’ll admit that I cried immediately upon seeing Meghan and her mother driving in their Rolls Royce on the way to the wedding, but by the time the choir joined together for their beautiful take on "Stand By Me," I was a blubbering mess. There’s just something about being a part of someone’s wedding that just makes me all melty inside. And that’s exactly what happened today on Harry and Meghan’s royal wedding day; the public truly did have the opportunity to join them in the celebration.

Congratulations to the Duke and Duchess of Sussex. Now Americans will always have a little place in the royal family, and we can thank Meghan Markle for connecting the two worlds on this special day.