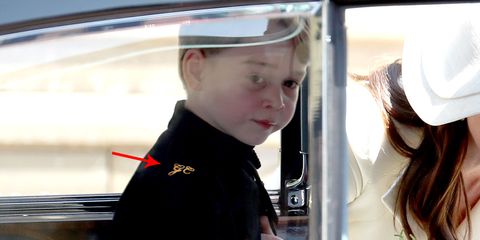 Prince Harry and Meghan Markle’s royal wedding outfits have just gone on display at Windsor Castle, where they tied the knot on May 19. Now, royal fans have the opportunity to see the bride’s stunning Givenchy gown and a replica of the groom’s uniform up close, along with commentary from the Duke and Duchess of Sussex themselves from an audio guide. The outfits of their famous page boy and bridesmaid duo, Prince George and Princess Charlotte, are also on display.

“We had 10 bridesmaids and page boys under the age of seven, which everybody says is impossible to have them behaving, but they did it!” Harry joked in the audio guide recording, People reports. “It was a miracle!” Meghan added.

Prince George looked quite dapper at Harry and Meghan’s ceremony, but if you closely, there’s a detail on his coat that you might’ve missed. His initials, GC, for George of Cambridge, were embroidered in gold thread on the shoulders.

The Palace did confirm that detail in a statement about the bridesmaids’ and page boys’ outfits on the day of the royal wedding. “As a special memento, each Page has their initials embroidered in gold on their shoulder straps,” the announcement read.

The five-year-old’s fellow page boys—Brian Mulroney, John Mulroney, and Jasper Dyer—also had their initials sewn onto the epaulettes of their jackets.

The monogram was actually Prince Harry’s idea, Meghan Markle revealed in the audio guide for the exhibit. “Such a beautiful keepsake for them,” she said, per People.

George’s sister, Princess Charlotte, also had a personalized detail in her outfit. Her initials and the date of the wedding were inscribed in the soles of her Aquazzura Mary Janes. On the big day, the three-year-old princess wore a white short-sleeve Givenchy bridesmaid dress with her monogrammed footwear.

The other bridesmaids had the same details on their soles, and they got to keep the pair as a souvenir. “The shoes are a gift from Ms. Markle to the young ladies as a keepsake of the special day,” the Palace previously said in a statement.

#NEWS: . The wedding outfits of the Duke and Duchess of Sussex go on display for the first time in the “A Royal Wedding: The Duke and Duchess of Sussex” exhibit at Windsor Castle on visitors will hear the couple themselves talk through every stage of their wedding planning via the exhibition’s audio guide. . Also on display are Prince George and Princess Charlotte’s adorable bridal outfits. Wearing an exact replica of Harry’s uniform, George has his initials “GC” for George Cambridge embroidered in gold thread on the epaulettes, which Meghan reveals was Harry’s idea. “Such a beautiful keepsake for them,” she says. . Princess Charlotte, who wore an ivory dress by Givenchy with shoes by Meghan’s go-to shoe designer Aquazurra, also had a personal touch on her outfit – the soles of her shoes are embroidered with her initials and the wedding date. . #katemiddleton #duchessofcambridge #dukeofcambridge #princewilliam #princegeorge #princesscharlotte #meghanmarkle #princeharry #dukeofsussex #duchessofsussexstyle