What we know about the upcoming ‘Friends’ reunion special 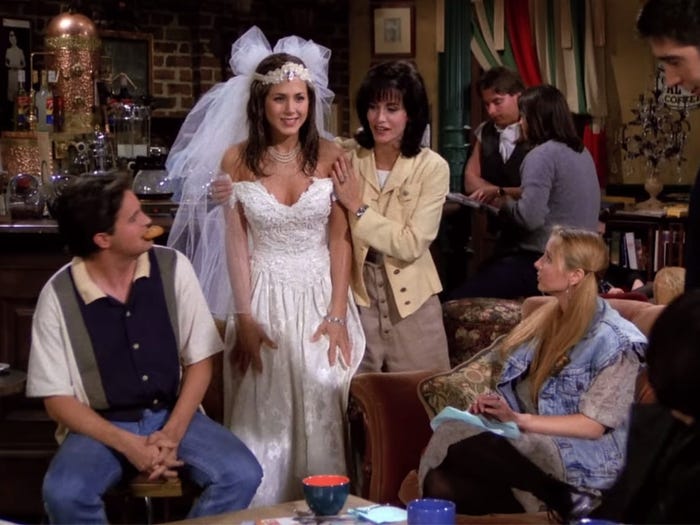 The stars of "Friends" are teaming up for a reunion special more than a decade after the beloved NBC sitcom ended.

"Friends" premiered in September 1994 and ended in May 2004 after 10 seasons. In February 2020, it was revealed that fans of the series will get to see the cast back together again for an unscripted special for HBO Max (a new streaming service).

Here's what we know about the "Friends" reunion.

The actors confirmed the reunion in February 2020 by sharing a photo that was used for their 1995 Rolling Stone cover. The stars will also serve as executive producers and will receive at least $2.5 million each, according to Variety.

The special will be filmed at Warner Bros. Studio's Stage 24 in Burbank, California, which is where the original series was taped.

In March 2020, multiple outlets reported that filming of the reunion has been pushed back to May due to the coronavirus pandemic, but it'll be ready for HBO Max's launch this year.

In mid-March, Cox told Jimmy Kimmel that they were supposed to film over the course of two days that month, but it got postponed due to the coronavirus pandemic. She said that prior to that, they spoke to the producer and had one meeting with everyone except for Schwimmer, who was in NY at the time.

The following month, it was revealed that the cast will be raising money for coronavirus relief efforts by letting one lucky winner and five guests attend the reunion taping once it's safe to do so.

The contest is part of the All In Challenge and fans can gain entry by donating money. The prize also includes coffee with the stars on the Central Perk set and tickets for the VIP ''Friends'' experience on the Warner Bros. Studio Tour.

In November 2020, Perry tweeted that the reunion is "being rescheduled for the beginning of March."

Cox said that as part of the reunion, the cast will reminisce about their time on 'Friends'

"The exciting thing is that we're all going to get together for the first time, in a room, and actually talk about the show," Cox said while appearing on an episode of Kevin Nealon's web series titled "Hiking With Kevin."

"We're going to have the best time," she added, explaining that the main cast only met up twice since the show ended. "It's going to be great. We really haven't all done that and actually sat there and talked about and reminisced about this incredible experience that we had."

The release date is unclear

The unscripted special is part of the programming for HBO Max, a new streaming service that launched in the US in May 2020. The streaming service costs $14.99 per month and includes every episode of "Friends," plus the highly-anticipated "Gossip Girl" reboot set for release in 2021.

The "Friends" special was supposed to be ready for release at the time of HBO Max's launch, but fans will have to wait a little longer for it. If the cast ends up filming the reunion in March 2021, it'll likely be released some time after that.