Who Is Ellie In ‘This Is Us’? Kate & Toby’s Potential Birth Mother Seems Promising

This Is Us stunned viewers in the Season 4 finale with the reveal of Hailey, Jack Jr.’s younger sister. Fans had a good reason to be shocked at the news, as Kate and Jack barely survived her giving birth the first time. How could there be a younger sibling? The answer, it seems, was adoption. Since it had gone so well for Kate’s parents with Randall, and for Randall and Beth with Deja, Toby and Kate decided they’d follow suit. But the process is a long one and involves many people. Could Ellie, who This Is Us introduced as Kate and Toby’s potential birth mother, in Season 5, Episode 3, end up being the most critical person in this journey?

Warning: Spoilers for This Is Us Season 5, Episode 3 follow. The This Is Us Season 5 premiere ended with the joyous news that Toby and Kate had been matched with a potential birth mother. In Episode 3, the two were super nervous as they geared up to meet her. (Kate was so flustered she put on the wrong face mask at the last minute for the meeting.) But so far, Ellie looks like a good match for Toby and Kate’s parenting style.

For one thing, she wore a Steelers mask for their first meeting. Even though they are in California, she comes from East Coasters, with parents who grew up outside of Pittsburgh. Also, she functions from the same set of cultural references as Kate and Toby do; her older child is named for Willow from the Buffy series. 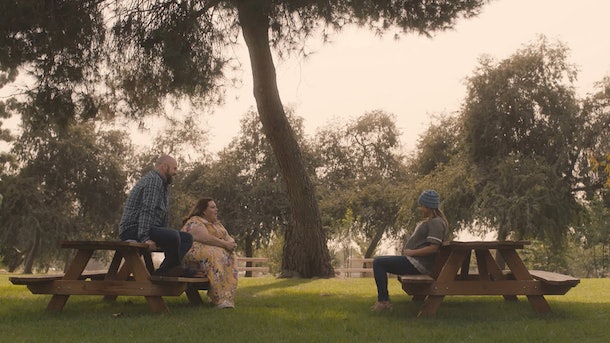 So why is Ellie looking to adopt out her second, as-yet-unborn child? It turns out, she’s a mother who has seen tragedy. Willow’s father, the love of Ellie’s life, died of cancer. After Ellie was pushed by friends to get out on the dating scene, she wound up having a one night stand. The resulting pregnancy is simply one she cannot emotionally or mentally afford.

Toby and Kate connected with Ellie immediately, and were determined to impress her. Despite their attempts to be on best behavior, however, a spat over diapers happened right in front of their potential birth mother. (Toby realized he never brought the new package of diapers into the house, despite Kate’s carefully orchestrated system.) And yet, Ellie seemed to recognize Kate and Toby are good-hearted people and could be precisely who her child needs.

Even with all the awkwardness, Kate and Ellie formed a rapport. After the meeting, Toby worried Kate was texting Ellie too much, fearing she’d bother the young woman, only to learn it was Ellie voluntarily texting Kate. It was looking like a great sign.

And yet, Kate and Toby still have a lot to think about. Raising one child is already hard. Can they handle two? Will Ellie let them handle two? Will they luck out with their first match, like Randall and Beth did with Deja? Or will Ellie decide it’s not the fit they’d hoped?

Fans will have to keep watching This Is Us on Tuesdays at 9 p.m. ET on NBC to find out.