Played by Richard Coyle, Father Blackwood first appears on Chilling Adventures of Sabrina at the end of the first episode, visiting the Spellman home as the Dark Lord’s representative on Earth. After Sabrina begins to doubt whether she wants to go through with her Dark Baptism and completely give up her mortal life, Father Blackwood is keen to convince her otherwise and welcome her as a full-time student at the Academy of Unseen Arts. Wary about the severity of the Dark Lord’s teachings and if she will still experience freedom as a full witch, Sabrina still isn’t sold on the idea.

However, as seen in one of Netflix’s first promotional photos for the series, Father Blackwood’s influence on the Spellmans does bring Sabrina to the site of her Dark Baptism on her sixteenth birthday. Sabrina’s aunts Hilda and Zelda are eager for her to accept her destiny and fulfill the family legacy, and while the first look photo hinted that she does, the series is quick to toss in a few complications at the event. Well, who said that being a teenage witch was simple? 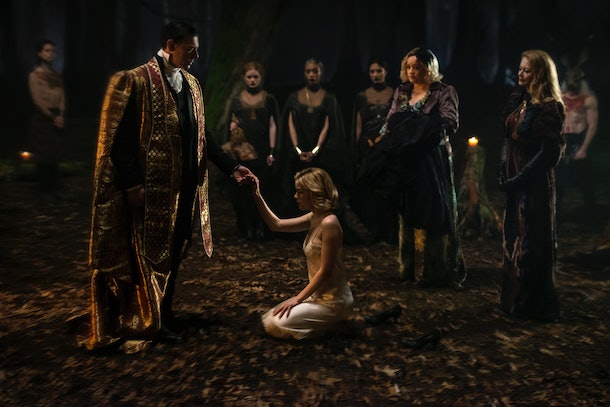 Seeing as Blackwood was her father’s mentor before Edward Spellman’s talents surpassed his own, the relationship between the High Priest and Sabrina is a little tense. Think of Harry Potter and Professor Dumbledore circa The Half-Blood Prince — there’s a level of understanding there, but Sabrina doesn’t exactly trust Blackwood, who has his own connection to another polarizing figure in Sabrina’s life.

While his character’s tie to the Spellmans will deepen as the story progresses, Coyle is entertaining himself with Blackwood’s elaborate costumes that may or may not be glorified curtains.

Known primarily for his work on British television, Coyle has previously appeared in several episodes of the USA Network series Covert Affairs, as well as films such as W.E. and Prince of Persia: The Sands of Time. He isn’t the only Chilling Adventures of Sabrina actor from the other side of the pond, either. Michelle Gomez, playing Ms. Wardell, is Scottish, while English actors Lucy Davis and Chance Perdomo appear as Aunt Hilda and Sabrina’s warlock cousin Ambrose. Basically, it seems that in the world of Sabrina, magical folk are low-key either American or English.

While he initially comes across as a threat to Sabrina at the beginning of the season, Father Blackwood’s storyline definitely isn’t as black-and-white as it appears. Keep an eye on him, witches. Season 1 of Chilling Adventures of Sabrina is currently streaming on Netflix.