Why DID Sue Perkins give Anna Richardson the Great British brush off?

Why DID Sue Perkins give Anna Richardson the Great British brush off? The end of this TV power couple has not taken anyone totally by surprise, writes ALISON BOSHOFF

Sue Perkins was asked in an interview in 2018 who, or what, was the greatest love of her life. Her answer? ‘A goofy Lithuanian called Melanie.’

This, of course, is Mel Giedroyc, whom she met while they were students at Cambridge University.

Giedroyc was her partner in comedy stand-up for decades before they achieved mainstream fame as the presenters of the phenomenally successful The Great British Bake Off, then on the BBC. 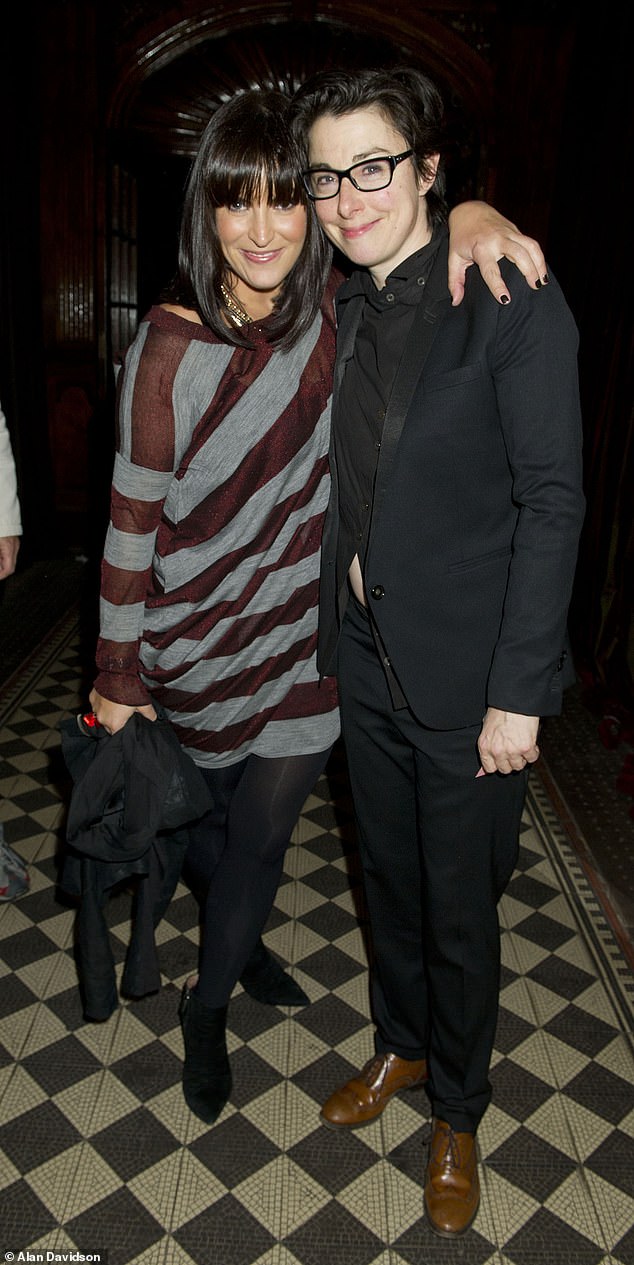 The romance with Richardson blossomed in 2013, after a Halloween party. Anna Richardson had recently separated from Charles Martin, her film director partner of 18 years. She had known Sue Perkins for years, but when they met again at a party an attraction was awakened

It’s notable, though, that she didn’t choose Anna Richardson, 50, the TV presenter.

By then they had been in a romance for five years, but it was Mel, and not Anna, who was accorded the honour of being the love of her life.

Some time later, in an interview in 2020, she was again notably circumspect about Richardson, whom she was living with in a large house in North London.

She spoke about ‘the most precious thing in the world’ to her, which was the safe progress of her sister’s pregnancy, and not her girlfriend.

Anna, and her role in Sue’s life, were relegated to a brief, not entirely positive, mention — she recounted how Richardson had dared her to jump off a cliff while they were on holiday in Menorca, and she had shattered her coccyx as a result.

By this point, with lockdown in force and external stresses in their lives, it seems the couple were feeling the strain.

Anna was mourning the death of her uncle from coronavirus, which she revealed on social media with the words: ‘It hurts my heart to say my lovely Uncle Geoff has lost his fight against Covid-19.’ Sue — who had had Covid — meanwhile was worrying about the well-being of her mother and family.

The end of this power couple — announced this week — has, then, not taken anyone totally by surprise.

In the ‘tribe’, as Perkins calls it, of their friends, it has been clear for a good year that their relationship has been struggling.

A friend says: ‘They were on and off for quite some time, for months. They then actually broke up before Christmas.’

The last thing which Anna did was to film a forthcoming series of Naked Attraction, the Channel 4 dating show she has presented since 2016 in which singletons pick partners by viewing their naked bodies, and then she moved out.

No WONDER Richardson wrote that she was bidding farewell to a ‘SHOCKER of a year’ on December 31 — and no wonder she revealed on Valentine’s Day this year that she was sharing her bed with the love of her life — her rescue dog Tig, a Staffie-whippet cross — with no sign at all of Sue Perkins.

After eight years as a couple, their profiles higher than ever, it seems that they decided they were better apart.

The friend adds: ‘I’m afraid Sue was quite cold about it and it is fairly acrimonious between them.

‘It was one of those, “It’s over, off you go” break-ups rather than a, “Why don’t you carry on living here while you sort yourself out”.

‘Normally that means that there is someone else involved but that is not the case here.’

Anna moved back to a ‘bolt-hole’ next door to her mother’s house in Staffordshire. (She bought it ten years ago and her brother also lives on the same street.)

She has recently been back in London, filming a new series of Changing Rooms, but hasn’t gone back to what was their shared home, a spacious 1930s villa.

By all accounts, the issue looming over the break was painful, but simple.

‘Anna wanted babies and the whole nine yards but Sue accepted that it wasn’t going to be possible for them,’ said a friend.

‘It had been coming a long time. Career pressures were a big part of that. When you are both in the media and you both are quite driven in competitive careers it does not make it any easier. I think that Anna wanted it to work a little bit more than Sue did.’

Awkwardly, Richardson took on a role promoting ‘adoption for all’ on her social media in September last year, just as their relationship was hitting the buffers over Perkins’ reservations on the topic.

Sue Perkins, 51, was diagnosed with a benign brain tumour in 2015, after they got together, which made it impossible for her to have children.

Anna Richardson, meanwhile, discovered back in 2008, while making a TV show, that she was infertile.

Anna’s response was to hope to adopt — she had been hankering since 2015 when she spoke about how ‘it would be nice to create a little unit.’

She said last year: ‘I can only speak for myself, not Sue, but I really want to do the training [to foster] and welcome a child into my life.

‘I feel keenly that I’m getting older, that time is running out.’

But Sue, after considering it, seems to have decided against. Instead she took turning 50 as her cue for a ‘seismic’ re-examination of her life and priorities, which meant moving on from the glamorous girlfriend who openly adored her.

Speaking on a podcast last year she said that she had undergone a classic midlife crisis before turning 50 in September 2019.

‘I felt a curious liberation when I crossed the threshold of turning 50. Six months before I was almost entirely unbearable. I had a classic, lowest-grade, entry-level midlife crisis.

‘I wanted to be somebody who didn’t behave the way everybody else behaved, I wanted to run contrary to the narrative. But now, I just got sucked straight into that.

Ominously for her relationship, she had ended a previous romance ‘badly’ and ‘stupidly’ when she reached 40.

That was with the artist Kate Williams — the two of them had shared a home in Cornwall. She said that it was a decision which had, in fact, ‘decimated’ her life. ‘I feel that something seismic should happen,’ she said.

The romance with Richardson blossomed in 2013, after a Halloween party. Anna Richardson had recently separated from Charles Martin, her film director partner of 18 years. She had known Sue Perkins for years, but when they met again at a party an attraction was awakened.

She said: ‘When I was invited to the party, I was told Sue would be going and I felt, what, a frisson? A spark of interest?

‘It was an extraordinary night. I was dancing on the table. It felt like a defining moment in my life.’

That Richardson fell for a woman was something that she took entirely in her stride.

For me, it’s just a case of I am who I am. I’m not interested in being labelled gay or straight, my sexuality is fluid. I just happen to have fallen in love with a woman — simple as that,’ she explained.

She went on: ‘All I can say is there was an understanding between us, and for me the planets aligned and I just thought, “This person is extraordinary.” ’

Both women have struggled individually to gain equilibrium. 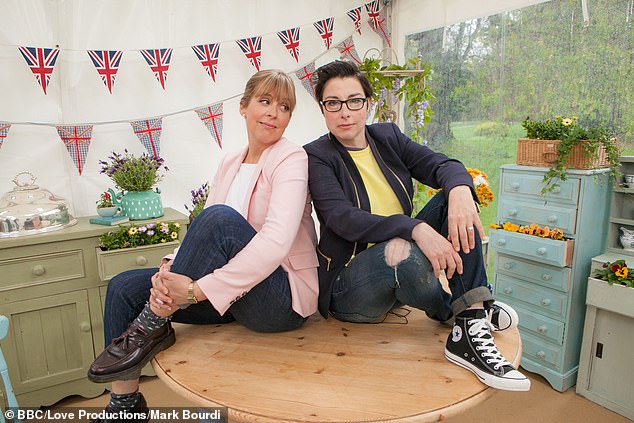 Giedroyc was Perkins’ partner in comedy stand-up for decades before they achieved mainstream fame as the presenters of the phenomenally successful The Great British Bake Off, then on the BBC

Richardson says that she has been in therapy for 15 years for anxiety and depression. Her grandmother killed herself.

Now trained as a hypnotherapist, she founded Mindbox, an online subscription-based service offering techniques to help cope and overcome common feelings of stress and anxiety.

Perkins, meanwhile, needed therapy to help her over the ‘pain’ of the end of her relationship with her previous girlfriend. She also finds that the benign tumour can ‘mess up’ her moods.

And perhaps both were simply too intense and too alpha to form a lasting partnership — with Sue constantly talking about being ‘specky’ and not ‘ornate’ like other TV presenters, which you could say would include her very glamorous girlfriend.