Queen Elizabeth has had a fairly tough 2021. Her year started off with her grandson, Prince Harry, and his wife, Meghan Markle, doing a tell-all interview with Oprah Winfrey in which they made several bold claims about the royal family. One of those claims highlighted an instance in which someone presumably close to the queen was concerned about the skin color of Harry and Meghan’s then-unborn son, according to CNN. During the same time, the queen’s husband, Prince Philip, had been in the hospital for a month, according to ABC News. He was discharged and transported back to Windsor Castle about a week after Harry and Meghan’s interview aired, and he died less than a month later.

Elizabeth was surrounded by her family for her husband’s funeral, but things looked much different because of the ongoing coronavirus pandemic, and she was forced to sit alone in a pew, due to local government regulations, according to Today. In the months that followed Philip’s funeral, the queen would have a couple of scandals on her hands; there’s an ongoing investigation into claims that staffers made, accusing Meghan of bullying, according to Entertainment Tonight, and, in August, the queen’s son, Prince Andrew, was sued for sexual assault, according to The New York Times.

And while you might think that’s more than enough for the queen to have to deal with in one year, there’s even more on her plate these days. Read on for more. 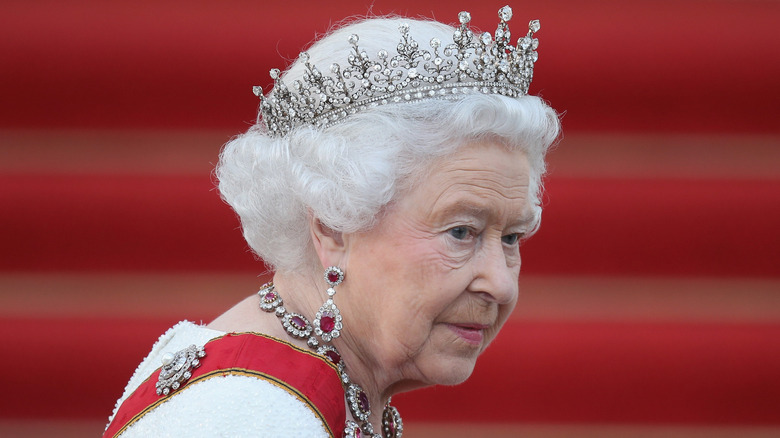 Queen Elizabeth hasn’t had the easiest start to September. On Friday, September 3, Politico published information about leaked documents that detailed the royal family’s protocols that will commence the moment she dies. The leaked plan, called Operation London Bridge, includes every detail from who will be notified first, to when Prince Charles will be named king, and everything in between, leading up to the queen’s funeral. “That someone has chosen to leak those for the monarch and that Politico has chosen to publish them is not only irresponsible but depressingly insensitive—especially given how the Queen said farewell in April to Prince Philip,” Dickie Arbiter wrote in a piece for Express after the leak.

And, as if that wasn’t enough on the queen’s plate, there is some major drama unfolding that has to do with someone very close to Prince Charles. According to Newsweek, Michael Fawcett, an aide who is extremely close to the future king, resigned after he was accused of offering “to help a Saudi tycoon secure a knighthood and U.K. citizenship in return for charity donations.”

Unfortunately, things don’t seem to be settling down any, either. As Newsweek points out, there will be an increased focus on the royal family in the coming months thanks to the new film “Spencer,” which highlights some aspects of Princess Diana’s life. There will be a new season of “The Crown” released before the end of the year, too.