Nobody likes an unwanted visit from their mother-in-law and now the wife of a psychic has claimed that her late relative’s ghost pops in on to the bedroom she shares with her husband on a regular basis.

Appearing from Llandudno on Today’s This Morning, Jane Drew revealed her husband David’s late mother, Joan, who died in 1979, likes to visit the couple when they are ‘at their most relaxed’ at night.

Jane Drew has been married to her psychic husband since 1985 and has written a book, entitled The Psychic’s wife, where she reveals how spirits 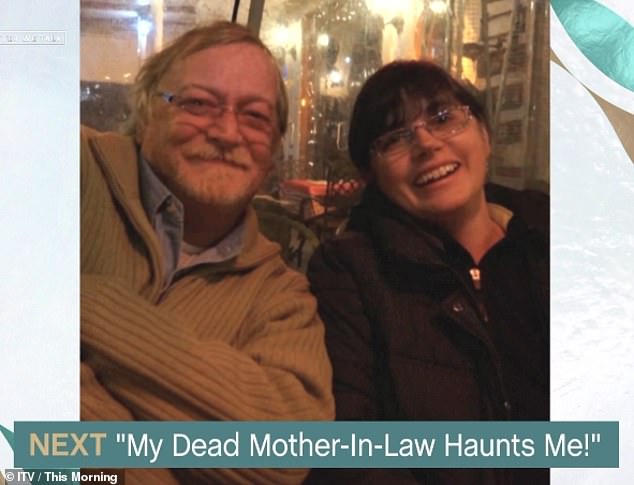 Jane Drew, pictured, from Llandudno has been married to her psychic husband David since 1985. She’s now written a book, entitled The Psychic’s wife, where she recounted her marital life with spirits taking over her home 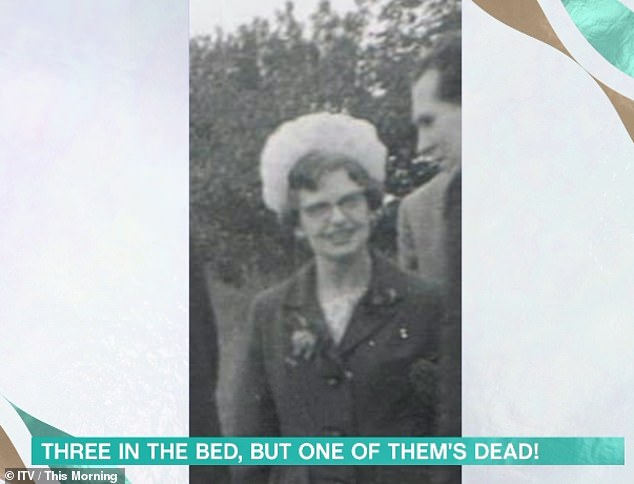 Jane said her mother-in-law, pictured, who died in 1979, liked to visit the couple at night in their bedroom

David explained he’s experienced paranormal incidents ever since he was a toddler.

‘I’ve been psychic the whole of my life. My earliest experience, I remember, I was about about three or two years of age.

‘I was in the bedroom and when I was fast asleep, I would be woken up and a little girl. She used to jump up and say “boo” on the side of the bed then she’d disappear,’ David said.

He added that went he woulds perched on the side of the bed to see where she had gone, the girl would jump on the other side of the bed, in what he considered ‘good gun.’ 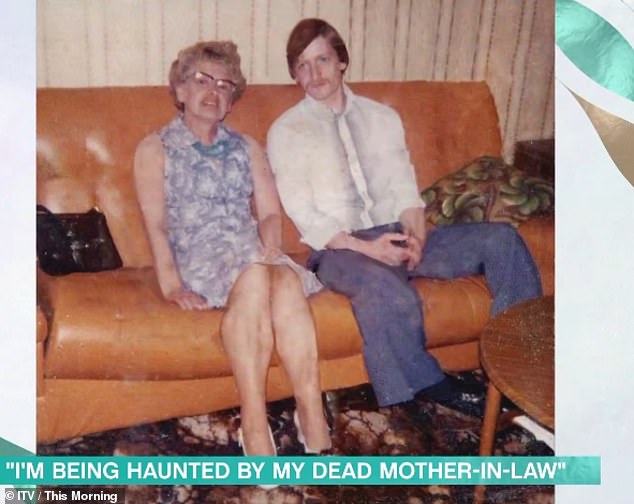 Pictured: David with his mother, Joan, in the 1970s. David said he was comforting to know she was living on in the ‘next world’

‘I then remember, I had a den at the bottom of the garden like most boys do, I used to go down there and play with other spirit children,’ he said.

‘His mum thought he got an imaginary friends,’ Jane said.

The couple met at one of David’s shows in Blackpool in 1985 and married a year later. By that time, David’s mother had been dead for six years.

Jane revealed she experienced spirits early on in the couple’s marital life.

‘The first time was very, very early on. We were sitting in the lounge watching TV and David shouted something – I can’t remember exactly what – something jokey to his spirit helpers and all the knives and forks in the kitchen started rattling,’ she said. 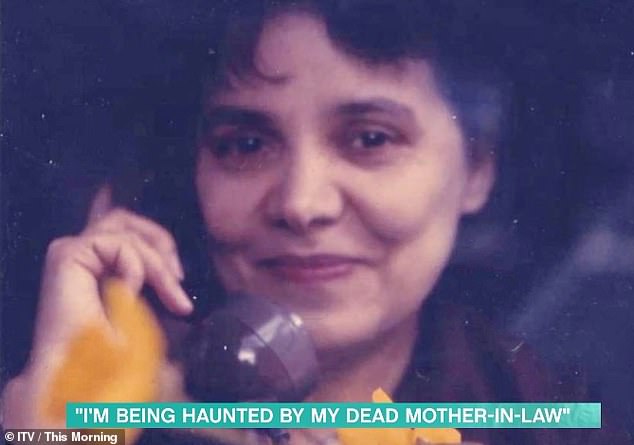 Jane’s mother, Mary, who passed in 2019, also liked to visit the couple from time to time, Jane and David revealed

She added she thought to herself, “This is going to be quite a ride”.’

The couple explained both their mothers like to visit them, with Jane’s mother Mary, who died in 2019 at the age of 89, and David’s mother Joan sitting on the bottom of their bed.

She explained that when she’s on the verge of sleeping or waking, she’s ‘more able to pick up that they’re there.

‘I don’t actually see her,’ Jane clarified. ‘What I do is, I feel her on the bed.

‘She sits on the side of the bed when we’re in bed and gives a couple of bounces on the bed so that we know that she is there.’ 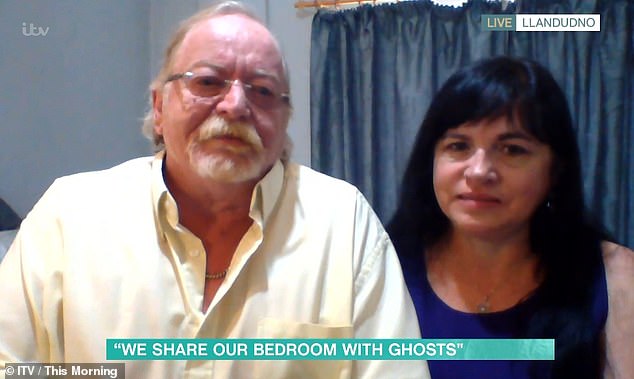 Horrified Holly Willoughy said the last thing people would want is a parent-in-law being ‘anywhere near the bedroom,’ when they were being intimate.

David and Jane revealed it had never been an issue.

‘It could be a mood-killer, just as like if you went into your son’s room and caught him in the personal circumstance, you don’t want to be there anymore than they want you to be there,’ she said.

David added the thought their mothers were visiting them was ‘comforting’ to the couple.

‘She comes to visit from time to time but when we lose someone, we lose the physical person. We can grieve the loved one, but if we have the knowledge they are living on in the other world, that’s nice to know it,’ he said. 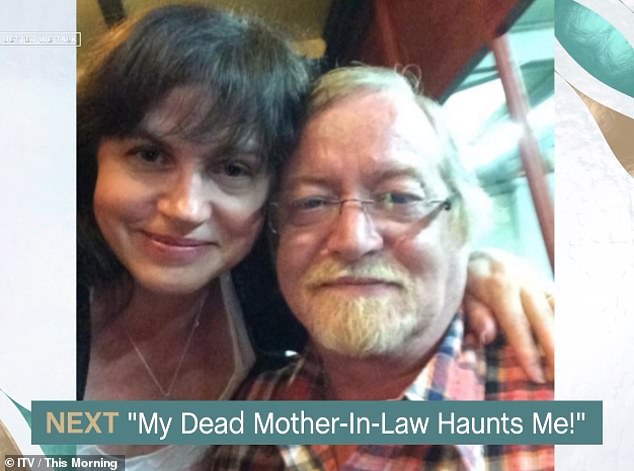 Jane, pictured, has published a book, entitled the Psychic’s wife, where she recounts her marital life wirth spirits 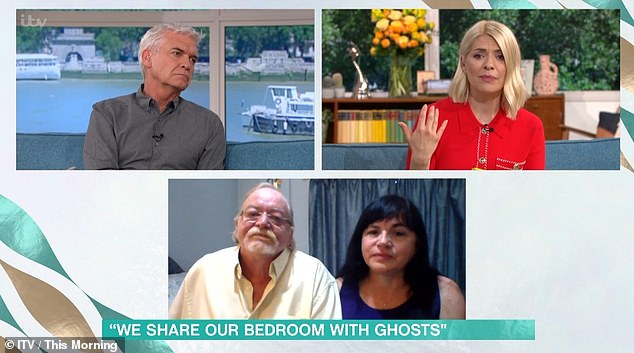 Holly Willoughy said people wouldn’t want their parents-in-law anywhere near the bedroom, in case they got intimate

David said he wanted other people to embrace their psychic abilities, if they had them.

‘I think if anyone has the psychic ability, they should use it, it’s a god given gifts,’ he said.

But he tempered that not all ghosts were friendly.

‘Everyone lives, everyone passes over from this life into the next, life is eternal for everyone, death doesn’t make a fool into a wise man or a sinner a saint,’; he said.

‘You’re still the same person when you pass over,’ he added.