The Handmaid’s Tale Season 2 has been a race against time for Offred. Over the course of her nine-month pregnancy, she’s worked hard to escape the horrors of Gilead with her unborn child. She spent the entire first trimester trying to get out, only to fall at the final hurdle. Then she gave up and tried to live with the system she’s stuck in. Now hope has returned, but it’s too late for her to escape before the baby comes. What will happen to June’s baby on The Handmaid’s Tale? Next week’s trailer makes it clear the child is not waiting to be born until after she finds a way to Canada.

The problem for Offred is the system doesn’t care whose baby she’s actually carrying. It only cares who owned her at the time it was conceived. Everyone is telling this polite fiction Offred is just this surrogate mother figure for a barren Wife and the baby is Commander Waterford’s. But as viewers have known from Season 1, it’s the Commander who is infertile.

Most of the men are. In Offred’s case, Nick is the real father, but in truth, most of these handmaids are carrying children completely unrelated to the family they’re supposedly serving. The American representative last week brought this back to the fore, that Gilead is basically blaming women for a male problem. Either way, she has no rights to her own child and neither does Nick in the eyes of the law.

As is obvious from this week’s trailer, June, for all she hoped for escape upon learning Moira did, will not manage it. Her baby will be born here. Unless something goes utterly horrifically sideways, the moment she has it the baby will be handed to Serena Joy. Offred won’t even stay for the customary breastfeeding period. She will be out of the house, heading for a new placement. (So Eden can calm the heck down already.)

What happens to her baby then?

If the Putnam family are any indication, Serena Joy will be frantically trying to bond with a child not biologically hers. Offred’s absence might be a blessing here, as the longer Offred stayed around, the more Serena’s jealousy would grow. Though it’s doubtful Offred would pull a Janine, postpartum is a thing, and you never know.

If Offred has a boy, Commander Waterford will be parading the child around, and chances are he will be raised up a spoiled prince. If it’s a girl, the vision is slightly less rosy, but the glimpses viewers have had of Hannah, dressed richly in pink, are probably a good indication of her future. 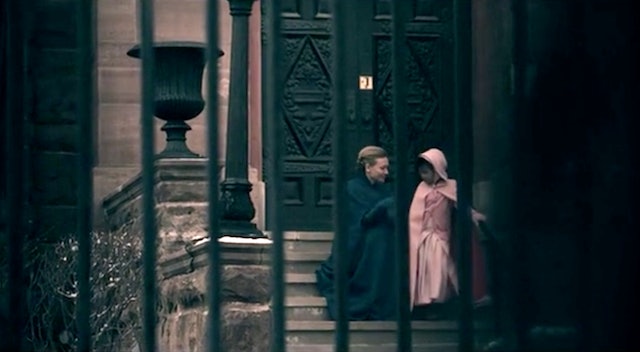 But this is only if things go according to plan.

There is no guarantee the baby Offred is carrying will be born healthy and happy. There are obviously doctors who are available when the situation is dire, but most of Offred’s pregnancy monitoring has been done by Aunt Lydia, and half her recommendations are wood-witch level mumbo-jumbo. Moreover, the fertility crisis is a male one. That means June and Luke could produce a healthy baby because Luke had non-damaged sperm. There is no indication one way or another Nick is blessed with the same.

Then there’s everything else that could go wrong in a home birthing. The fact is, today, in the Year of Our Lord 2018, somewhere between 700 to 900 American women die a year giving birth. The chances of things going badly when Offred goes into labor are higher than anyone would like to admit.

Would this give Offred a chance to escape to Canada? Absolutely not. The moment the baby started coming, escape was out of the question. The best option she has now is the one she accepted before: She’s having this baby here. The child’s best option is letting it go to the Waterfords. And Offred’s best chance is to get out alone, after she’s dismissed, and before anyone looks at her twice.