It's a surefire way to bring the sun into your life this weekend.

Warning: the following colour may make you freak out.

But bright sunshine, egg yolk, mustard, lemon – any buttery shade to be exact, is quickly becoming the hottest hue around.

And while the majority of England sipped cold ciders in beer gardens on bank holiday Monday, I ventured into our over air-conditioned office (the only plus side was that I got a seat on the Northern line).

So if I can’t bring a G&T, I decided to bring a dose of vitamin D. . . by swapping my normal black Monday attire to sunny yellow. 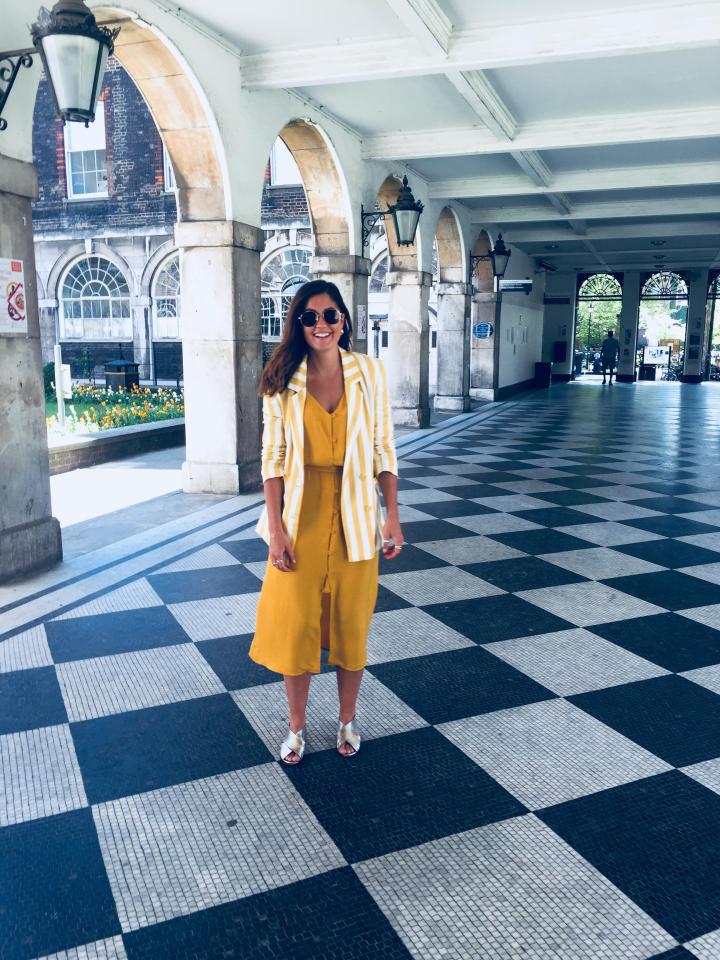 It took some guts, but I realised it is actually wearable.

After seeing it on the SS18 catwalks for Balenciaga, Ralph & Russo and Christopher Kane, I feared the day that it would trickle down to my wardrobe.

Kim Kardashian wore a zesty bustier dress with lace-up details and thigh high split to a dinner in NYC on Tuesday night.

While Beyoncé,  Holly Willoughby and Gigi Hadid have favoured the sunshine shade, so  I’ve been encouraged to follow suit. 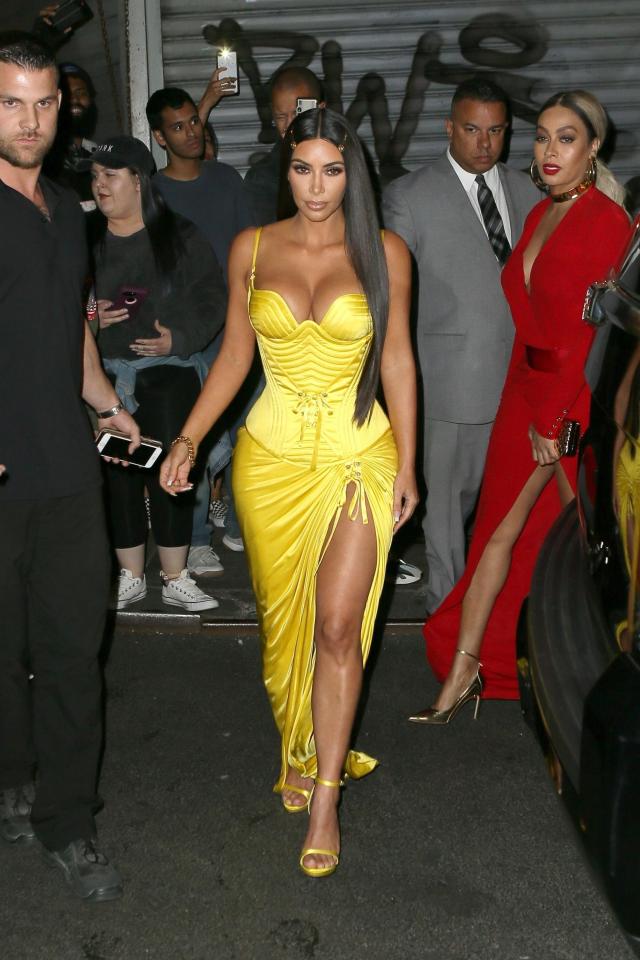 I wore  a button down dress, £13, from Primark and smartened it up with a £49.99 striped blazer from Bershka – ideal for the office and also keeping me covered from the icy air-con.

Contrasting shades is a simple way to tackle the tricky colour – or, ease yourself in by teaming a yellow tee with a pair of jeans.

Oh and on the bright side, apparently wearing yellow is said to make you happier – so here are my top picks to keep you smiling. 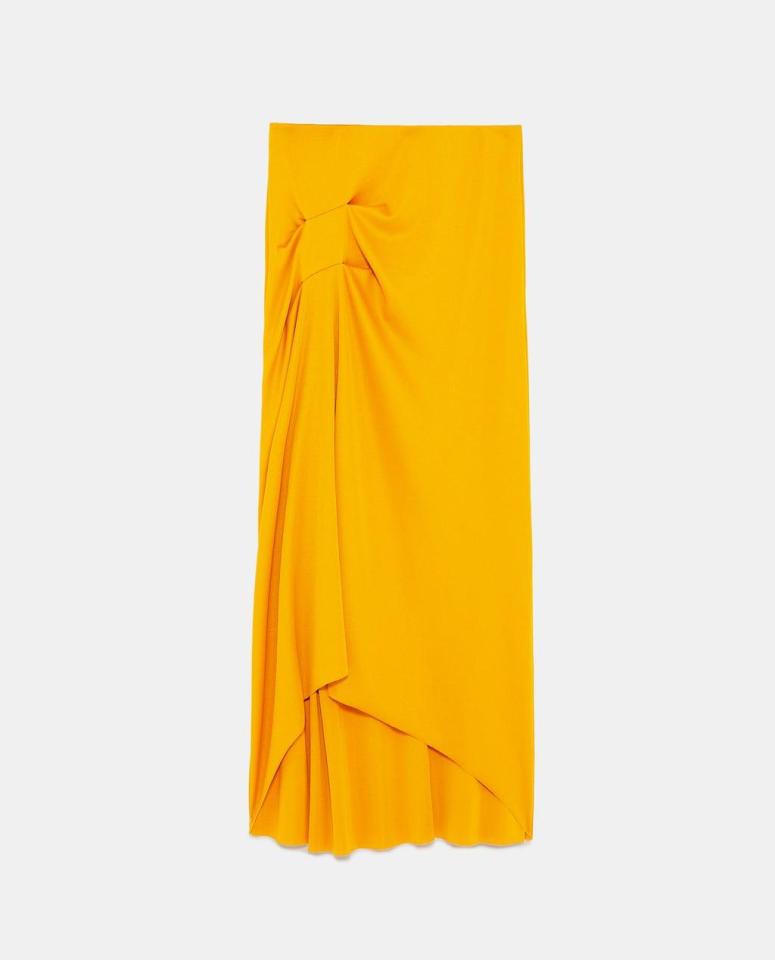 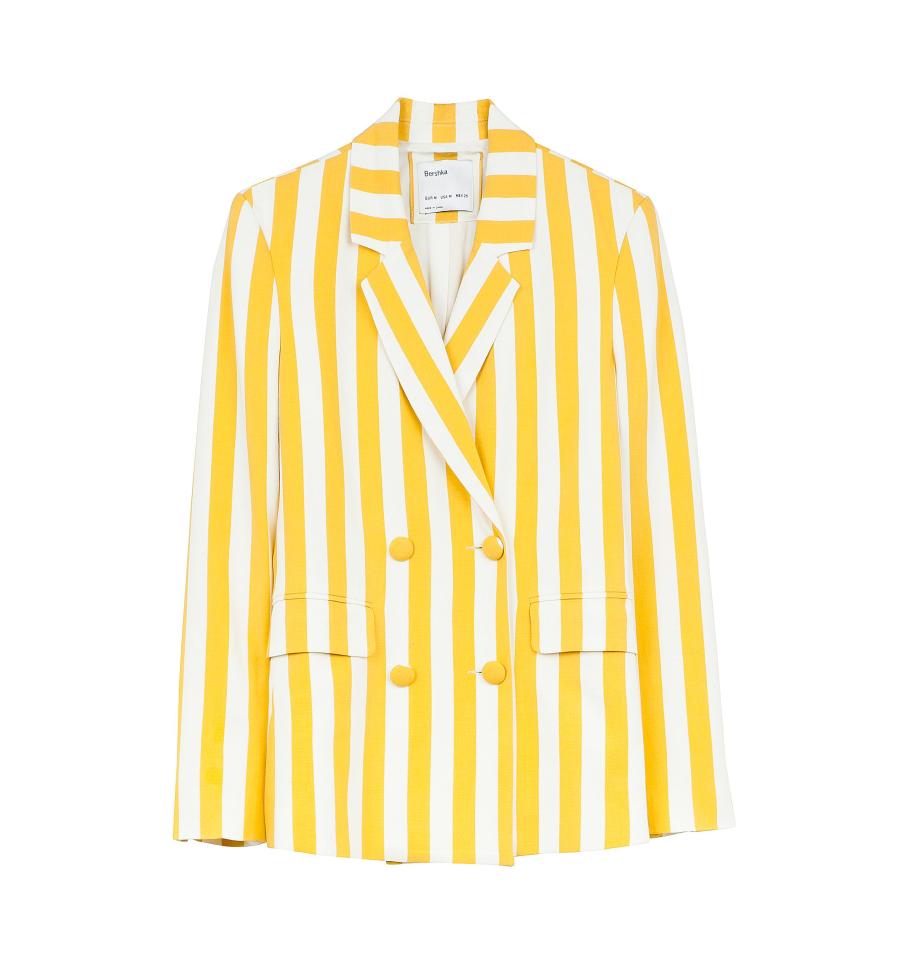 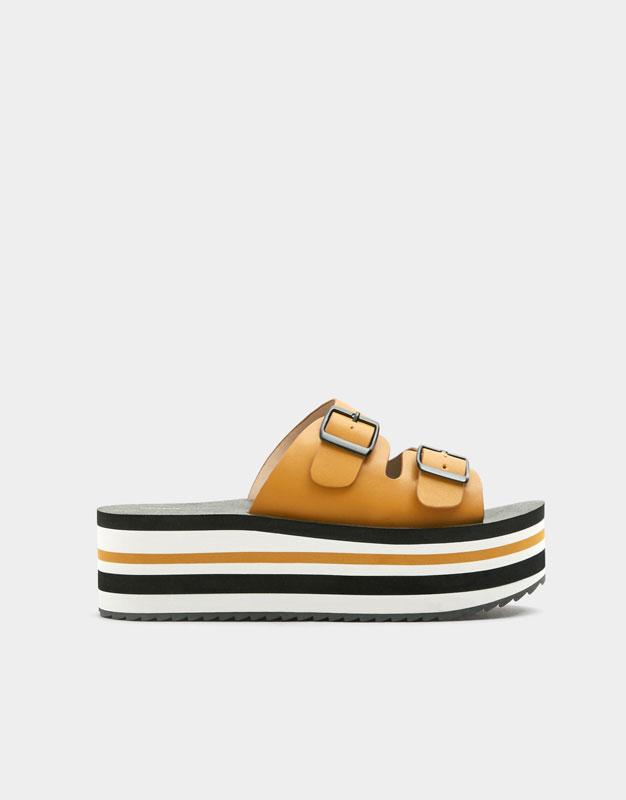 Queue eye roll and hefty sigh as I bring up the A-lister who has quite possibly been everywhere this week.

I’m not part of the Rihanna Navy by any means, but recently I have been worshiping her wardrobe and confidence.

When she turned up to the Met Gala on Monday in an outfit that looked as though it had been hand-crafted by Jesus himself, I couldn’t decide whether she was brave or bonkers to come dressed as the Pope – even if the party did have a religious theme. 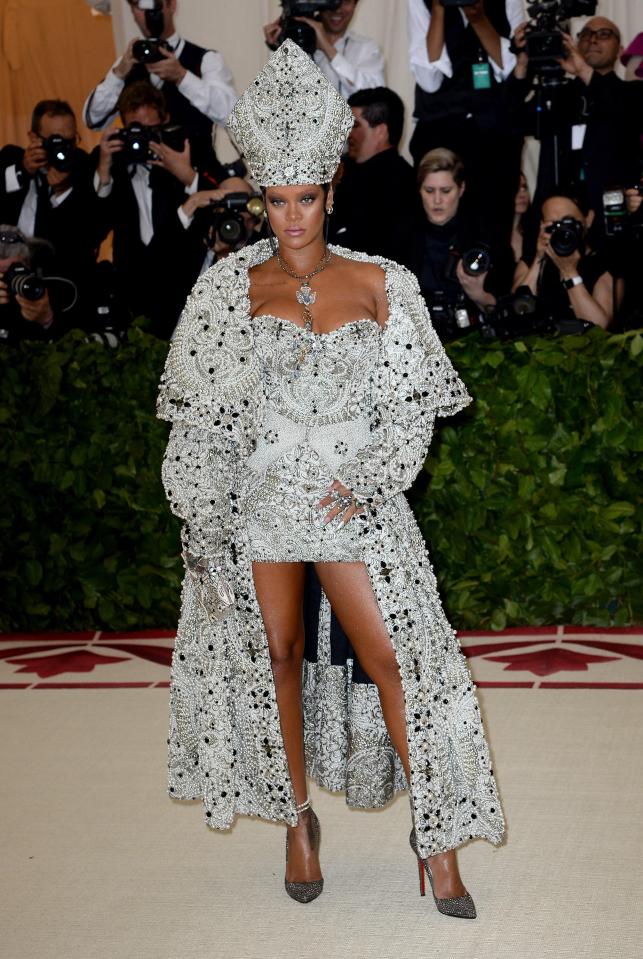 And it’s not the first time she’s stepped out in something that’s made me question her sanity.

But that’s the great thing about her, she often looks like she’s going round the bend with her wacky looks – yet, she doesn’t care less.

From thigh-high UGG boots to balaclavas, RiRi proves that if you are going to dress nuts then at least do it with pride. 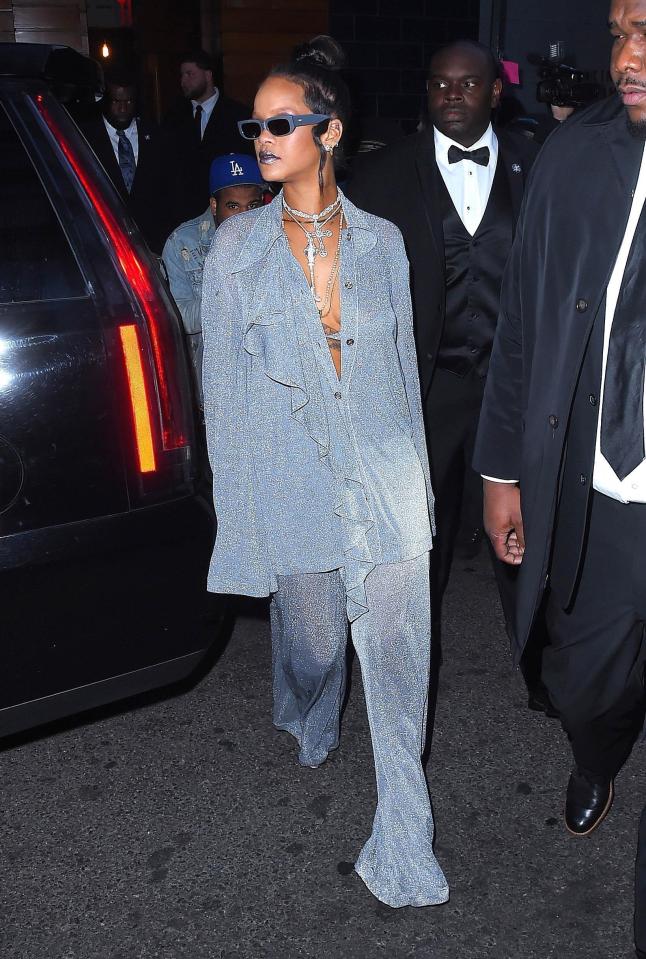 I mean, if her post-Met uniform to the Gala after-party is a pair of sparkly pyjamas – then that’s what you’ll see me in every weekend from now on, you can go from bar to bed without missing a beat.

On top of her bold outfit choice, the 30-year-old has also launched her lingerie line Savage X Fenty worldwide today.

Catering for all shapes, cup sizes start at 32A and go up to 44DDD, with saucy corsets and t-shirt bras available. 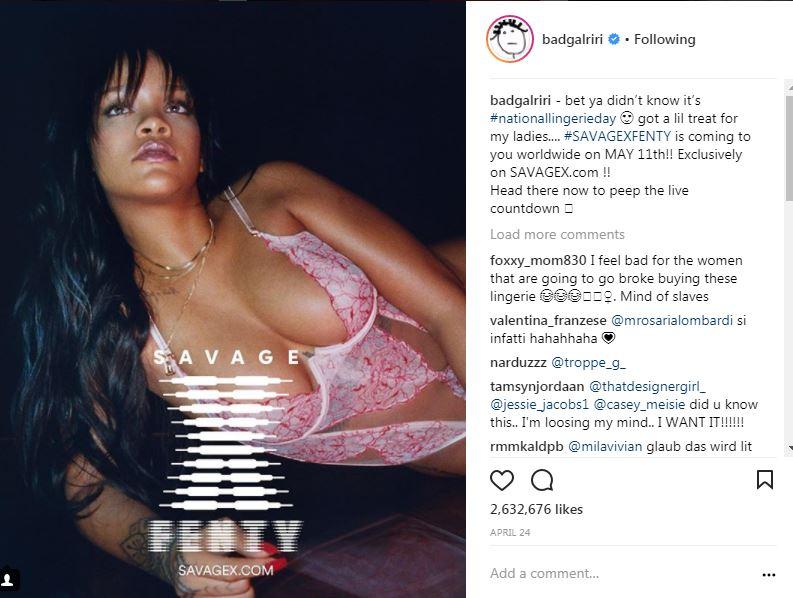 Teasing fans with a series of sultry photos in the lead-up to the launch, Rihanna showed her unbreakable confidence and curvaceous figure as she posed in saucy corsets from her own collection.

So while I used to think she was living on another planet, I now think we should all take note of her raging mad looks.

As Rihanna proves that a little crazy and a lot of confidence will have you feeling a million dollars – even if it is a pair of racy undies or an outfit fit for the Pope.

CAN WE JUST TALK ABOUT: MICRO BAGS

It’s a trend that involves pulling out a magnifying glass just to get a good look.

Don’t get me wrong, I’m all for downsizing your arm candy as holding on to leftover lunch, a heavy make-up bag, a bin-load of receipts and a bunch of other random knick-knacks you didn’t realise you had, is not good for anyone's back or shoulders.

But I do expect to be able to carry my phone, keys, purse, lippy and an umbrella (due to typical British weather), as they are the basics. Right?

Yet super small styles are quickly rising up the style ladder and quite frankly, I’m having to squint to see them. 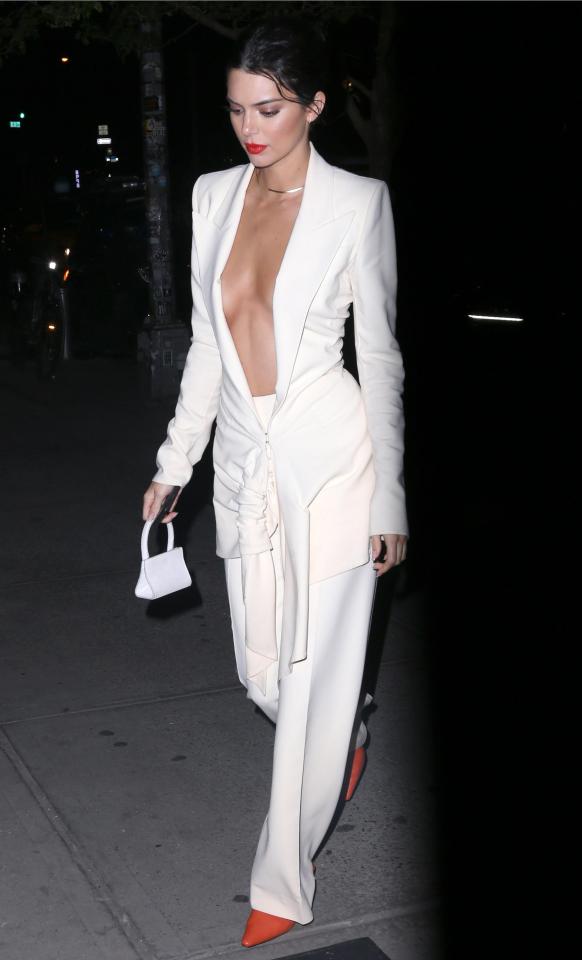 At the same event as sister Kim,  Kendall Jenner held an itty-bitty bag from Jacquemus costing a whopping £360.

Measuring just 12cm x 6cm, it looks as though it would just about fit her red lippy in.

Rita Ora carried a super-small style to the Met Ball on Monday and sisters Gigi and Bella Hadid have also championed the teeny tiny size.

I guess for them, they don’t have the worries that we do when it comes to packing light.

Are my new shoes going to give me blisters? Highly likely so better add a pack of plasters to my bag.

What will keep my entertained for my journey to work? Better add a book or headphones.

For us mere mortals, micro-bags are just not practical – as we don’t have assistants holding onto all our belongings.

They are cute and often smart looking, but if it doesn’t even carry my phone, then sadly it’s a no from me.

Instead, I’ve picked three on-trend styles that are small, but will still squeeze in your essentials with enough room for chewing gum. 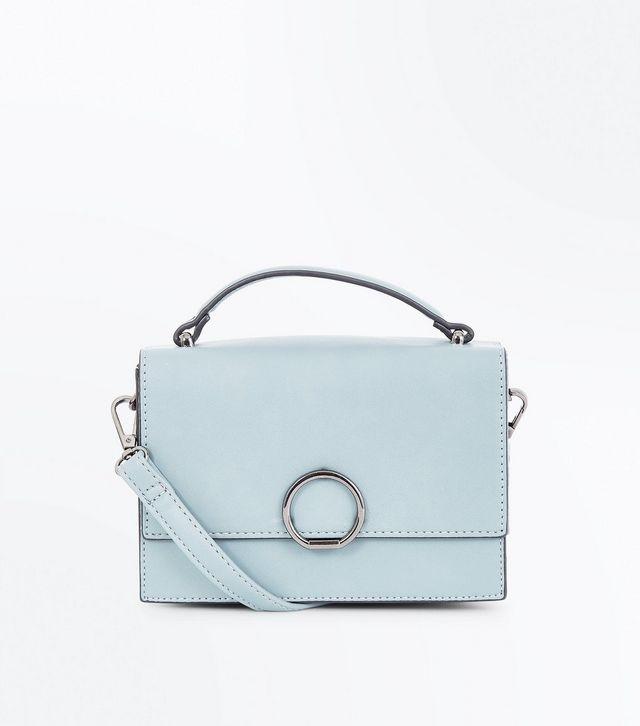 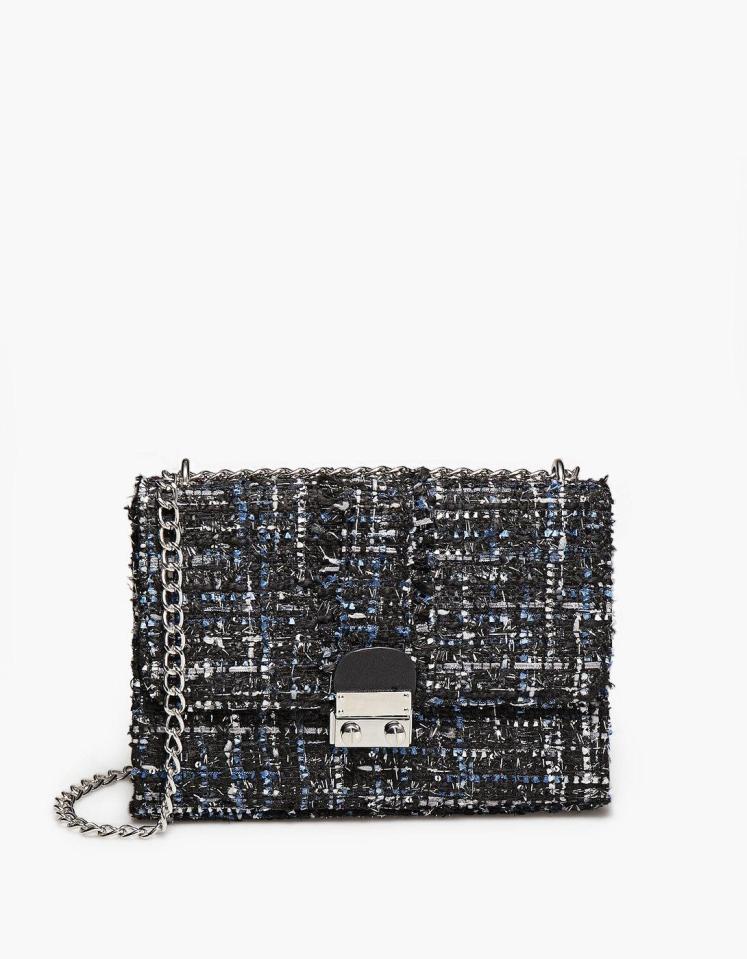 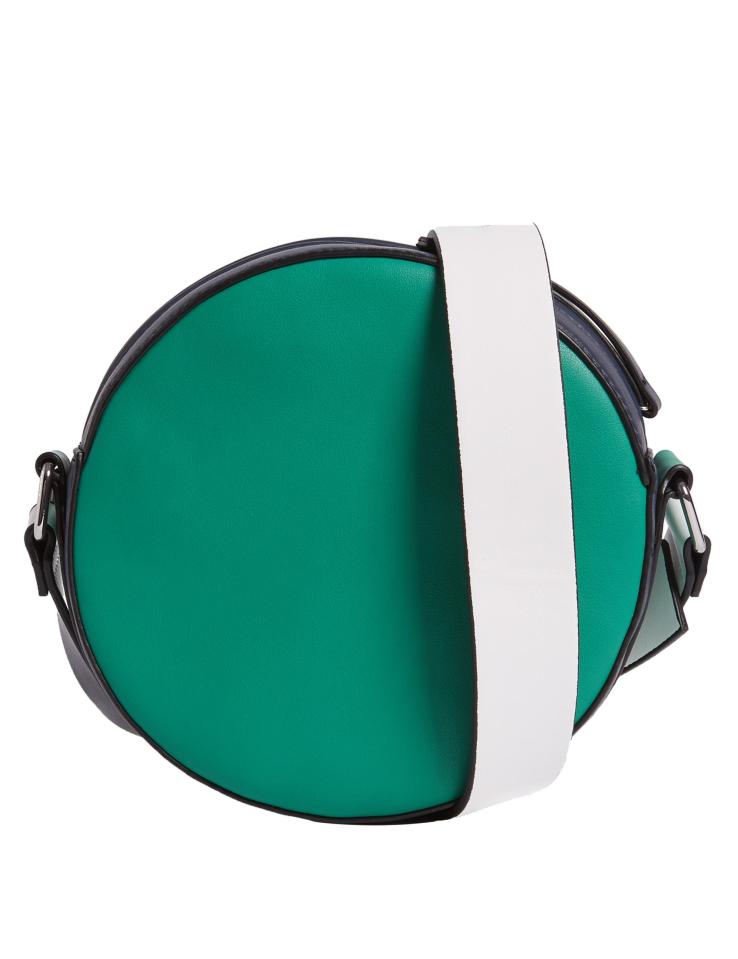 Last week, we brought you the £69 M&S dress that will transform your summer wardrobe.

Here are 12 plus size prom dresses for under £35, to make you feel like a queen.